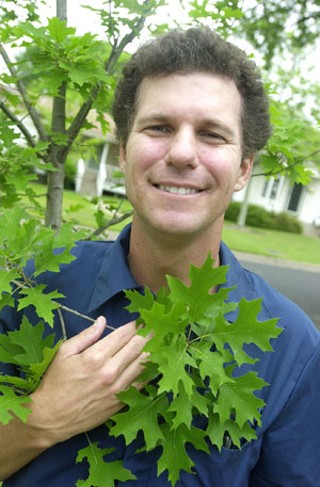 How green is your lawn? Scott Johnson, founder of the Central Texas Electric Lawnmower Program, thinks it can become greener if you use an electric mower – and he wants to help you buy one.

His fixation goes back to a 1995 Time magazine article (which he still has). Johnson read there were no Environmental Protection Agency emission limits for gas-powered gardening equipment like lawn mowers. "We hadn't done any work on educating people on other options," he says. Since putting a goat on every lawn was unlikely, Johnson came up with another scheme: Go electric. "It's much easier to control the emissions from a power plant than a four- or five-horsepower engine," he explains. Other states, including Arizona, had similar projects, so Johnson adopted their best ideas and in 1996 took his plan to Austin Energy. They loved it, and 10 years later, the program has put 1,850 electric mowers into the hands of Austin's gardeners and has safely recycled about 1,800 gas mowers.

The scheme is to offer a 20% rebate off the cost of an electric mower: Retailers and manufacturers kick in half; the program raises donations for the rest. That incentive kick-starts people's interest in trading in their old smoke-spewing oil-burner for a new electric, maybe even cordless model. Johnson has been a bit surprised by some of the swaps. "Some are relatively new, 1 or 2 years old, and the rebate is less than what they could get on the open market," he says. "But some people do it to do the right thing."

Johnson knows about learning to be green. "When I was in my early 20s, I wasn't as pro-environmental as I am now," he says. That changed after he graduated from Marietta College in Ohio and spent time in Houston and Los Angeles. "You hear about pollution and sprawl on a daily basis," he says, and that mindset came with him when he moved to Austin. But it's not just about air quality: Going electric means fewer domestic oil spills and less landfill waste, as people mulch their clippings. "As the city grows," said Johnson, "and we get closer to violating EPA and federal standards, we're being proactive."

For more details about the program, call Scott Johnson at 389-2250 or visit www.cmpbs.org/electriclawnmower . The Central Texas Electric Lawnmower Program holds its next event at the Kyle Home Depot on Saturday, April 19, 8:30am-1:30pm.

Eco-read: The World Is Burning: Murder in the Rain Forest – The Tragedy of Chico Mendes by Alex Shoumatoff 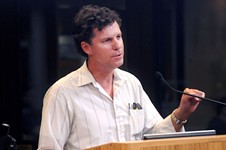 No, You’re Out of Order!
Wild times at the Public Safety Commission 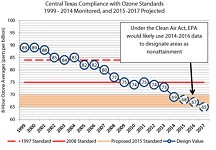