When I spoke with Austin Green Art's Randy Jewart last week, he was at a Keep Austin Beautiful party in Waterloo Park, where he'd been helping kids fashion plastic bags into works of art. The activity, he explained, gave kids the chance to learn about the environmental impact of the bags while also "taking the material and cutting it and manipulating it and ironing it – getting that sort of visceral connection to it." Jewart observed the scene as moms took pictures and kids ran around in plastic hats with words like "Toilet Tissue" emblazoned across the front. "To me, this is the community basis for a sustainable culture," said Jewart, "where you're a participant in the cycle of reusing materials, of meeting cool people, of educating yourself while you're doing these things."

Underwhelmed by the prospect that the environmentally conscious are doomed to lives of thankless, lonely lightbulb-changing and trash-sorting, Jewart hopes to see sustainable-minded people forming lively communities in which they can inspire one another, learn together, and maybe get a pat on the back for a job well done. It's with this in mind that Jewart invited environmental author/journalist/activist Bill McKibben to Austin this past March to rabble rouse at South by Southwest Interactive, and it's why he's working with Austin EcoNetwork on a project called Share 350, which will facilitate community-building among the eco-minded.

While community-build-ing has emerged as a central theme in his projects, it was only four years ago that Jewart, a sculptor, held "community art" in disdain. "The big lightning bolt for me, when I knew that I had to change my career," he explained, "was listening to William McDonough." Jewart heard the sustainable-architecture guru on his car radio and was so impressed, he pulled the car off the road to listen. "I couldn't just be an artist traveling around the country and getting to go overseas and make art that didn't contribute to this movement," said Jewart. "Ever since then, it's been this sort of gradual synthesis of my creative life and my environmental life." 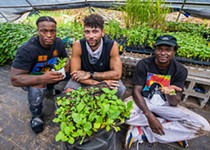