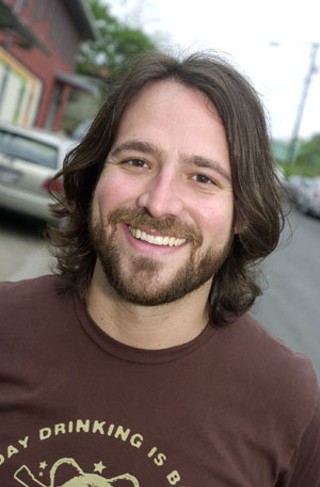 It's a rainy, humid Friday morning, but Joshua Bingaman is all smiles: His Progress Coffee is teeming with patrons drinking organic, fair-trade coffee out of compostable cups. Four years ago, Bingaman and his wife, Sarah, left the Mission District in San Francisco for Austin, where they scoured the city for an old, dilapidated warehouse in which to start an environmentally friendly, community-centric cafe. They found it, off of Fifth Street, two blocks east of I-35. "It was an old loading dock and storage warehouse, so we ran all the electrical, water, did everything with recycled materials, instead of building somewhere," Bingaman says. "We call 'developing an area' using something that's already existing. That is why it's called Progress. The word 'progress' means 'a continual betterment' ... and we literally wanted to take something and make it continually better."

And by that, Bingaman means that all the water items in the cafe are low-water usage, the cups are 100% cornstarch, the paper goods are nonbleached and compostable, the fluorescent bulbs are clear-coated so they won't break, their cleaning products are eco-friendly, and the staff hand-separates glass and plastic and hauls it to Ecology Action on bikes.

Two years into the venture, Progress was a happening hub, but Bingaman found out it wasn't easy – or cheap – being green. So he enlisted restaurant consultant Troy Authement, a rural character at heart, to help revamp the business. "It's about a costing mentality, because a lot of small businesses, they just worry about cost, and what they never stop to ask is whether we as consumers are willing to pay a little extra for the better difference." Authement says.

The pair's recent venture is Progress Green Square, a platinum Leadership in Energy and Environmental Design-certified restaurant and part of the larger Green Square, a 13-acre, master-planned, commercial green site in Round Rock, developed by Designated Tree. Due to open in October, the restaurant will use city sewage and city water, but much of the power will be generated by solar panels and wind power.

"That will be on the forefront for future businesses of Austin, hopefully," Bingaman says. "And there's nothing like that where that's going to be. ... All that's up there is a Wendy's and a Starbucks, and there's a clientele up there that will buy organic, that will come to Progress, that will support that concept."

Enviro book: The Recycler's Handbook: Simple Things You Can Do by EarthWorks Group