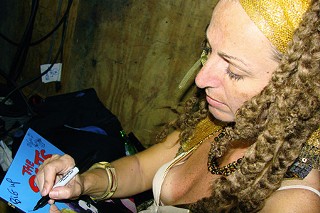 WRAP IT UP; I'LL TAKE IT If you wrap it up in this risky age of the scrump, you might take heart in Richard Berkowitz's story. After witnessing the AIDS epidemic take over the queer 1980s party vibe, the once-S&M-hustler decided to do something. He wanted to inform, even if the world wasn't yet ready to listen. Today is the last chance to see Sex Positive, the documentary that covers his tale (and yours, if you take heed). Fri., March 14, 9pm. Austin Convention Center, 500 E. Cesar Chavez, 404-4000. www.sxsw.com/film.

FIRST SIGN OF SPRING "My crowd is queer," says Robyn, the feisty (but not Feisty) first lady of club pop. Okay, that's according to us, but we'll concede to at least feisty first lady of club pop ... from Sweden. "They are mixed, gay and straight, old and not, some know my hits, some do not, some like the pop, some come for the lyrics ... I don't discriminate." Despite soundcheck issues (that really is the first sign of SX), her appearance at yesterday's Filter Party at Cedar Street – which she kicked off with the shit-kick slitherin' "Cobrastyle" – charmed and delighted, which she will surely do again at her showcase tonight, the Billboard Party and Perez Hilton's One Night in Austin on Saturday. See the Gay Place Blog for more. Fri., March 14, 1am, Pangaea, 409 Colorado, 472-8882. www.robyn.com.

DOES A BEAR SING IN THE WOODS? Why would he when he can sing at Lamberts amidst the likes of fellow Austin lovelies Amy Cook and Rosie Flores and the poignantly progenic A.J. Croce? Please feed the local bears or at least our gosh darn lovable local bear Nakia. His raspy baritone recalls the gutsy growl of Seventies lead men like David Clayton-Thomas, Gary Puckett, the Righteous Bros., and even Sir Elton after his balls dropped. Go see our very own Nakia at his showcase tonight, or we will personally come and eat ur pic-a-nic basket. Fri., March 14, 12mid, Lamberts, 401 W. Second, 494-1500. www.nakia.net.

ARI UPPED THE ANTI! We remember our first Slits experience. It was on Ruby Cheeks air-shift cleaning records for her show on WCEZ-FM, Jupiter-Tequesta (that's in Florida). We held the cover of the Slits' Cut (you know, the one with the brassy babes covered in mud) in our hands. We immediately ran to the production booth and slapped that puppy on the wheel. What proceeded to pour forth changed us inside profoundly. Like the time we first heard Patti, the Raincoats, and read Love & Rockets. Sigh. So, not to get all old lady on ya, suffice to say: We felt proud to see Slit lead nut Ari Up signing a slab to auction at today's Girls Rock Camp Benefit. Much more memory-loaded memorabilia will be available as well. All proceeds support Girls Rock Camp Austin. Fri., March 14, 2-8pm. Austin Java, 1206 Parkway, 476-1829. Free. www.girlsrockcampaustin.org.

THE SOUND OF ONE LIP ... SYNCING Last night, for some reason, the packed house that was huddled into Karma for Cut Copy ran out before seeing the performance art that is Tough Alliance. Weird. We stayed through amazing Bang Gang DJs as TA set up a projector screen for scenes of the ocean and beach while they played, of course. Jens Lekman was there, too, dancing next to us, just to tell us, "Yeah, you know they just lip sync." We watched. They pressed play, and their music, all produced by the Swedish duo in polo shirts, played. With vocals included. But their stage act was not a Milli Vanill. Not an Asslee Simp. There was speaker-diving, crowd-surfing, wasted microphone bangery ... and the ocean. Of course. They play again: Sat, March 15, 1am, Beauty Bar, 617 E. Seventh. www.thetoughalliance.com.