Show Us Your Bulbs 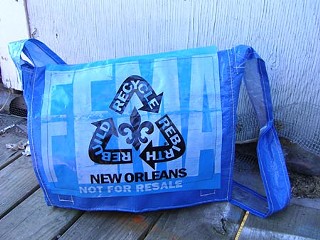 "So what did you do to get them?" This leering question is inevitably asked to anyone decorating their home with Mardi Gras beads. Wouldn't it be nicer if they asked, "Where did you get those?" With Mardi Lights made from the recycled plastic baubles, designed by New Orleans-based Unique Products, they will. Based out of a little gallery and workshop in the historic Crescent City Garden District (although eagle-eyed Austinites may recognize the lights from last October's Maker Faire at the Travis County Expo Center) recycling artists Heather MacFarlane and Mark Kirk gather the thousands of necklaces that are left to litter the streets after being thrown to the crowds from the floats during the city's monthlong parade season.

As legend has it, Mardi Gras beads must be caught. When the bead-thrower looks you in the eye, he or she is deeming you worthy of the beads and the magic they contain. If you miss the beads, they "lose their magic" and are to stay on the ground. Plus, considering the size of cramped parade crowds and the increase in pickpockets, it's not safe to scramble for them. Needless to say, New Orleans city streets are covered with the trinkets after each parade. 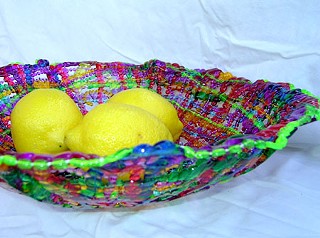 Each Mardi Light takes roughly 2 pounds of beads, but they're easy enough to find. "They're literally hanging from the trees," explained MacFarlane. While tourists and partygoers will scrabble on the ground, aggressively elbow innocent bystanders, and even expose themselves for the treasured strings of doubloons and prized pendants, it's the small, cheap beads that catch the attention of these artists. They collect them, take them home, unstring the beads, and pass them through a series of kilns and ovens to melt them into flat sheets. They then shape the delicately translucent and uniquely patterned plastic into everything from wall sconces to sun jujus (the voodoo equivalent of a dream catcher).

"The joke around here is that it took a thrifty Scot to work out what to do with all those beads," said MacFarlane. She's originally from Edinburgh, and Kirk is from the cold, wet Northern English town of Macclesfield (famous only for being the place where Joy Division's Ian Curtis decided to kill himself). It was beads that brought them together. Ten years ago, Kirk was driving from San Jose, Calif., to Pensacola, Fla., and decided to detour to New Orleans for Mardi Gras. He met MacFarlane on the street when they were both collecting beads, and now these migrants are helping the city deal with an eternal problem of very shiny trash.

How many beads are thrown during Mardi Gras each year? "No one really knows, because there are 10 major businesses importing them," said Mardi Gras historian Arthur Hardy, "and they don't want to tell each other." Many are left on the streets or get hung up on overhead obstacles. This means a real headache for the city, with the parade routes looking all year-round like they're bearing a strange, plastic fruit. "We're less than one month away from this year's Mardi Gras," said Mary Beth Romig, communications and public relations director for the New Orleans Metropolitan Convention & Visitors Bureau, "and we've still got beads hanging from trees up and down Saint Charles and from balconies in the French Quarter." 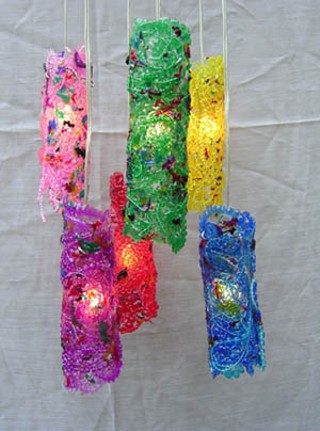 "It's all about recycling," explained MacFarlane. Since Katrina, the city has stopped all free recycling pickup services. This means residents can either pay $15 a month for the privilege of not filling up a landfill, they can settle for mixing all their recyclables in the trash, or they can come up with innovative uses themselves. The artists of Unique Products have taken some of New Orleans' distinctive trash and turned it into something gorgeous and maybe even lucrative. As well as the lamp shades, the company makes messenger bags out of recycled Federal Emergency Management Agency tarps and desk lamps out of detergent bottles and transforms old fiber-optic cable into garden lights shaped like – like so many ornaments in the city – a fleur-de-lis.

Plus, with online ordering, you don't even have to take your top off to get them.