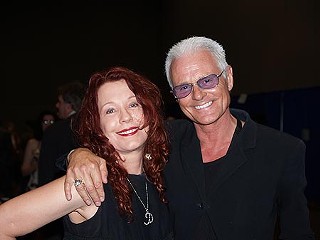 AMA 25 The 25th anniversary Austin Music Awards was absolutely everything I could have wanted out of a landmark anniversary: big names, big attendance, and big fun. The ballrooms of the Austin Convention Center were filled to capacity, and a line stretched around the block. There are always a couple of people that I'm truly honored to meet at the Music Awards. This time it was Bobby Whitlock who performed alongside his glorious wife, CoCo Carmel. Whitlock has many accomplishments, not the least of them being that he was a member of the legendary rock group Derek & the Dominos. Yes, he co-wrote, played, and sang on the Layla album. That makes him a god. I've loved Pamela des Barres ever since I read her first book many years ago. That she was friends with my sister, Margaret, was icing on the cake. So when I met her here at SXSW about five years ago, I tried to do all the right things to make sure we'd be friends, too. But one of the things I'd hoped for was to someday meet her talented ex-husband, Michael. Michael des Barres has done two things that endeared him to me forever. First, he starred as the high school punk Williams in To Sir, With Love, with Sidney Poitier, and he co-wrote the Eighties megahit "Obsession" with Holly Knight (and the two recorded it much more definitively than the group Animotion, who had the huge hit with it). Having also replaced Robert Palmer in the supergroup Power Station, des Barres has done voluminous television work. So, yeah, he was a highlight for me. Other notable moments included watching KGSR's Jody Denberg sing backup with Ian McLagan – and joined by interloper Pete Townshend. Townshend was the undisputed big draw of the night, and he arrived in true rock-star fashion, with his BMW limo driving through a gate directly into the Convention Center itself, as he made his entrance surrounded by paparazzi and body guards. Barbara Kooyman's set with Carrie Rodriguez and Michelle Shocked was enchanting, and the Clifford Antone tribute was wonderful and moving. In addition, I hobnobbed with Will Wynn, Ray Benson, Michelle Valles, Jonathan Demme, Trish Murphy, and seemingly thousands of others. Happy anniversary, AMA! 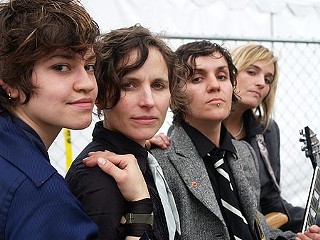 The Cliks, fronted by Lucas Silveira (second from right), are hardly your typical "all-girl" band.
CLIK CHAT They rock like the boys do, never mind that Google describes the Cliks (www.thecliks.com) as a "Toronto-based all-girl band with an androgynous image." That's like saying that the Taj Mahal is a nice house, if a bit formal. Technically accurate, yes, but missing the point entirely. I will admit that when I watched a grainy video on YouTube.com, I did think the Cliks looked like a group of neo-punk guys, but I had previous info that lead singer/guitarist Lucas Silveira was a female-to-male transsexual, so my interest was piqued. I watched closely, but really, it's a superfluous detail – after the novelty wears off, it's the music that matters. And I really liked their music. Their tough-as-nails sound has its own kind of tenderness, and repeated listenings have made me love several of their songs, notably "Oh Yeah." Silveira has a great rock & roll voice and stage presence, and the band itself is watchable – and their music is great. Their album, Snakehouse, comes out Tuesday, April 24. See the Cliks at 10:30pm, Saturday, March 17, at Momo's – part of the NXNE Showcase.