The sisters are doin' it for ... everyone 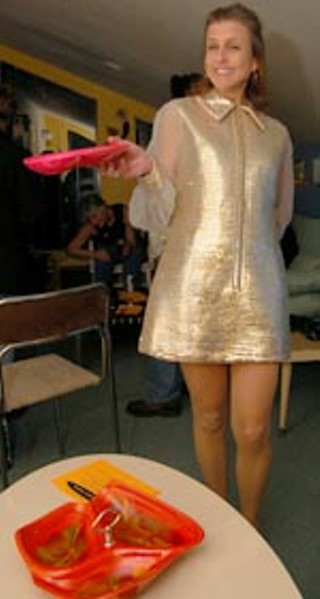 When Kitty walks into a gay bar, people know who she is. They might not know that her real name is Dianne Murray, that she is an elementary school teacher, that she hails from Alabama, or that she used to be in a band. No. But they know her. Whispers follow her. "That's Kitty from Foodies. That's her!" Dykes and lezzies of all persuasions point and compare notes; even some gay men take notice. This was not the case 18 months ago, before Kitty became one of the godmothers of Austin's lesbian community, before she made a viable scene out of a handful of nothing.

You see, when Kitty returned to Austin after a seven-year absence, she was lonely. She wanted to meet people. Her return to Austin left her perplexed. "Where is the scene?" she asked. It was such a buzz kill from her days in San Francisco and New York, where she rubbed shoulders with such indie film and theatre heavy hitters as cinema gurus John Sloss and Christine Vachon and Greater Tuna maven Ed Howard. Queer Austin suddenly seemed stagnant compared to her own wild times here in the Nineties. What she found when she moved back was the usual humdrum of the gay bar: the cruising, the boozing, the games we play. And it just wasn't her cup of tea.

Lesbians don't find the same connective unity that so many gay men enjoy in the bars. Here in Austin, male bars flourish, while women's establishments fall by the wayside. Lesbian bars certainly don't begin with the same sort of capital that fag bars do, and as it turns out, they generally don't generate it, either. "Dykes are cheap," Kitty jokes. But ... there's some truth to this. So until someone figures out the formula for a successful Austin lezzie venue, what's a girl to do?

"What is the common denominator?" Kitty asked herself. "What will bring the ladies out?" The answer was clear: "Duh. Food. Everyone will go for that." A friend suggested the name "The Eat Out Club," but our Southern belle from Alabama thought it too tasteless.

So, in fall 2004 she started Foodies. "Foodies: For women who love women who love food." Earlier that summer, on Austin's Women Seek Women personals section of Craigslist online, the same crew of women began posting each week, bored with the offerings around town, clamoring for community; Kitty posted an invitation: Let's all meet! And they did. What began with 13 women sipping bevvies at Spider House has mushroomed into a movement of sorts, a force to be reckoned with, the type of posse that now drops hundreds of lesbians – thick crowds a-buzz with friendly chatter – on restaurants all over town. Camaraderie. Connections. Community.

Those first coffeehouse dates alternated each week with dinners at restaurants like Taj Palace, Moonshine, 219 West, Clay Pit, Frank & Angie's, the Hoffbrau, and Casa de Luz. After a year of Foodies, the average numbers became so reliably large that Kitty had to arrange in advance with restaurants so as not to overwhelm the staff (or have the unthinkable happen: a bar stocked with no Coors Light). That initial handful of homos has grown to a membership list of more than 1,500 women. That's a lot of lesbians.

Foodies began and continues to be entirely do-it-yourself, says Kitty, the woman who wrangles the lists, coordinates the venues, dreams up the themes, and cheerleads the gang – all on her own time and with no regular arrangement to cover her efforts financially.

"I went back to my roots as a musician and performer," Kitty recalls of those early Foodie labors of love. "If you want people to see your stuff, you've got to get it out to the public. So, I've made it a campaign, writing blips every week online, making them cute or sexy or whatever just to keep interest and get the word out." Foodies continues to grow. A year and a half into it, and women are asking each other out on dates, teaming up golf partners, inspiring art collaborations, recruiting softball players, and raising money for good causes. And it all began with one lonely Kitty.

"There are a lot of lonely people out there," says Kitty. "That's a bum-out: People can be so afraid of being social. They need encouragement. They need to feel comfortable. We're all in this together. And what we are getting out of it is an actual community."

The idea is so simple. Can't relate to what the gay scene offers? Make one of your own! 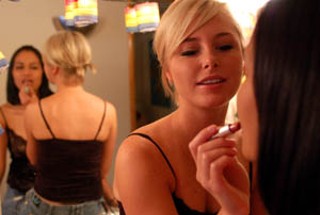 For Kai Matthews and Silky Shoemaker, that's exactly what they did. The two artsy kids wanted to do weird, queer performance art but had no place to do it. Thus CampCamp! was born in summer 2005. It began and remains open to everyone: all ages, all-inclusive, free, relaxed, supportive. They gather the first Thursday each month on the moonlit stage behind Bouldin Creek Coffeehouse: performers, dancers, first-timers, singers, poets, the well-trained, the weird, the timid, the curious, even those making it up as they go. No judgment. No rules.

"It's not for haters," says the duo. "Fun is important, and being social is a form of community-building. CampCamp! has a specific focus on performance, but we realize that a lot of people come for the social aspects. It's a night of socializing around a lot of creativity and queer brilliance."

And these camp counselors put so much of themselves into the process. The stage shimmers with DIY – bedsheet curtains, hand-painted signs, and decor pooled from their very own homes. They personally emcee the absurdist follies. They flier and put the word on the street. They invent silly themes (Underwater Prom!) and games to play with the audience between acts. Hugo Ball meets Spanky McFarland. There has been a packed house since the very first show.

"Queers and performance go hand in hand," says the duo. "Queers are performing all the time, in everyday life and otherwise, and we wanted to participate in a tradition of camp and gay theatrical bonding."

The range of art has been impressive. Everything from dry-docked water ballet to multi-instrumentalists to fire dancers, inspiring themselves and others. "You don't need experience to do this," they encourage. "Everyone has a valid claim to the stage. We wanted to give it a spotlight. And having a regular time and place is important, because a person might show up and not perform but come again a few times and eventually get up on stage. So it feels like a community. You know, family."

For the newest girls on the DIY block, the Lipstick Lesbians, it's all about the feminine. One idea and three friends of varying degrees of femme. Clare Vaughan, Rashmi Garg, and Keli Cochran wanted to bond with a crew of ladies who liked ladies, a lair of ladies who weren't afraid to get their nails done. Voilã! "We're into, you know, all the girly stuff," says Vaughan, "Like shopping. All the shit that straight girls do ... but we're lesbians."

The Lipstick Lesbians were off and primping. The group began in February 2006 as a once-a-week meeting between a few ponytails. Today, there are about 40 women: some young, some older, some femme, some girlfriends of the femmes, and admirers of femmes just trying to get a date. "Now we meet more frequently," says Vaughan. "These ladies look forward to coming together to hang out. That's all we wanted – a support network for women like us."

There is no dress code for these girly-girls. Heels optional. In fact, the majority of the meetings haven't been stereotypical feminine activities: Wiffle-ball tournaments, lake trips, and kayaking are among the chosen ventures. Is this an attempt to subvert the image of the feminine lesbian? "Uh. I guess so," says Vaughan. "We just want to have fun."

How fitting. It all boils down to what the word "gay" originally evoked: fun.

Ripping a page from the DIY manual is not exclusive to the women, either. Even the gay boys who feel lost in the traditional scene have carved their own niches. Some adventurous ones have started booking live rock & roll at the Chain Drive leather bar, bringing in a variety of acts to one of Austin's most elusive venues, blending the very naturally complementary gay and music scenes. Then there's the gang behind the very independent gay skate night, still providing a four-wheeled alternative to the bar scene, because that's how they roll. And there's even a dandy named Assacre who massacres one-man performance art to the delight of a loyal throng of fans.

For the guys, this DIY aesthetic provides a true alternative to the stale mainstream, a change from the everyday, consumer-driven bar rut. For the women, however, the "alternative" is proving to be the very lifeblood of a new, vibrant Austin lesbian culture.

And, sister, they are doing it themselves.

Chronicle's weekly listings column, The Gay Place, a great place to find weekly updates on these and other queer happenings around Austin.