After a Fashion: Saturday 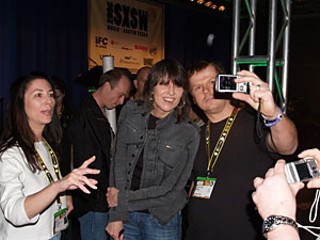 Chrissie Hynde greets fans and photographers after her interview where she minced no words ("You don't have to take an intelligence test to become a celebrity") and answered questions about the history of the Pretenders. (Photo By Seabrook Jones)

SXSW-ing Bigger and better than ever; more to see, more to do. We lounged away the evening listening to BMI's singer-songwriter showcase at Opal Divine's on West Sixth featuring Inward Eye, Sons of William, and particularly We Are the Fury for their smart sound and slim jacket/skinny tie Eighties sensibilty with a dash of Seventies Bowie – a look not so uncommon this year. Captain had beautiful OMD-ish vocals and that irresistible UK New Wave sound that I still love from my misspent decade of decadence, and Nico Vega's searing vocals and guitars kept me rapt. Through Sunday, BMI turns the airport into a premier SXSW venue by showcasing Texas greats such as Ruthie Foster, Carolyn Wonderland, Big Blue Hearts, and Redd Volkaert & Cindy Cashdollar at the airport's Highland Lakes Bar stage. 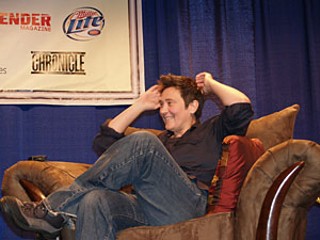 k.d. "Jake" lang stretching the boundaries during her public visit to Austin – she's here often, but we just don't see her. (Photo By Seabrook Jones)

BITCHEEEEE Backstage at the Morrissey/Goldfrapp show, the Morrissey camp was so difficult to work with that Ray Davies didn't even make it through sound check. He packed up his toys and went home, literally. I guess Davies thought that Morrissey should have had more respect for his elders.

NOTATIONS The Napster Lounge at the Levi's Trading Post had the wildest toys – including this thing that was like a green scrotum with waaay too many testicles in it: squeeze hard and they turn colors, just like in real life(!)… ME Television has had great parties at their studio for both film and music with intimate showcases and other entertainments like video postcards and the Wire Image booth that will take your picture and post it online. Later, I met up with Molly Kemp, Vance Knowles, and Charles Attal, for Charles' private party (thank you, Charles!). The main party was just beginning, and the energy was palpable as that enormous room revved up into a fabulous frenzy. But we'd been separated from Charles and Molly and wound up in security hell trying to find them. We ran into Matt Luckey who told me about the upcoming renovation of Oslo and the new restaurant next door, the Belmont, that he's working on with Daryl Kunik; and chatted up arts and style icon Anne Elizabeth Wynn, who looked predictably gorgeous in an embroidered, spangled halter. Then, I went over to Emily Fawcett to say hi and get a quote for my column. "I'm working!" she snapped and turned her back on me. Note to Emily: We're all working, dear, it's SXgoddamSW. Everyone's working. And on that note, we left. Note to self: Dealing with Emily is always such a chore.

TOMORROW So many choices, so little time: From 3-9pm is the RagiWorld Party at Big Red Sun (1102 E. Cesar Chavez) featuring the Resentments, among others, and hostess with the mostess, Mme. Pamela Des Barres. No cover (Mme. Des Barres is also presenting her Creative Writing Seminar at Pink Salon on Mon-Tue, March 20-21. Go to www.pameladesbarres.com for complete details)… Jovita's (1619 S. First) presents Twangfest, the KDHX-FM & Undertow Records Party, noon-6pm… The Western Australia Music party Down by Down Under is at Positively E. 4th Street (1300 E. Fourth), 2-6pm. See the flyer at spinningworld.net… At 4pm is BMI's California Brunch at Caribbean Lights (612 E. Sixth) featuring the Like, the 88, Augustana, the Willowz, and Foreign Islands…