Off the Radar, On the Gaydar Shows

Dreadfully Sorry, Zoe Lewis, the Gossip, and the Eagles of Death Metal 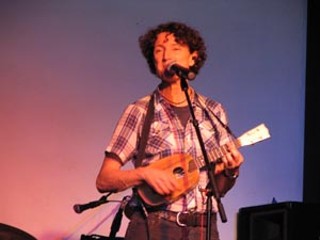 The Dreadful Sorry at the Chain Drive

Mollie Fischer makes her cello sound like an animal groaning, a woman coming, and a waterfall thundering from the center of a cave – all at one time. This cello, combined with Terri Lord's hypnotic voice and jagged guitar, and Dwight Dugan's energetic drum set, makes up a fabulous new Austin original: The Dreadful Sorry. The Chain Drive was filled with dykes, trannies, and punk music aficionados on Thursday night to see the trio take the stage. Their hourlong set shook the walls, ranging from slow ballads to headbanging classics. Each of these musicians is accomplished and seems to merge with their instrument onstage. The Dreadful Sorry is a transfixing, exciting experience – kind of like watching a punk Picasso paint with sound. – Abe Louise Young

Tremendously impish British sprite Zoe Lewis graced the stage at Maggie Mae's with her ukulele, harmonica, guitar, keyboards, and squeaky toy that sounds like a lamb's baaa. She thrilled a packed house in the middle of the day on Friday, giving an energetic performance of true musical eclecticism on Friday. Lewis was onstage as part of the Judy Collins Tribute held by Wildflower Records, which 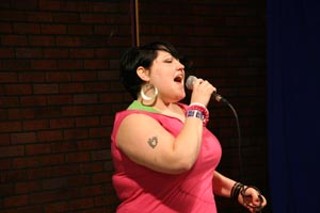 The Gossip's Beth Ditto belts it out at KVRX
put out her new album, Small Is Tremendous. Her fast-paced lyrics poke fun at modern society and praise the rambling delights of childhood, secret worlds, and wandering love. Bright-eyed, tousle-headed, and dressed like a chap from the Twenties about to hop a train, Zoe Lewis proves her own point: Small is indeed tremendous. – Abe Louise Young

Amidst the anarchy that is South by Southwest, KVRX 91.7FM hosts something a little different and a little less chaotic for bands and fans. Since 1997, the student radio station at the University of Texas has presented 3x5, a live performance series that traditionally features three bands a day for five days. The 3x5 recordings are open to KVRX Deejays and volunteers, so the bands play to about a dozen, as opposed to the hundreds they play for at their showcases. The Gossip came into the station on Thurdsay to record their set. "It's kind of like a show, but it's not really a show," singer Beth Ditto said. "It's like playing a birthday party," guitarist Nathan Howdeshell said. At first, the group got lost trying to find the station's digs in the UT Communication building. Ditto came up first, wearing black leggings and a short pink dress. She wore large silver hoop earrings and chunky pink and white plastic bracelets that covered her SXSW wristband. After the set-up and sound check, the Gossip launched into a five-song set of selections from their new album, which opened with "Jealous Girls" and the titular track, "Standing in the Way of Control." Both songs fell into the standard Gossip sound: bluesy punk with jerky rhythms and a dance beat. Recent addition, drummer Hannah Blilie wore a sleeveless black T-shirt to show off her many colorful tattoos. While Ditto's amazing vocals and Howdeshell's erratic guitar take the forefront, Blilie's dense drums and nonstop high-hat give the Gossip a much fuller sound. They continued with the soulful "Coal to Diamonds," where Blilie and Howdeshell pull back, showcasing Ditto's amazing range – gritty-scratchy one minute, calm and nurturing the next. Ditto, the only band member with a microphone, joked between each song, informing the small crowd that the Domino's Pizza she ate last night was not sitting well, referring to Production Director Andrew Hernandez as "Andrea," and continuously comparing the performance to playing at a birthday party. "It's like Wayne's World meets UHF meets Leona's 12th birthday party," she said as Howdeshell put down his Gibson and strapped on his beat-up, electrical-tape-covered, missing-its-G-string, yellow Fender bass for "Listen Up!" They finished with "Keeping You Alive," and Ditto and Howdeshell stepped into the deejay booth for just a moment to announce their shows while Blilie packed everything up. The Gossip then bid farewell to KVRX, leaving the laid-back atmosphere at the radio station and heading back out into the mayhem of SXSW. – Lucas Del Pico 3x5 airs on KVRX 91.7FM Thursday and Friday at 7pm, Saturday at 10pm, and Sunday at 11pm. The Gossip will perform Saturday at Emo's IV at 3:30 p.m. Lucas Del Pico hosts Cheesecake in the Forbidden Zone airing Tuesdays 9-11pm on KVRX 91.7FM. – Lucas Del Pico

I rely on my kids to keep it real for me. Fresh. So when the mighty triumvirate of one of my beloved media students Justin, my beloved Chronicle intern Frank, and my own beloved kid all separately raved about the Eagles of Death Metal, I had to prick up my ears, as it were. I had always assumed them to just be a joke band or Queens of the Stone Age side project and am always suspect of bands best known for songs on video game soundtracks (hence the teen-boy recos, I guess). I'd recently seen them on MySpace and dug the 'stache. If you know me, you know my love for the facial hair, and EofDM ain't lackin' in that department. So against my better inner-mommy, aging hipster judgment, I made the call to go ahead and stay out for a 1am showcase and caught the Eagles at Exodus. The place was fire-marshall packed, but I had faith because the crew outside was working overtime with those little hand clickers. They even had a separate exit door. Phew! I could not believe my great fortune when I managed to wedge my largess into a pretty choice crack with a great view (I also have fantastic parking karma). The crowd went nuts when the Eagles hit the stage. I could not believe my further great fortune to see, three bodies to my left, the impish, dapper cut of my bud, Frank the intern, so ready to rock. Frank loves the Eagles and especially the Homme and kept making growling and meowing noises at him. I want to get him a date with him. I'm not sure which one is Homme, but as Frank reminded, that's French for man, and all the Eagles are all man, except for the drummer, Samantha Maloney (Hole, Mötley Crüe), who we'll say is maybe 20% man for all those drummer snob boys out there. (She kicked, by the way, you snob boys.) It was tough to not be mesmerized by lead guy Jesse Hughes' chisled jaw, nice guns, and push-broom mustache. To me, he looks like the love child of Keifer Sutherland and Tom of Findland. It was distracting: I kept thinking to myself, "Damn I bet he has a nice butt," and so wanted to bond with Frank over this, but did not want to make Frank squirm. The other guitarist looks like a young ten-gallon Don Walser or cowboy Drew Carey, post bariatric, and the bass player who looked like Tito and Tarantula smushed into one dude. Apparently, there were dual drummers, but I could only see sexy, spikey blonde Samantha, who sitting right behind Jesse "the nice butt" Hughes probably had the best seat in the house. I guess that means the other drummer was that famous guy. I was also distracted by this very lean, lanky, Julian Casablancas-esque hairdo princess who was backed up against the wall by his writhing beard of a blonde bombshell girlfriend, yet still managed to flip his hair every few with his little wrist. Girlfriend was all over him. Who was he kidding? The entire time the poor gorgeous girl was attempting to grind him into oblivion, he loped his chin over her shoulder with eyes absolutely fixed on Jesse. Who I think should be renamed: EZ Top, because that is what he looks like and that's sort of what they sound like: Prancing boogie metal. For how testosteral the crowd was, in the interest of truth, justice, and full disclosure, I propose that next gig, the band sport "Nobody Knows I'm a Lesbian" T-shirts. – Kate X Messer