The Moaners incite small, sweet noises from the back of the throat 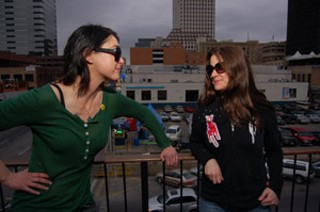 At first glace, they register as shy and retiring. Shy glances, nervous stances – not what you'd expect from two wild rock mamas livin' the dream of life out on the road. Melissa Swingle could've been that English Lit teacher you had a schoolgirl crush on back in high school, soft-spoken, but utterly passionate about what she knows and loves yet completely open to what she doesn't ... so much going on behind those clear, blue eyes. Laura King could've been that super-sweet assistant teacher or basketball coach you told your silliest secrets to, or your darkest, all willowy and grinning, her strong, easygoing nature a comfort. But then it's easy to conjure elaborate stories about the Moaners, they're steeped in the South. The duo released their dusky Southern debut Dark Snack (Yep Roc) (Record Review), a tight and murky blast of hair-wagging blues-trash, a bit of a leap from Melissa's previous acoustic outing. "I'm playing from my heart: More rock & roll songs to drive around and bang your head to, as opposed to Trailer Bride where a lot of the songs were sad and sort of melancholy." It's hard to imagine anything lilting or whispery coming out of her once she straps on that SG. On tour through Atlanta, Birmingham, Macon, Jackson, the Moaners rattled into Austin for SXSW 06 in a Chevy van dusted with pistachio shells and dashboard bumper stickers from places like South of the Border and Loretta Lynn's Kitchen. On the roof is a painted shrine to the Virgin de Guadalupe. "It's a lot of work, " says Melissa of highway life, "but worth it." The two still have their "crappy part-time jobs," but even when they're not on the road, they're working on songs. Sounds like a lot of Austin's struggling musicians. Unlike their Austin counterparts, however, the Moaners don't play out a lot locally, due to the small, tight-knit circuit of very few clubs and very many bands in their home in Chapel Hill, N.C. "Everybody knows everybody, There's one street," says Laura. Melissa and Laura met when their previous bands Trailer Bride and Grand National played a festival together. Melissa saw Laura pounding away on the drums, stood at the side of the stage and thought, "Wow, she's awesome," she remembers, "We met that night and exchanged numbers. It took several months for me to call. Then we went out and got a drink and went back to my house and jammed ... and that's all she wrote, after that because we were up to like four in the morning playing music and having a great time." Pretty much, they haven't stopped since. They expect to record some new stuff this summer, some of which got aired at their two shows during SXSW (day party at the Tap Room and their showcase at the Continental), especially this one particularly naughty little French number says Melissa, who used to live in French-speaking West Africa, "You can say really sexually dirty things in French and make them rhyme and sound so poetic. But when you translate it literally into English it's like ... oh my gosh!" For a special, private preview, Melissa begins to pour the number out in her smoky, honey-coated alto. Honey, I don't care if that is French, I think to myself, that still sounds dirty ... Until that naughty bit gets set in the studio, the gals will be out having the times of their lives, just the two of them, blasting out on the road. Every trip they take archives more tall tales of drive-thru daiquiris, the exact interstate exit of a great Mexican restaurant in some off-road outpost, and that road-worthy chestnut of creepy biker guys. "When we feel threatened," Melissa says of their life tearing up the Chevy, connecting through music, two women alone on the road, "We walk as butch as we can. You know what I'm sayin'? Put my arms up and ..."