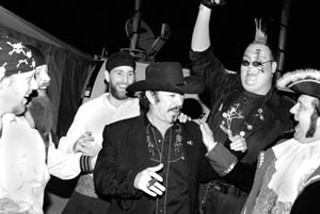 Our next governor, Kinky Friedman, and the Jolly Garogers in the Winners' Tent at the Austin Music Awards (Photo By bobshermanart.com)

AMA MOMENTS Was it a masquerade ball? Or was it the Austin Music Awards? Who cares? It was faaabulous. The AMAs win my award for Most Improved Event in the Style category – even if many appeared to be in costumes (didn't we all?). From VIP gatekeeper Darcie Fromholz's sizzling pin-up outfit; to the Jolly Garogers in full regalia; to Jon Dee Graham's 6-year-old son Willie, who stole the crowd's heart in his cowboy outfit (he won my award for best-dressed), the awards were among the best ever. Great moments included Casey Monahan presenting a proclamation to Paul Ray from the Governor's Office, and Clifford Antone presenting him the Emcee Emeritus Award during the loving tribute to Ray, who was ending his 24-year stint as AMA emcee; Miss Lavelle White's acceptance speech ("When I kiss this award, I'm kissing you."); Eliza Gilkyson's acceptance speech for Female Vocalist of the Year and Best Folk Band; and, of course, the sight of Beatle Bob dancing to the Guitars-A-Go-Go set. Never let it be said that Kris Kristofferson cannot read a script; he memorized line-for-line the words Margaret had written him for the awards set before his performance, when Kinky Friedman inducted Kris into the Hall of Fame. Standing outside, something small ran across the toe of my boot – was it another Elijah Wood sighting? 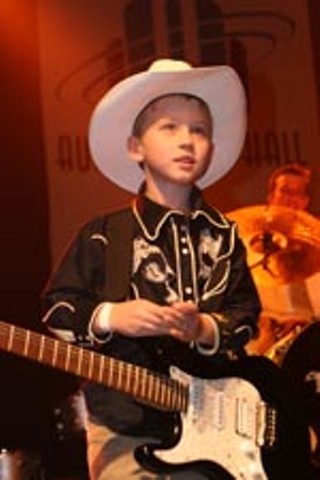 The show-stealing 6-year-old Willie Graham snagged the Austin Music Award for Most Charming Performer and Best Dressed – categories I just made up in his honor. (Photo By Todd V. Wolfson)

OTHER MOMENTS Spotting Lyle Lovett at KUT's studio for the Texas Music Matters show with David Brown, where he expressed much gratitude for TFHOF; Morrissey, who said his favorite American group was the New York Dolls and that Joy Division is boring (and no one would listen to them when they were around).

OMG Those official SXSW lanyards again – black and white and yellow. The only way I can possibly make that work is if I dress like a bumblebee.

MY MOMENTS Lounging at BMI's Howdy, Texas! Dinner at the Levi's Trading Post on Sixth Street – this little party was hardly little, and was quite the industry schmooze-a-rama, with an energetic crowd entertained by Chris Stills (son of Steven Stills), Curt Kirkwood of the Meat Puppets, and Christina Bell. We met the fab J.D. Natasha, who performed last night at Maggie Mae's. BMI is an original sponsor of the SXSW Music Conference, and brings some of the best talent to SXSW. Their rock-solid showcases rule, and further events are listed at www.bmi.com/news/200602/20060221b.asp. The SXSW fixture Pamela Des Barres made it into town again, with legions of fans genuflecting at her feet everywhere she goes. See her as she emcees the RajiWorld party at Big Red Sun on Saturday, 3-9pm (all ages, no cover).

After a Fashion: Thursday
Gossip