After a Fashion: Thursday

Local photographer/filmmaker Andrew Shapter (right) and the always elegant Erykah Badu at the afterparty for Before the Music Dies (Photo By Todd V. Wolfson)

Producer Charlize Theron (center), who said of her film East of Havana, "It's about penguins …," arrived in Austin with an entourage of 24 (!). Eat your heart out, HBO. (Photo By Seabrook Jones and juicythis.com)

ANNUAL MIGRATION As early as Tuesday and certainly all day Wednesday, you could see it. As the "comfortably attired" techies and gray clad film jocks packed up to go back to whatever rock they dress under, the plumes unfurled. From the gates at Austin Bergstrom to the streets of the Warehouse District, the peacocks of the SXSW Music conference have arrived! New coifs, tight pants, shiny boots ... for five days, Austin dictates the fashion edge. But is that such a good thing? Like those armies of girls with two-toned skunk hairdos and every inch of skin covered in tattoos. A little of that goes a long way. And it's not so much that we've all been there and done that (we have), but now that look is so all over the place that you can't tell Red River from Hot Topic. I blame the Rollergirls. While I appreciate strong women with a sense of style, the look is getting a bit cliché, ladies, don't you think?

FRODO LIVES The elfin, faux-hawked Elijah Wood has been dragging his skinny tail around town; he's a SXSW repeat offender. Gail Chovan and Evan Voyles sat at the table next to him at Hut's ("Why, he's no bigger than my newborn," said Chovan), and he was spotted at Güero's, too. You'd think that with such regular feedings, li'l Frodo would grow a little bit. Chovan later admitted that he looked "maybe 14." The LOTR tin hats are on the loose, standing absolutely transfixed when they see him on the street and following him in packs.

SIGHTINGS In town for the rodeo, Ashlee Simpson shopped at Blackmail on South Congress, buying up little moleskin notebooks – presumably to write down little thoughts as they occur to her ("Dear Diary, Today I thought about something. Love, Ashleeee.") Last time she was here, she bought cowboy boots at Blackmail; they would have been lovely for her to wear when she did her chicken-fried jig during her embarrassing Saturday Night Live mishap… It seemed like all the TV news mavens were out in force for Ray Benson's birthday party at La Zona Rosa on Tuesday night – RJ DeSilva, Judy Maggio, Michelle Valles, Jenny Hoff, and Jim Swift to name a few. Swift's wife, the brilliant artist Katy Nail (www.katynailart.com/gallery/main.php) was also there and told me about her daughter's, the divine Carrie Rodriguez's new solo album. Yea, Carrie! (Was that really R.E.M.'s Michael Stipe we saw there?)... It seems I can hardly go anywhere without running into Bud and Robin Shivers these days at Antone's, La Zona Rosa, and Milkshake Media's faaabulous party at Lucky Lounge. Bud, son of former Gov. Allan Shivers, is a good ol' Texas boy who fights the good fight, and Robin is a real charmer… Ran into wrangler of the stars Werner Campbell on the street the other night, squiring around actress and filmmaker Annabelle Gurwitch, who produced and directed the riveting documentary Fired!, loaded with dismissal stories from such greats as Tim Allen, Illeana Douglas, Anne Meara, and Harry Shearer. See the final screening at 9pm, Sat. March 18. 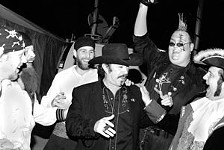 After a Fashion: Friday
Gossip