Hijacking the third wave: the H2Hos take their renegade feminism to Austin's pools and beyond 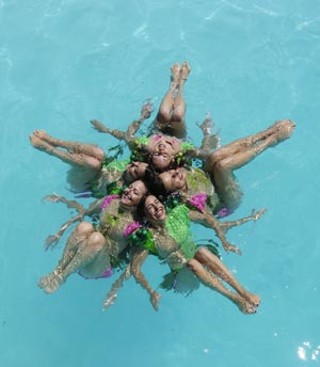 Much like swimwear, synchronized swimmers seem to come in two sizes only: kiddie size (found at your local Y) and Olympic size (seen once every four years). Of course, there are the vintage collectibles: dinosaur size, the extinct MGM aquacade ladies once found in groups of 70 or more and usually seen from the bird's-eye view. You can still rent Busby Berkeley films that popularized their performances throughout the Forties, starring Esther Williams in dazzling escapades paired with ever more ridiculous circumstances. (Elaborate water spectacle plus Esther Williams equals ... bullfighting in Mexico!) But no one actually does. Which brings us to the hot Austin summer of 2001.

"Kasaia called up a bunch of people she knew and was like, 'Hey, we're having tryouts for this thing,'" recalls H2Ho costume designer Rachael Shannon. "No one really knew what the hell she was talking about." Kasaia Luckel and Julie Burgardt had been watching the old Forties films, inspiring Burgardt to teach Luckel some synchronized-swimming moves she'd learned as a kid at camp. Then they lured friends to Barton Springs for impromptu lessons, or "tryouts."

Just a month and a half later, five fancifully clad women hijacked the Wind Ridge Apartments pool near Barton Hills, and 150 people showed up to watch – some friends of swimmers, some kids and their parents from the neighborhood, some curious joggers and various passersby. With the accompanying music of the newly formed Wishing Well band, the five pranced around the pool, dove sideways into the water, and then somersaulted, log-rolled, and ballet-kicked until a canoe paddled up. In the canoe sat a fisherman with a giant hook. He snared one of the swimmers, dragged her into the boat, and filleted her with a Party Pig hatchet. The remaining four swimmers, weeping at their loss, swam mournfully as the canoe was surreptitiously pulled from the pool. But soon someone appeared atop the pool's waterfall – with wings no less. Their fallen pal had been resurrected; she splashed, twirled, then jumped from the waterfall to reunite with her friends. And as we'd all do if such a thing happened to us, they lit some sparklers and formed a pyramid.

That first show fell on the last day of summer, just 10 days after the September 11 attacks, and by the end, as the sun went down bathing the crowd in a surreal, MGM-worthy golden light, emotions were high. Onlookers cheered, laughed, and cried, and the H2Hos were born.

Inevitably, 9/11 had turned an end-of-the-summer hurrah into something much different. For the performers, in a way, it ensured they'd actually go through with their scheme. "It really fueled a lot of the show – just having something to do with our energy and to feel connected," says Shannon. Wishing Well's Michelle Marchesseault remembers thinking, "What else can you do but make something that's just totally off the subject?" Ripple Effect: Originally just five friends, the H2Hos have grown in three short years to include more than 20 people who create the fantastical music, sets, and costumes that have become the 'Hos & co. trademark. (Photo By John Anderson)

As far from the subject as synchronized swimming might seem, it proved a natural outlet for the 'Hos, all of whom had some background in either swim or dance. In the weeks leading up to the show, the five swimmers prepared: Luckel, Burgardt, Krista DelGallo, Maggie McGiffert, and Anne Glickman (who'd just met DelGallo at a party and happened to mention her childhood "obsession with synchronized swimming"). Later they would scour eBay for old books with instructional stick figures doing moves like the "Mexican catalina," but for the first show they invented their own moves and polished those that Burgardt and Glickman remembered. Luckel continued to bait and hook. Marchesseault, having refused to go to anything called a "tryout," was lured in nonetheless. "Wouldn't it be cool if we had live music?" Luckel asked. "You could do that." And then there was Shannon, frustrated swimsuit consumer turned liberated designer, a shoo-in as the H2Hos costume creator. The band was further fleshed out, and other friends took on roles like canoe duty.

Marchesseault compares it to the Little Rascals, with their giant quilt curtains and elaborate sets and pit orchestras, all "supposedly in someone's back yard. ... And you're like, 'Oh my God, I would totally love to do that with all my friends.'" Synchronized swimming seems particularly suited to a childlike sense of fun. Erin Kelly, the group's most recent addition, a triathlon swimmer turned 'Ho, says she'd "never before done any synchronized swimming," but she's quick with an amendment: "I mean, when I was a child we would make up routines in the pool and make my parents watch."

But the 'Hos are no longer kids. While they create their shows distinctly to "make people feel good," these self-declared "renegade feminists" each work from a specific political perspective. Glickman sees in the 'Hos a chance to counter lingering stereotypes of the moralizing, man-hating feminist. McGiffert views the group as an extension of the anti-war group Bands Not Bombs, while DelGallo emphasizes the swimmers' commitment to performance that's out of the ordinary and accessible (all-age-friendly, inexpensive, and not elitist).

Intentionally or not, having branded themselves feminists, the H2Hos have broken from today's third wavers (as in: first wave got the vote, second wave burned the bra), generally characterized as the generation that doesn't use the word "feminist." Here they are, the H2Hos, both "feminist" and "third wave," not man-hating or didactic but exuberant and inspiring, riding a bike into a pool, blowing fire from their mouths, and serving Tecates and fish sticks at poolside.

What began as a Little Rascals caper among a handful of friends has today grown into a sprawling venture involving 20-plus people. Some now live on the West Coast, collaborating via phone and e-mail, arriving in Austin a few weeks before shows to practice with the group. Wishing Well has added an amorphous number of musicians who fill out the sound with horns, lap steel, accordion, and whatever else seems appropriate. Recent fashion design school graduatue Molly Gove creates outfits for the band, and Shannon's swimwear becomes more complex with each show, involving fins or giant lily pad hats or leaves flowing from swimmers' bodies. There's even a set-design team, who built a poolside costume-change room and floating iceberg throne for last fall's show. Glickman confesses it can be "an organizational nightmare," especially given that they often don't have their own place to swim, and the city doesn't allow organized groups to practice in public pools.

For the last two seasons, the 'Hos rented the Elks Lodge pool, and sliding-scale admission fees from the audience (further tempered by the assurance on their Web site that "No one will be turned away if they cannot afford to pay") actually recouped their out-of-pocket expenses, leaving them money to make subsequent shows bigger and better. There's no telling what they'll come up with for this summer – while the second season involved fire breathing and Rollergirls skating into the pool, the third-season performance was abstract, serene, and utterly absorbing.

On a cool weekend this spring, the swimmers stood beside a pool, wearing button-down sweaters over their suits and towels tied around their waists. Women & Their Work had recruited them to perform at their April fundraiser, and the troupe was practicing at the venue – a mansion in West Lake Hills with an "invisible-edge" pool that cascades over the side into the hills below. As they debated their moves and their costumes (goggles, no goggles, goggles ... "We're not trying to be pretty, here") against a backdrop of verdant green and the downtown skyline, it was clear that whatever they come up with, you won't find anything like it at the Games this summer.

The H2Hos will be performing this summer, early August, at a yet-to-be-disclosed location and time. For more information, visit the H2Hos Web site at www.h2hos.com.