Not Your Daddy's Facial Hair

Austin's drag king sister misters are doin' it for themselves 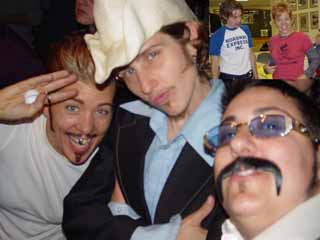 Despite my delectable rack of double-Ds, a sultry voice, and fey demeanor, I get called "sir" quite often. While this offhand gender blur can be unnerving, most often my retort is a sweetly delivered, "Thank you, ma'am" to the barely shaving Eminem-wannabe slouched behind the Target register.

Sometimes, I wonder: Why fight it? Why not just give in and live the part? Well, it's not as simple as that. It's easy to assume that women who display or even go so far as to don male characteristics actually want to be men or that they hate their own bodies or their own gender – that whole "penis envy" thing, you know …

Personally, when I don male gear, or "drag," it isn't so much a "coming out" as it is a "dipping in." And when I'm finished with the spirit gum, the latex, and the rib-cage binder, I can rip off that mustache, pack away that package, unleash my boobs, and be done with it … until the next time. For me, drag is like that sweet relative who enjoys kids – as long as they're someone else's; at the end of a long day of babysitting, the babies go right back to their rightful places (just like my boobies, see?).

Now, that's just how I feel … this week. Mileages do vary. Some drag-delvers are in for the long haul, trying on a transgender future to see how it fits. Some are searching to resolve issues about feeling "in between." Some are men experiencing for the first time an approximation of what it's like to be perceived as female, or women breaking out of shells, or artists questioning societal and political boundaries. Some just like the way that thing hangs down there – or doesn't.

These days, seems like you can't swing a proverbial pussy in this town without hitting a bearded lady. Surprised? Well, sure. This is Texas, after all, not San Fran Frisky. But then again, this is Austin. Freak Central. Our town's poster boy is Leslie, a long-haired, bearded, homeless fella who pushes a cart while prancing about in a cute, form-fitting li'l Longhorn cheerleader's getup. Bearded ladies've got nothin' on us. Between Leslie and Austin's new crop of female-to-male (FTM) impersonators, or "drag kings," facial hair does seem to be on the upswing. And in the case of Kings 'n' Things, Austin's newest troupe to tromp on gender conventions for their art, nightclubs ain't the only thing they're packing.

Kings 'n' Things began to form in the minds and jockstraps of local filmmakers K. Bradford and Mocha Jean Herrup late summer, 2001. Both women shared an obsession with certain male celebrities. But unlike most females under similar spells of stardust lust, neither necessarily wanted to fuck their particular objet d'luv, each just wanted to be him. Bradford's obsession with John Travolta – and specifically the characters he portrayed in Grease, Urban Cowboy, and Saturday Night Fever – is documented in an essay, about her character Johnny T., to appear in an upcoming compendium, The Drag King Anthology, while Herrup's curious fascination with boy-band icon Lance Bass is the subject an upcoming film, as well.

Now, with a year's worth of auditions, practices, and packed-house performances under their big-buckled belts (gig numero uno as the "A-Town Boys" was at last year's Austin Chronicle Drag Ball), Kings 'n' Things boasts a roving roster of over a dozen kings, an emeritus king in both Chicago and New York, and even a queen.

"For myself or queer people or whatever, we don't get to practice certain things when we're young," says Herrup. "We're so freaked out in our teen years that we miss the opportunity to experiment with who we are because we are too busy hiding it. Especially [when performing] a boy-band number, I feel like a sex symbol in a way that is generally not available for women to feel. It's a chance to live out [a better] adolescence." And how is that received? "For the audience," she explains. "They get to yell and scream in a way that they couldn't back when they themselves were dealing with new-found raging hormones."

The Kings' Web site (www.kingsnthings.org) boasts them as "Austin's first and finest drag king troupe." Actually, they were preceded by a local group called Undercover. Recent attempts to speak to members of the group have proved fruitless. But, in one e-mail missive, they did explain that "We don't use the word 'drag' for our group; it implies drag queen type of acts." Semantically, they would be right, as the origin of the term "drag" is a contraction of the phrase "dress as a girl." Sociologically, it would seem, however, that an entire culture of cross-dressing women, quite comfortable appropriating the term 'drag,' has not only sprung up around them but has its own magazine (Kingdom, www.geocities.com/kingdomidkm) and annual conference (International Drag King Extravaganza, www.idke.org), and has been evolving for years.

It's precisely this history that makes today's drag community, and specifically FTM drag community, what it is. This is especially true in Austin, a town known and beloved for the intricate intersectings of its theatre, activism, film, queer, and music (especially punk rock) scenes.

In Austin, the royal lineage behind this new drag kingdom certainly boasts generations of drag queens, who (deservedly) get more face-time at the mostly all-male gay clubs and more ink from the gay papers around town. Drag kings can also claim descent from high-visibility feminist and queer activism of early-Nineties groups like Act Up, Queer Nation, Women's Action Coalition, Lesbian Avengers, and Radical Faeries. And then there's the world famous "Austin music scene."

Ubiquitous Austin musician/songwriter Terri Lord remembers a band of cross-dressing babes known as the Casanovas playing circa Raul's era, and I remember seeing Two Nice Girls' Kathy Korniloff portraying Tyler Moore at Chances (now Club DeVille) in 1993. According to Korniloff, Tyler "sprung fully formed at a party during SXSW 1992. Mrs. Fun [a jazz combo from Wisconsin] was visiting, and I decided to change clothes and draw on some crude eyeliner facial hair." Needless to say, Tyler was a total hit. Actor, writer, and bon vivant, the late Robbie Jacks went nuts -- fell in love, probably. Robbie "encouraged Tyler into being." (Tyler later became the subject/object of the early drag king film Butch Wax.)

Korniloff remembers the group deciding to go out with Tyler in full regalia. While Tyler may very well have been one of the first of his kind out and about in Austin, the interesting twist to this tale is that the group went to see the band Möniker. Möniker happened to be art rock band Glass Eye's heavy metal incarnation – featuring a very female Kathy McCarty fully passing as a very macho David Möniker.

So who was the first? It's hard to say, and who knows how many preceded even these early babes. Hey, strap on a few cocks, and there's bound to be a pissing contest, no? Maybe not. As Herrup observes, "It's never a battle of who's the best, but who's the first … That's very maternal, actually: I'm the mother! No, I'm the mother!"

For some, the mid-Eighties to early Nineties was the height of Austin's underground music scene, which in turn had impact on other underground cultures, as well. While the earlier effect of glam rock, for instance, made it OK to be androgynous, "Punk rock – because it was about aggression – made it okay to be butch in public," says Lord, veteran of many an Austin band, including the A-list of all-female bands of the last 20 years.

One of the bands for which Lord drummed was Power Snatch. I happened to be in that band too, and our first series of public gigs was as the backup band for a male-to-female (MTF) Cher impersonator. Our all-woman combo appeared as Cher's ex-boyfriends and husbands. It was not unusual for many a boy punk rock band to join the bill. So many of them cross-dressed or played naked anyway. The gender play of Austin bands like Girls in the Nose, St. Cecilia/Cecilia Saint, Boy Trouble, Pocket FishRmen, Noodle, and performance art collectives like PeACh (Performance Art Church) all set the stage. When ex-Two Nice Girls Gretchen Phillips began her handsome solo forays of the mid-Nineties in gorgeous double breasted suits, accompanied by a beautiful boy in lamé and sequins, all topped off with hard-femme go-go dancers, she raised an already high bar of Austin's gender-skew standard.

By this time, similar troupes and artists from across the country – like NYC's Club Casanova, featuring Mo B. Dick, and filmmakers like legendary trans icons Harry Dodge and Silas Flipper with their film By Hook or By Crook – had scheduled Austin as a tour destination for years. By 1999, an Austin expatriate known as the Texas Tomboy and local professor Sandy Stone appeared in the Monika Truet film Gendernauts. Texas-friendly hospitality, migas, some key opening slots, and a whole lotta couch surfing secured for Austin a place in the national pantheon of cross-country cross-dressers.

Today, gender-fuck, gender-skew, cross-dressing, drag, etc., seem to question their own conventions. It happens in the gay-male power-dynamic homage in Kings 'n' Things' "Bobby & Trevor," and it happens in the form of the fairly literal but always campy drag queens who lip-synch to Selena. It happens when UT professor Ann Cvetkovich and dance partner Alison Faust take to the stage in hot pants and boxing gloves and perform traditional femmy male-gaze stripper moves atop macho athletic poses and vogueing, and it also happens when the audience gazes back.

While it's somewhat given in the queer community that "what you see" is not always "what you get," drag's ability to skew the already skewed makes it more likely that you're not even going to "get" a lot of the stuff that you see -- at least not right off the bat. Drag is at once both a refusal to resign to the limiting confines of gender hegemony and an exploration of gender's mysterious potential.

So maybe it's time for me to start wearing my hair long, my sweaters tighter, and my lips redder? Who am I kidding? When I apply the signifiers of my own gender, I read as "drag queen."

Hmmmmmm. Come to think of it, that ensemble might look pretty nifty topped off with a big, black, bushy mustache ... .

Kate X Messer has been cross-dressing since the tender age of three. She asks that you understand that this is not intended as any sort of thorough history of this chapter of Austin drag. Corrections and contributions to this history are encouraged and welcome.