Why Do Black Divas Die So Soon?/Tales of a Gypsy Cowboy 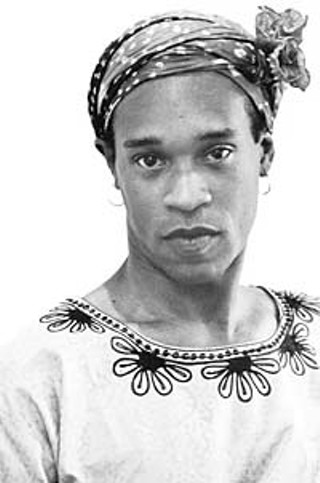 Can cowboys and divas play well together? Find out this weekend when Vincent Woodard's Why Do Black Divas Die So Soon? and K. Bradford's Tales of a Gypsy Cowboy play back-to-back at the Hideout. The self-described "gender warriors" explore in separate but complementary performances the barriers that limit personal self-expression and the binding parameters of what it means to be "male" and "female." "Society wants us to live in very clear boxes, and I don't live in those boxes," Bradford says. "Ultimately, being a gender warrior is living out loud."

Poet, performance artist, and community activist, Bradford was producing and performing in Calling in the Divas in 1996 when she met Woodard, then a Ph.D. candidate in English at the University of Texas at Austin (he finished this year). The two found they had similar ideas and experiences as gender warriors. Thus began an ongoing conversation about each other's work. When Bradford returned from Chicago earlier this year after performing in a drag king show, she called Woodard and the two of them decided it was time to bring their works to a larger audience.

Woodard's show is described as "the story of a black gay diva who comes of age in the 1980s and 90s, an era characterized by death and the loss of creative and spiritual genius within many black communities." Drawing from his studies in English literature, the African Diaspora, his own black Southern religious upbringing, and trips to West Africa and the Caribbean to study music, dance, performance, and ritual, Woodard promises a "spiritual journey," with movement and music providing a powerful foundation. Accompanying Woodard are vocalist Aisha Conner and violinist Roberto Riggio.

Bradford describes Tales of a Gypsy Cowboy as "a free-spirited gender warrior, traveling though time and space, through interior and public landscapes and social borders, and finally, the travails of being different" in a world that insists on homogeneity. "Our shows are honoring what we feel we embody day-to-day as gender warriors," Bradford says. "Doing these shows is like crystallizing that experience and showing it to the world [after working] side by side, midwifing each other."