Stories from the Midway

Tweet
print
write a letter
For a couple of weeks in late August through early September, the smell of corn dogs and cotton candy would merge with manure, dust, and diesel; the screams of teenagers would fill the air of Stillwater, Okla., and a blaze of light would blossom above a normally darkened patch of prairie. Surrounding this spectacle like moths to a flame were rows of cars parked on matted, yellowed grass, their windows dancing with brilliant neon reflections.

In the first few days of the fall semester of my eighth-grade year, I scored an unimaginable coup: a date with Jennifer Johnson, head cheerleader. Through a Byzantine circle of gossiping friends and giggling go-betweens, I managed to ask Jennifer to meet me one Friday night in early September at the Fair. It was a date -- as close as a 14-year-old without a car can get to one.

I had my father drop me off near the highway so I wouldn't be seen riding in our embarrassing old baby blue 1964 Ford Falcon with the boarded-up window. Having escaped mortification through careful planning, I was pretty high on me as I walked up the gravel road to the fairgrounds. If I played my cards right, I might even get to make out with Jennifer later -- maybe on the Ferris wheel or against the side of some stranger's car in the parking lot. Planning: That was the key.

Jennifer was already there, resplendent in her Dorothy Hamill hairdo, lips glistening with bubblegum-flavored gloss. Images of her and me engaged in a languid French kiss (or "tonsil hockey," as the goat ropers called it) flashed through my head. We made a couple of circles around the midway, earned a few stuffed animals of questionable worth, and bought each other cheap tin necklaces with our names engraved by a guy with a vibrating metal pen.

Then, I suggested we take a ride on the Scrambler. The Scrambler is so named because it looks like a giant eggbeater and whips riders around until their heads are filled with cranial meringue. Jennifer and I were having the time of our lives, gripping the safety bar in white-knuckled exhilaration, hair blown back, mouths wide open and screaming. Then the moth flew down my throat; a giant, dusty, wriggling nightmare, one of the thousands that fluttered innocently around the neon lights on the ride. Instantly, my eyes popped out, and I began to gag. Jennifer looked at me with genuine concern, concern laced with the fear that I might be about to throw up, a real deal-killer when it comes to tonsil hockey. But I didn't throw up. After what seemed like a blurry eternity, I spit up a slimy pupae, a huge, gooey, alien life form that lay twitching in my open palm. Red-eyed and gasping for air, I held back the urge to vomit.

"What is that?" Jennifer asked as the ride wound to a halt. I did my best to formulate a suitable explanation that would ease the revulsion I could see creeping across her face, but all that came out of my mouth was, "A moth." Maybe it wasn't an entirely satisfactory response, but no amount of eloquence could have explained the wriggling spitball in my hand.

At the end of the evening, Jennifer gave me a peck on the cheek. Part of her never got off that Scrambler. 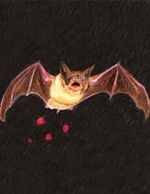 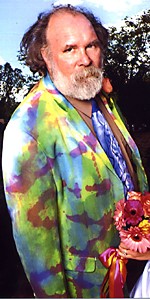