Austin is a Neverland that brings out the "Lost Boys' 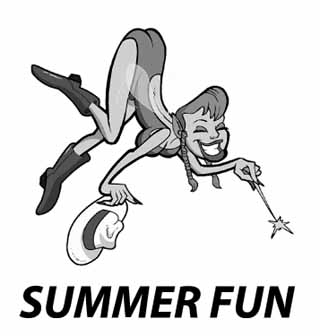 The old joke about Austin having the best-educated bartenders and cabdrivers and store clerks is true. Don't be shocked to learn that your babysitter has a Ph.D. This town's mystique as a place to be forever young probably came of age in the Sixties when the DYOT ethic was born -- Do Your Own Thing.

But instead of acquiring a little fairy dust and truly being able to fly, Austin boasts a disproportionate number of people with delightfully eccentric lifestyles or careers that began in most unconventional ways. They work hard to manifest DYOT, and they give Austin its distinctive personality.

These are the real Peter Pans of Austin.

Many (but not all) musicians are Peter Pans (especially those in the Uranium Savages). Prince, the proprietor of the Japanese toy store Atomic City, has pixie dust in him (as do so many of Austin's vintage and kitsch entrepreneurs). So do artist/performer Randy "Biscuit" Turner, ex-Armadillo artist Micael Priest, and Wali Stopher, best known as the model for the figure of "Oat Willie." Slacker director Rick Linklater has some Peter Pan in him, as does From Dusk Till Dawn director Robert Rodriguez and Beavis and Butt-head creator Mike Judge (hmm, interesting that all of these examples are male ...). Having Peter Pan in you can be a very good thing. Just ask anyone who annually attends Austin's ultimate Peter Pan event, Eeyore's Birthday Party.

Being a Peter Pan in Austin is a little different from the premise of James M. Barrie's character, who didn't want to grow up. You're not Peter Pan in your 20s; you're just a slacker. You must be at least 30 to be a Peter Pan. And it's okay to work. Working hard and making a decent living at the job or profession of your choice provides a high measure of personal and artistic gratification. That's the 21st-century version of not growing up. The irony is, you have to be grownup to do it.

Some people think of the Chronicle as Neverland, and they could be right. Many of us are well over 30 and work hard. Back in 1981, pre-Chronicle Editor Louis Black wrote a piece about the local rock critics for UTmost magazine. In it, he called me "a worldly Wendy with her Lost Boys." I was flattered and long since felt a kinship with the adventurous heroine of the story.

I'd rather be Wendy than Peter Pan, anyway.

In London last May, I stayed in the touristy Hyde Park neighborhood, home to Kensington Palace. Hyde Park is also home to the Peter Pan statue, for author James M. Barrie lived across the street. When the statue was placed in the park in 1912, Barrie arranged to have it done in the middle of the night to preserve its magical appeal.

It was near dusk that cool spring afternoon with rain clouds gathering rapidly when I first saw the statue tucked among the trees, bronze fairies at its feet. There may be no city more legendary in fairytales than London and as the wind whipped up little leaf eddies, the sky deepened from dark blue to black purple behind this tribute to endless childhood. It was easy to see how a city keeps itself artistically inspired.

And that is, perhaps, the very same sort of thing that keeps Austin magical. Many come for education, many come for work, enough found something special about it. For all who stay, Austin holds eternal secrets and joy.