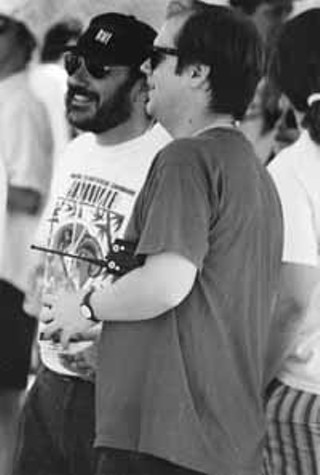 Because of my background promoting shows and booking bands, I began working on sponsored music events for the Chronicle. I worked with local radio stations to run advertising for events and for each issue of the Chronicle. I became the unofficial "music business guy" on the staff. I was involved with a group of local music business people who were working with the Convention and Visitor's Bureau to promote Austin's music as a tourist attraction. While I was running my label, I had met the founders of the New Music Seminar, an influential New York music convention, and we invited them to come down to Austin to talk about setting up a similar event here. This led to a big group of Austin bands playing their convention in New York in the summer of '86. The Seminar announced that they were going to hold an Austin event in 1987 to be called New Music Seminar Southwest.

Louis Jay Meyers ran a company called EZ Money Productions that specialized in promoting reggae shows at Liberty Lunch and around the region. He was one of the group of people who organized the promotion at the New Music Seminar. Louis Jay began spending more and more time hanging out at the Chronicle, dropping by often for the after-hours bull sessions that would run late into the evening. A few months after announcing their Austin event, the Seminar announced they were backing out of the deal for 1987, with a possible future date to be announced. Louis Jay and I began talking about swiping the idea of putting on a conference and festival from the New Yorkers. We took the idea to Nick and Louis.

Initially, Nick was noncommittal and Louis thought it was a crazy idea, but they were willing to talk about it. We began arguing the merits and risks of putting on an event of this nature. For the sake of the argument, Louis took the position that it wasn't a bad idea, but if we failed it could take the Chronicle down with it. I took the position that pulling it off would be difficult, but we could do it. I also argued that like every other institution in Austin, the Chronicle would be taken for granted unless it could demonstrate it had clout outside of town.

Louis was winning the argument, which went on for weeks. His point was that we didn't really have the major connections needed to bring the music industry here en masse from L.A. and New York in the way the Seminar could. During one session, in a moment of inspiration, I said, "We don't have to get those people. We can just invite some bands and music people from the area -- Dallas, New Orleans, Houston. Get some other alternative papers like The Dallas Observer to sponsor it. Have a day or so of sessions and showcases, and then conclude with a big Sunday barbecue and softball game." Nick looked up with a smile on his face, interested for the first time in days in the discussions. Louis cursed me, knowing that I had found his Achilles' heel. There was no way Nick was going to turn down a good excuse for barbecue and softball.

Once the debate was over, Louis and Nick were solidly behind the project. A lot of time began to be devoted to establishing what we wanted to achieve with the event. We didn't want to paint ourselves into any corners by coming up with a limiting concept. We didn't want to be tied to any particular style of music or type of bands. We began a series of weekly meetings held in Nick and Louis' office. These were marathon sessions with a revolving group of people that included Louis Meyers, critic Ed Ward, Jungle Records' Bruce Sheehan, and Chronicle staffer Jeff Whittington, among many others.

It was a struggle to come up with a name. We wanted something that suggested a regional flavor, but we didn't want a name that made it sound like it was just going to be about Austin or Texas artists. We believed strongly that for the event to survive it would be crucial to draw in people and artists from all over to participate. The name "Third Coast" was suggested and then quickly rejected because it was also the name of the Chronicle's main competitor at the time. After many hours of everyone trying out different names, Louis Black, lying on his back on the floor, spoke the South by Southwest name for the first time, and we all seized upon it. I quickly sketched the "SXSW" abbreviation in all caps on a piece of paper and held it up for all to see.

We announced SXSW at a BMI seminar held at the Hyatt in October of 1986. Immediately, we were surprised by all the pledges of support we received. We'd anticipated that it might be difficult to sell the concept of inviting a bunch of out-of-town bands to play to the local community, but everyone seemed to get behind the idea. Louis Meyers lined up a dozen clubs who agreed to let us book showcases in their clubs during the event which was intentionally scheduled during UT Spring Break, traditionally the slowest weekend of the school year.

We immediately fell into a pattern of 16-hour days, all of us having to take care of our day jobs, and then working late into the night on SXSW. Louis was organizing a network of alternative papers in cities like Dallas, Denver, Houston, New Orleans, and Phoenix. At night, after Chronicle production work was done, Nick and I would work early into the morning preparing ads and brochures at the typesetting machine. Louis Jay was making and fielding calls from the hundreds of acts who would eventually perform. Ward, Sheehan, and I worked on assembling a schedule of panel discussions. People started showing up at the office offering to volunteer in exchange for a badge, and we put them to work answering the phone and sending out mail.

But at the same time, everybody worked on everything, SXSW still being small enough for all of us to be involved in every aspect of it. We operated by consensus, meaning that if we couldn't agree then we kept talking about it until we did, or we dropped whatever it was we disagreed over. This was a very tedious process, but it served SXSW well, weeding out the weaker ideas until only the strongest remained.

We had started with a goal of drawing 150 registrants to the debut SXSW. Suddenly, in February, we started getting calls from all over the country from people who wanted to attend. An ad and story in Billboard magazine sparked interest on both coasts, and before we knew it we had executives registering from dozens of major record and publishing companies from New York, Nashville, and Los Angeles. By the time the first SXSW ended on March 15, 1987 more than 700 people had signed up to attend.