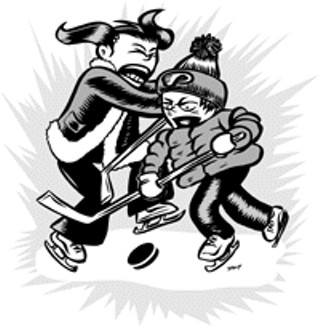 They call themselves the Bruins

We think that name is crumbs

We have a better name for them

We call them Boston Bums!

This is the chant my brother and I have made up. It's the early Seventies, and I'm maybe 11, so that makes him maybe nine. We are hockey fanatics.

The Bruins, led by Bobby Orr, are our arch-nemeses. They must be destroyed. My brother and I plant the seeds of this destruction as we contemplate their unworthiness on the planet and plot against them via our little co-authored rhymes.

Daddy calls us "the Twins," and the Twins can do no right. My brother could mow the lawn, paint the house, cure cancer, and tidy his room all in the same day but if I, say, bust the stereo, we are both in deep shit.

Vice versa. Suppose I cook a lovely dinner, tie up the recycling, or teach the baby to spell her name in English, Arabic, Sanskrit, and cuneiform. It doesn't matter. If Zeke (as Daddy calls my brother when he is pissed) has failed to take out the garbage, we'll both hear about it.

"You two. You're twins." he says this in that so-disgusted-with-us tone of his.

Yes, we are, damn it. And at least we have each other. And hockey.

In the kitchen there are two tables. The one up against the wall is covered in textured orange contact paper. Textures and colors are in. We stain everything. Or shellac it. Or antique it. Or contact paper it. Always something. Get me the hammer/scissors/paint brush. We're going in ...

On the end of the orange textured table is a little TV. Black & white. This is where we watch the Flyers on nights when it's my turn to clean up after dinner and a game is on. My brother is the only boy and doesn't have to cook or wash dishes. So he sits and watches the Flyers. And I stand and wash and watch the Flyers and think of ways to torture him.

I am, after all, the big sister. (Fuck him for not having to ever do the dishes!) One night, without knowing it, we create one of those moments that we will grow up and force our children to listen to us recount.

I am looking at the leftover scrapple. Scrapple -- like the Flyers and soft pretzels, like the Amish and hoagies -- is a regional thing. What it is, is pig or cow brains mixed with other stuff you, personally, would not want to extract from the beast in question. You definitely want someone else to do that and mash it (scrapple is mashed) into this long grayish, black speckled brick. You slice the brick into patties and you fry it up.

It's a breakfast thing, but we eat breakfast for dinner sometimes. Now there's some scrapple left, and I'm looking at it, and I'm not getting out the damn tin foil to wrap it up. So I take the last slice or two or three -- cold, congealed, gray gray gray. I slap it between some recently defrosted slices of week-old white bread we get for a dime a loaf down at Consumer's Supermarket. And I cover it in ketchup and say, "Here. You have to eat this."

Remember: I am the big sister. We're still at the point where, when we wrestle, I'm stronger and can kick his ass. He eats this cold scrapple ketchup white bread creation. I find this pants-wettingly funny.

Hockey never made much sense to me beyond the obvious: sticks, a puck, nets, and all those brutal, brutal white men. I, human oxymoron, weep at the sight of a dead animal yet cry out joyfully watching these grownups wallop the hell out of each other with fists and sticks.

Beyond goalie, I can't tell you who played what position; I can't quote statistics. But I can tell you the wild enthusiasm that swept through the Delaware Valley when all those imported Canadians brought Lord Stanley's Cup to Philly in '74 and again in '75. I do still mishear whenever Elton John sings, "Bennie & the Jets" on my radio: "Bernie in the Nets."

In '76 I am on the cusp of adolescence and my brother ... my twin and I, we are drifting apart. We have spent so many nights watching the games. Watching Starsky and Hutch, Fantasy Island, Love Boat. Playing rummy. Cheating at rummy. Soon, we'll be too old to wrestle anymore. Not appropriate. Not fun, either. He is getting bigger. And stronger. I'm not winning anymore. I hate it.

He'll never forget the first day I went off and did something without him, left him behind. He waited maybe 20 years to describe the hurt that day. Like a slapshot upside the head.

A couple of months ago, I'm back in Jersey for a visit. My nephew Timmy plays hockey. We go to the rink in Atlantic City, prominent Flyers icon on the outside wall, and my blood turns orange once again. Inside, my sister cheers her son. My brother-in-law screams, "Play the man! Play the man! Both hands on that stick!" while my nephew skates around, one hand on the stick.

I still don't know the rules. I do know, however, that the older I get, the odder it seems. Who invented such a game? Was it one of those after-hours pub jokes that got taken too far by some drunk Canadian shouting, "I know, let's put thin metal blades on our feet, step out onto ass-cracking slick frozen water, and slap at a little hard black circle with some sticks, which we can also, if necessary, use to clobber the shit out of each other!"?

Regardless of its bizarre nature, I still love hockey. Hockey hockey hockey! Back in Austin, fueled no doubt from my visit back to Flyers land and my nephew's game, Ice Bat fever flaps up behind me, bites me hard on the neck. I haven't seen them play in years. I know, I know ... this ain't the NHL. But then, this isn't Philadelphia, either. To me, all that matters is that there will be skates and sticks, a puck and players moving, moving, moving. I'm no hockey snob; show me some ice action (even a slow-cruising Zamboni) and I am a sated customer.

With me today: my son Henry, his friend Max, and my friend Erik. Erik is a former child hockey player. He does know the rules. He jockeys for a spot between the boys and me. He is going to school us all in the finer points of this sport. Not just the playing of it, but of proper spectating, too.

He begins with cheap beer in a plastic cup and a little bag of peanuts. The boys choose questionable hamburgers. I forgo concessions.

The Bats aren't at the top of their game today, and Corpus seems hellbent on winning. "I see one team showed up today," announces my personal commentator. "I'm cheering for the team that's here to win," he adds, jumping to his feet when Corpus makes a breakaway. I wait to be pummeled with sundry items by the Bats fans all around us -- like that woman wearing foam bat ears, or that man with the shelf-belly, poured (all 300 pounds of him) into his Bats jersey as if he is waiting to be called onto the ice any second.

"I'm going to the bathroom," I say, also jumping to my feet.

Returning from the Porta Potties I find Erik standing again, and he's got his shirt pulled way up.

"I'm showing the boys how to do 'Show us your tits!'" he answers, as if this is obvious. In fact, I suppose it is.

The boys are rolling on the floor at this lesson. They will also get more than a small chuckle out of our self-appointed host's knowledge of (and loud singing along with) every single song snippet the deejay blares over the P.A. to keep us pumped.

The rink is my personal time machine. All the sentiment this hockey game brings sprays over me like ice from a skate blade, blurs my view of the present, sends me hurtling back through the past. At one point, all those jerseys blur, and I am cheering in my head. I flash to Philly, and finally, back to Austin.

Erik is as silly as my brother ever was back when we were kids. And as I sit beside him screaming at the players in the rink, I remember how it was. I cut loose with the same laughter inspired so long ago by late night anti-Bruins sessions and force-fed scrapple.

This weekend sees the last two home games of the regular season for the Austin Ice Bats. The Bats are currently ranked third in their division in a three-way battle for first place. Friday, March 23, 7pm, the Bats face off against Lubbock and on Sunday, March 25, 3pm, against Corpus Christi. Both home games will be played at the "Bat Cave," aka, the Travis County Expo Center on Decker Lane between 290 E. & MLK. After that, the Bats compete in the playoffs. Official playoff schedule is TBA; for more info, call 927-PUCK.