The Austin Avalanche of Rock & Roll!

When IRS Records' 'The Cutting Edge' Came to Town and Made Me Want to, Too 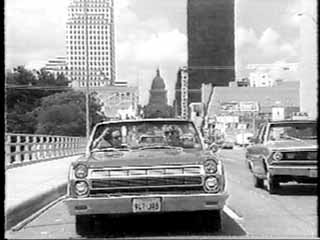 Zeitgeist bass player Cindy Toth. The author also had asymmetrical hair and a jacket and shirt just like that.

"They say that 90 people a day move to Austin. The signs of growth are everywhere. Changes are not always welcome, however. Some of Austin's best clubs have disappeared. Liberty Lunch, one of tonight's featured clubs, won't be around much longer, either. Through it all, the bands survive; they play at parties, outdoors, and sometimes, yes, even in real garages ..." Daniel Johnston says, "Hi, How Are You" to the entire planet.

"I threw all my belongings into a garbage bag and out into the worldness I did roam ..." 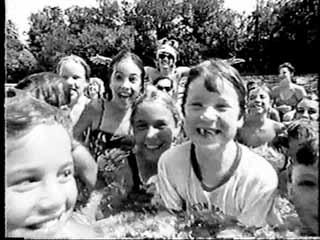 "Joe!" I whispered sharply into the phone like Jimmy Stewart in Rear Window, suddenly and absurdly mindful of late-night answering machine etiquette. "Pick up the phone! If you're there, turn on the TV right now!" I hung up and settled back into the couch. A few more minutes passed; I tried again. "Joe!" I implored, "If you're just getting in, turn on MTV right now! The Cutting Edge is in Austin, Texas, and there's this band on TV, Joe, Glass Eye, and they are just like us! Zeitgeist is on, too, Joe. Turn. On. The. TV!" Impatiently, I went back to the couch, no less desperate to share my indie rock joy with anyone.

But there was no one. We weren't much like Glass Eye, really. Hell, we weren't fit to lick Stella Weir's cute little vintage shoe, truth be told. It's just that Joe, my old high school pal and sometimes bandmate and I played goofy "alternative" music, agit-y, ratchet-y. We shared a love for Roxy Music, Talking Heads, James Brown, Funkadelic ... and finally got around to doing something about it by actually making music instead of sitting on our asses yammering about it.

Like so many newly self-dubbed "alternative" musicians, we didn't fit it and didn't care. When you live in a cultural armpit like the pukey Republican tourist town in Florida where I subsisted at the time, you couldn't expect to. To make matters worse, this was back in the day -- 1985 -- before cell phones and instant messaging, before the Internet and eBay, a time when info about underground rock bands wasn't available at your fingertips. You talked on the phone, a lot, to friends who had broken through to places like New York, San Francisco, or Athens or Portland even -- in the hopes of making connections, building community, even if it meant having to do it through the U.S. Postal Service. You wrote lots and lots of postcards and invited all these traveling freaks to come visit you in South Florida (We're so close to all the attractions!). Cable TV was your friend, because it broadcast things in from somewhere else and because you could only get to the record stores and clubs in West Palm or Miami maybe once a month or so. A familiar sight in Austin, then and now

The Cutting Edge was an hourlong show on MTV. For those of us out in the sticks, it was a lifeline, an encyclopedia to certain strata of "underground" culture. It predated MTV's somewhat spotty, often smarmy, yet somehow enduring 120 Minutes show as the network's token nod to the global web of underground artists, who, despite the constant conflict between making a living or making art, couldn't stop if they tried. The Cutting Edge aired only once a month and late on Sunday nights, at that, buried in a slot that made no sense to anyone steeped in the indie rock and zine culture that "thrived" below the mainstream radar at the time. The TV show wasn't radical or anything, after all; it was produced by IRS Records -- the early home of the Police and REM, for godsakes. It's not like it was the G.G. Allin hour or anything. But this was a time when even college and community radio stations played it safe (at least in Florida), keeping the daytime and prime time programming within the rather staid confines of more established rebel music like the blues, or zydeco, or roots-rockabilly. Music even vaguely resembling punk rock, quirky pop, art noise, or anything not yet mass-accepted by the Belinda Carlisle and Wang Chung set, was condemned to late night.

Finally, the phone rang. "Joe! Are you watching?" We watched a little bit together and marveled at the similarities between this foreign and cohesive little scene and the cobbled-together little underworld in South Florida that kept us sane.

"Man, that Biscuit guy reading poetry looks and sounds just like Barry!" Joe howled, referring to the Big Boys' Biscuit Turner and our own Barry Stock, a goofy big-boy and genius musician in his own rite, from Orlando, F-L-A.

"Yeah, and did you see that Daniel Johnston dude? Is he Jad Fair or what?" I laughed, using Austin's then-unknown savant-y poet laureate to facilitate another cockeyed parallel reality theory, comparing him to the legendary Half Japanese front guy, who came down to Florida every now and again to play. "Did you see Glass Eye?" I asked. Nah, he had walked in too late, but cracked up when Daniel Johnston came back on the screen. "Oh, my God," he said in a whisper of awe. "You're right ..."

"And Joe," I added, before we wrapped up. "Zeitgeist did the Charlie Brown Christmas song," like our silly little band Stank 'n' Shake had done so many times.

The show's lineup was jam-packed with Austin scenesters old and new, a veritable Austin "Who's Who," many of whom are still quite active in bands: The "New Sincerity" poster children Zeitgeist (featuring John Croslin, who later went on to produce half of the rest of Austin), True Believers (ever heard of this guy, Al Escovedo?), and Dharma Bums (the first place a lot of folks ever saw kid rocker Joe McDermott), three bands whose jangle rock all but defined the mid-Eighties Austin sound to the rest of the world; garage rockers Doctor's Mob and Wild Seeds (Mike Hall's first appearance to many), Austin's fuzz component, which complemented the sincerity folks nicely; the impossible-to-classify art nuts Glass Eye, featuring the majestic warble of one of the generation's finest voices, Kathy McCarty, and another well-known Austin producer, Brian Beattie. Ex-Big Boy Biscuit Turner (later of Swine King) read poetry and fellow ex-Boy Chris Gates played with his band, Poison 13. The show also featured the first national appearance of Timbuk 3, "discovered" at the shoot and hurtled to one-shot stardom with their hit "Future's So Bright." There was a song by roots-rockers the Tailgators, and a wacky coupla numbers by Dino Lee & His New Las Vegans (now Mr. Fabulous), who predated most alternative loungeophiles by about a decade. Texas stalwarts Joe "King" Carrasco and Brave Combo played, proudly vaunting Texas music's ethnic influences (Mexican and German, respectively), as did singer Toshi, admirably honoring Hank Williams' "Hey Good Lookin'." The show's flashpoint, however, marked the debut of one Daniel Johnston, the charmingly off-balance singer-songwriter who created his own legend anytime he went off his medication and then lived up to it all with some of the most incisive and for-real, gut-wrenching songwriting this side of Woody Guthrie.

Aside from the great performances (the show even ended with Austin's signature cover number, "Sweet Jane," performed by Zeitgeist) and hipster cachet provided by affable host Peter Zaremba, the show captured something akin to that oft-muttered "sum greater than its parts." The Cutting Edge Austin episode captured a feeling, a camaraderie that resembled the other attempts at community across the states by the varieties of artists and musicians in search of tribe, kin, and home. The footage shot of backyard barbecues, of the guys hanging around Red River Motors singing and playing, of the kids at Barton Springs, of downtown Austin as it began to grow and creak under the weight of her own economic boom, of musicians coping with a town they loved changing forever (sound familiar?), all captured the spirit, not only of Austin, Texas, 1985, but of the rest of us who got here as fast as we could.

I finally moved to Austin in 1992. Within the first week (and I swear I am not making this up), the forces of random coincidence put me behind Slacker-man Rick Linklater in line at the Fed Ex office on Sixth Street, in front of Joe "King" Carrasco as we both waited to get our Texas driver's licenses, and next to Kim Longacre of Zeitgeist/the Reivers, picking out CDs at Waterloo Records. Unremarkable occurrences, I'm sure, to most of you longtime Austin veterans, but for this Violet Crown newbie, it was prophetic happenstance, shedding a happy lavender light on so many good times to come, proof that in Austin, some people were making art and couldn't stop if they tried.

Chronicle Features Editor Kate Messer worked with Daniel Johnston and Jad Fair in the late Eighties and later with Austin's Happy Family and Pocket FishRmen, the two groups truly to blame for her move to Texas. Tonight, Wednesday, March 14, she is at the Austin Music Hall enjoying the "86ed" segment of the Austin Music Awards Show, featuring many of the musicians from The Cutting Edge Austin episode.

Many thanks to Tim Hamblin, Jo Rae DiMenno, and Terri Lord for their memories of this Austin era and assistance with facts.