Shades of the Past

Austin's ghosts, from pioneer times to the present 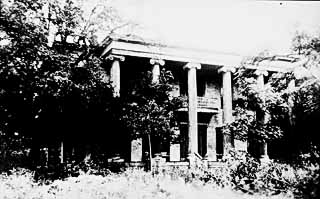 The Raymond Mansion, which stood where Sixth Street and Lamar is today, was the scene of a ghostly rendezvous between a blushing belle and a Union soldier.

Maybe the souls who lived here in the distant past, even those whose names and circumstances are forgotten, haven't receded as far from us as we think. Some people believe that the dead still go about their earthly business, or relive their darkest moments, in the same time and space we now occupy, in the old buildings where their shades have settled in like dust. Did the lives of certain of our forebears cut a groove so deep in the tapestry of time that their sighings, their smells, their very aspects have not yet faded from this earth?

Tales of ghostly hauntings are very old in Austin: One of the first, appearing in print in 1898, tells the legend of a famous Texas scout and his stolen Comanche bride, said to have died together on the grounds of the original Texas Capitol, at Eighth and Colorado. The father of the girl slew the scout in revenge for taking her from the tribe, and she in turn thrust a knife through her heart, falling over her lover's body. For decades afterward, witnesses claimed the tragic couple still wandered the grounds at night. The Glasscock house, built not long after the Civil War, was one of the city's most feared haunted houses until it was torn down in 1923.

Some ghost stories recall an Austin we can scarcely conceive of: a log cabin settlement reduced to desperate rations in the gloomy final days of the Civil War, when cornmeal mush was served at Texas Gov. Pendleton Murrah's inauguration. In 1864, Murrah's nephew came to visit at the Governor's Mansion, where he fell rapturously in love with the niece of the governor's wife. She laughed at his advances, so the story goes, and at midnight the house was startled awake by a gunshot. The nephew was found sprawled in a guest bedroom, a bullet through his head. As the story goes, the blood from the suicide was never even cleaned from the walls until 1870, because Murrah fled Texas shortly thereafter as Union troops advanced. That wing of the mansion was thereafter dreaded by housekeeping staff and visitors, who complained of doors opening on their own, cold breaths, and frightful moans.

When Union troops arrived in Austin, they camped along the banks of Shoal Creek, which flooded and created a yellow fever epidemic. The dying soldiers were boarded at a mansion still standing today at 23rd and San Gabriel, and many were buried on the grounds. The house was later purchased by Col. Andrew Neill, a Texas Revolutionary War veteran, who died there in 1883 (It's now known as the Neill-Cochran House). Neighbors used to report that Neill could still be seen riding his horse in the yard, or even having tea with Gen. Robert E. Lee on the balcony. And on chilly nights, footsteps are said to echo in the streets near the house, perhaps the distant echoes of soldiers' boots.

An aching melancholy for a doomed era perhaps helped popularize a vision once reported at the Raymond Mansion on West Sixth Street a few decades after the close of the Civil War: At night, a young woman in a ruffled, rose-colored gown descended the stairs into the arms of a Union soldier who galloped up to meet her. The story reported in the news was that a real-life Union sympathizer did fall in love with a woman who lived there, but he could not find her when he returned home from the war. The palatial Driskill Hotel, opened in 1886, is said to house more ghosts than can be listed here. Sightings are reported in the hotel to the present day, including that of a former housekeeper in a long Victorian dress who appears to be still fussing with flower arrangements in the lobby, a longtime resident from the turn of the century who checks his pocket watch on the elevator, and a woman who carries shopping bags into a fourth-floor room where a wealthy Houston woman committed suicide in the early 1990s, after her fiancé canceled their wedding.

Some of the mansions of the city's West End used to excite ghost tales as they succumbed to decay. The Glasscock home, which dated from the 1860s, was perhaps the most dreaded haunt of all. By the 1920s, when the house was torn down, its towering walls of red brick were sullen and unpainted, its windows, its portico sagging between twin broken columns that framed a darkened entrance. A woman with "sad eyes and sorrowful mien" was said to roam the rooms. Some supposed it was the wife of a Yankee carpetbagger, whose dying wish to be buried in the house's basement was never fulfilled.

A teenage boy who dared to enter the home one evening was killed there, but not by an angry housewife. Startled by a cat, he hurtled down the stairs and caught his jacket on a baluster. He was found hanging there a few hours later: The newspaper said he died of fright. One night, a reporter with the American-Statesman had himself lashed to one of the home's pillars so he could observe what went on there. A storm rolled in, and he, too, nearly caught his death of fear -- not from apparitions, but from falling mounds of plaster.

But the most mysterious ghosts are the ones that appear unannounced, with no backstory that would anticipate their existence. Invisible footfalls that have been heard pounding up the staircase at the Speakeasy, followed by blood-curdling screams. A playful presence seems to run the elevators up and down all hours at the Driskill, where Eurythmics singer Annie Lennox once reported that an unseen hand picked out her evening wear for her. An unknown shade moves barstools and oozes mist at the Bitter End, a building whose address once placed it in the former prostitution and gambling district known as Guy Town.

The David Grimes Photography Studio at 503 Neches houses one of the most historically intriguing cases of paranormal activity. A psychic, reportedly without knowing the building's history, once said she heard a black man laughing there, amused, she said, that he had become his own client. Records show that the building was once owned by a black undertaker named Nathan Rhambo, who opened a funeral home there around 1915 and was murdered in 1932. The murder, blamed on a young black man who police said was out to rob the wealthy Rhambo, threw the city's black community into an uproar (see "Killer Repuation," above). Does Rhambo carry on in his old shop because he has something to say about the circumstances of his murder?

Maybe, like so many of Austin's other shades, Rhambo just isn't ready, or isn't able, to let the past die away.