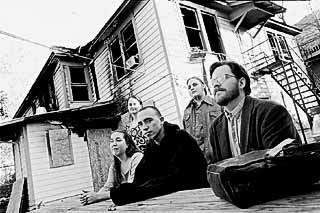 Despite Santa Claus' best intentions, Christmas cheer came to an abrupt end for the residents of the West Campus student co-op Arrakis. During the evening of December 26, 2000, at approximately 6pm, the two-story, 10-bedroom, three-bathroom structure caught fire, effectively destroying the building and leaving its 12 student residents homeless and possessing nothing but the charred remains of their former lives.

The fire was caused by an unattended toaster oven that was supposed to switch off after toasting the two waffles within to a nice golden brown. However, the small appliance chose to ignore this mandate and went on to burn the waffles and house to a dark shade of black. The toaster oven, according to now-former resident Whitney Young, was "notorious for not switching off," and the entire episode is now affectionately referred to as the "waffle incident."

The severity of the blaze was exacerbated by the interior design of the 1930s wooden house and by flames coming into direct contact with a gas line, directing the path of the fire into the attic, where it quickly spread through the cavernous walls and ceiling, making any real possibility of sustained firefighting extremely hazardous. Firefighters eventually left the scene at approximately 5am the following morning. Fortunately, due to Christmas break, only two residents were still at Arrakis and neither was injured.

The sense of loss isn't, however, merely directed toward the destruction of inanimate personal belongings but rather to the institution that was Arrakis and the effect it had on all those who have lived there.

Arrakis is one of eight student co-ops run and owned by local nonprofit organization the Inter-Cooperative Council (ICC). Due to both its age and usage over the years, Arrakis has become somewhat of an icon among the Austin co-op community. Built in 1937, the building has stood on Pearl Street with its door open for all. Originally it was used as a boarding house. Even now, former lodgers drop by to see how the place is doing. One gentleman recalled on a recent visit how he had been sitting in the former lounge area and heard over the radio the news that Pearl Harbor had been bombed. In 1975, ICC, in order to provide affordable housing to students, bought the property. Their aim was and still remains the provision of affordable housing for students while exposing them to the unequaled experience of running a house via democratic rule and living with people from all walks of life.

Being the smallest of the current ICC roster of eight co-ops, housing only 12 students, Arrakis residents quickly develop a community feel and sense of fellowship that other, larger co-ops may fail to cultivate. This sense of the worth and value of co-op housing was so strong that two former residents went on to work with other cooperative organizations after leaving Arrakis. Melinda Everett, a resident of Arrakis from 1992-95, who prides herself as being an "Arrakis Alumni," currently works as the membership director for the local Student Heritage Houses and expressed great sadness at the loss of Arrakis as well as concern that such a unique house "will never be duplicated." James Canup, another former Arrakis resident, found the experience edifying enough that he too would work for various co-op organizations both on the national and local levels. "It was a new experience for me but one that I totally bought into. [A housing cooperative is] a good way to organize a group of people, one that makes a lot of sense," he said.

The current residents also felt this closeness and affection toward their living situation -- an intimate setup that differed from their experiences residing in larger co-ops. Odin Noble, who arrived at the house just in time to see it in flames, said that Arrakis was unique in the openness of its residents. "In some larger co-ops, you may only see the other people when they emerge to eat. Other than that, they sit in their rooms like pot-bellied pigs. But here [in Arrakis], it is a lot more open and friendly," claimed Noble. Whitney Young, who was in Houston at the time of the fire, was also visibly upset at the breakup of the house. "We were very close," she said, wistfully. "We had our Christmas party here and everything."

For the now-ex-current residents, however, their concerns are of a somewhat more expedient nature. Aside from dealing with the emotional upheaval that must come from effectively being evicted by two toaster waffles, they, like the vast majority of student renters, were uninsured, and all of them lost a considerable amount of personal property. These items range from the usual stereo equipment and compact discs to personal writings, lecture notes, furniture, and as Odin Noble described it, "quite a nice bicycle." Those few things that were salvaged from the house were either water damaged, burnt, or at the very least "smelly."

The average loss per person is estimated at between $5,000-$10,000. Almost immediately after the fire, other ICC co-ops began donating space and clothing to the Arrakis 12. The act of altruism spread quickly throughout the Austin co-op community, which numbers somewhere in the region of 1,000 people, second in size only to Berkeley, California's student co-op body. Austin currently has three major student co-op associations as well as a collection of independents. Donations of money, help, and a pile of clothes "five feet high" were quickly provided, although no amount of charity will ever completely replace all that has been lost.

ICC was also quick to act, providing rooms for all of the residents and offering each a $100 credit. Local businesses are also working with the co-op council to provide the students with various items lost in the blaze; the University Co-op has offered to replace textbooks that were burnt. ICC has also contacted national cooperative organizations such as the North American Students of Cooperation (NASCO) in hopes that they will assist with fundraising activities and publicity. There are also plans in the works for a local fundraising event.

The future of the Arrakis building is still to be decided, but the consensus among former and current residents is to rebuild. The building itself was insured, and ICC is preparing for lengthy dealings with the insurance company. Shelley Earley, general manager of ICC, "guess-timated" rather optimistically that some kind of conclusion would be reached "within three to six months." Although an expert in the minutiae of student housing, she is perhaps a novice in the art of insurance claim closure.

For the time being, however, the Arrakis building stands alone, its windows blown out, its cream-colored paint work blackened beyond recognition, and the heavy miasma of an Austin institution lost hangs in the air like the thick black smoke that recently engulfed it.

For Austin's co-op community, the Christmas season may very well be officially over, but the spirit of giving has never been so relevant. ICC will be taking donations of furniture, clothing, money, or anything else you care to give for the conceivable future at their head office at 510 W. 23rd in West Campus.

Toaster ovens, however, need not apply.