Stacked in Her Favor 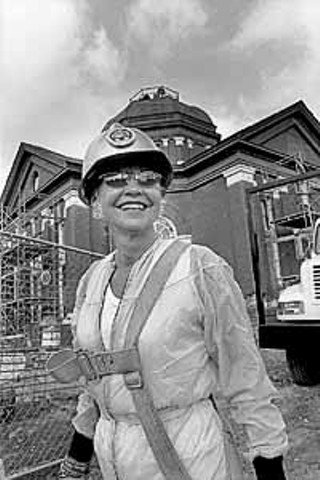 The small town of Lockhart was thrust into the media glare last Monday, as locals gathered by the dozens to witness neighbor and director of library services Rose Aleta Laurell scale to the top of the Dr. Eugene Clark Library. Her purpose? To take up residence atop its dome and stay there until a $20,000 fundraising goal is met. The madness kicks off a week of activities that include face painting, high school cheerleaders, and numerous band appearances, all in the hopes of raising the money required to construct a much-needed children's area as a part of the library's renovation and expansion.

A raffle, apparently, was all too simple.

This week's plan to hoist Ms. Laurell upon Dr. Clark, as it were, was scheduled for 10:30am. By 10am, the crowd had swelled into the teens.

In 1996, Lockhart residents approved a number of renovations, including the purchase of the Masonic Temple situated next to the library. Eventually, the refurbished temple will house a second-floor technology room providing Internet access and educational courses. A connecting tunnel will be constructed between the two buildings.

The building in question lays claim to being Texas' oldest continually operating library, built almost exactly 100 years ago with $10,000 bequeathed upon the town by former resident and general practitioner Dr. Eugene Clark. Clark, the son of a Civil War soldier, lived and practiced in Lockhart for some 13 years in the late 1800s before studying in London and Vienna and eventually returning to his native New Orleans. Of the monies given, $6,000 went toward the construction of the red-bricked, Greek cross building (which somewhat resembles a mini-Kremlin), $1,000 toward books to fill it, and the rest placed in trust. 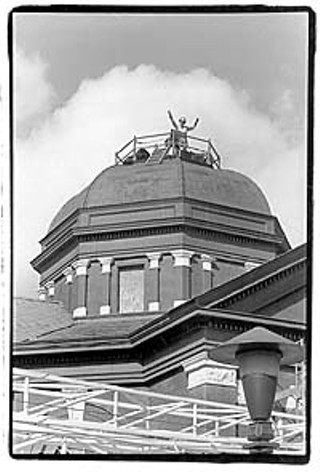 Having held her directorial position for the past 12 years, one would presume Lockhart's top bookworm to be a somewhat typical librarian: organized, quiet, and, above all, sensible. "Typical" could not be further from the truth. Although diminutive in stature, Ms. Laurell smokes like a chimney, emits determination and enthusiasm like a halogen bulb, and seems to possess more nervous energy than a room full of baboons. She is described by her colleagues as "crazy" and by all PR associated with the library's fundraiser as "the loony librarian."

Ms. Laurell had pledged to stay hunkered down on the dome, come rain or shine, until $20,000 had been raised. She was, as she said, "in for the long haul." There was a justified presumption among the onlookers that Ms. Laurell was -- aside from the possibility of being certifiably loony -- some kind of survival expert. It became quickly apparent, however, that this was not the case. In the words of Brenda Playfair, chairperson of the library board, Ms. Laurell's experiences of camping were limited to "having a bath in a hotel suite."

There has been serious concern that allowing a career librarian on the roof of Texas's most historic athenaeum with vague ideas of attaching a tent to its domed roof with little more than good intentions, tent pegs, and a claw hammer may, in fact, aid in its demise. Thankfully, the tent turned out to be freestanding and has been tethered to the railings around the dome for extra security. Felicity Winnett, Lockhart resident, who happens to be Ms. Laurell's daughter, added to the overwhelming evidence, if any were needed, that her mother was indeed not a survival professional. Winnett attested that preparation had consisted of "nothing really, [mother] was more concerned with what she was going to wear" -- a concern that had not been in vain, as Ms. Laurell presented herself to the public in a most alarming fluorescent-pink jump suit, more jewelry than Mr. T, and a golden construction hat.

Although a novice to adventure, Ms. Laurell displayed an uncanny knack for packing the essentials for such an endeavor -- "a sound system, water balloons, and a sling shot." She added, "I've also got two cell phones and my laptop, so I can do my job descriptions, which I've been meaning to do for a while." Food and water will be supplied to her via a cable-and-winch setup that spans the gap between the Masonic Temple and the library dome.

At 10:30am, with the aid of a hydraulic bucket truck supplied by the Lower Colorado River Authority, Ms. Laurell was elevated to her new home. The frenzied crowd cheered her on with raucous chants of "please, don't fall," while simultaneously placing bets on how long she would last. The prevailing thought among onlookers -- belied by their looks of confusion -- was that they didn't have a clue. Judith Marshall, member of the City Council, however, firmly replied "seven days," in light of the $3,200 already raised. She vowed to fib to Ms. Laurell about the amount if the $20,000 was reached sooner. A bright pink "loony" librarian is, after all, a terrific draw and one that needs at least a full week of money-raising exposure.

There was skepticism, however, that total isolation within the confines of a three-person tent would be maintained as, before she left the earth for her rooftop paradise, Ms. Laurell was asked about the logistics of going to the bathroom.

"The great unanswered question!" she replied.

One hopes that the residents of Texas' barbecue capital don't find out the real reason she packed water-balloons and a sling shot. We wish her and the denizens of Lockhart the best of luck.

The Lockhart public library's 24-hour pledge number is 512/398-2960. Donations may also be mailed to: Friends of the Library, PO Box 821, Lockhart, TX, 78644. More information on the library is available at: www.library.ci.lockhart.tx.us. 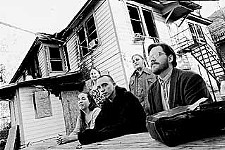