... or What I Learned as an Adult Industry Worker 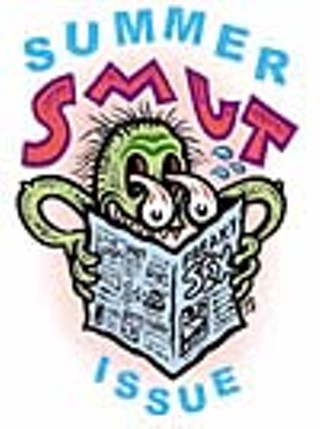 The six months of unemployment had taken its toll. I had become a talk-show addict, a permanent fixture on our living room couch, leaving the house only to trade my food stamps to friends for Slurpee and beer money. This was Austin, when the job market was as tight as the real estate market is today. Unaware of the finer points concerning job supply and demand in Austin's then-erratic economy, I could produce neither job supply nor demand for my services, whatever those were. All I knew is that I was beyond broke. I had reached the point where I was sifting through and pricing my personal belongings. Preparing to sell off bits of my life, I received a phone call about a job application I had filed. Within a five-minute whirlwind conversation, I was hired. Not just anywhere. You see, I was the first girl on my block to land one of the most coveted, high-paying positions that a local business had to offer.

The fact that it was an adult video and books retailer seemed like a minor detail at the time.

So began the story of my time as a worker in the adult industry. Working up to 80 hours a week for those following two years has lent me some perspective on subjects that many have strong feelings about and will not discuss. You know what I call these people? Customers. I have learned some amazing things about people by inadvertently observing sex-shop customers.

The Salad Days: an Education

Given my previous period of unemployment, the heavy demand on my time was no big deal. Everyone I worked with seemed to give themselves over completely to the demands this 24/7 retail work week required. We were never closed. The stores were never empty. I quickly picked up on the fact that this sort of dedication was required to stay employed at this particular business. The money was the hook, the overtime hours unlimited. Besides, hadn't I had enough time off doing nothing better than wearing a groove in our living room sofa?

This was a new experience in an environment I knew very little about. There was a lot to learn over the next few months, and to my surprise, I learned more quickly than expected. I soon found myself able to rattle off the top of my head multiple titles in any given genre of adult film. Some of the genres were completely unknown to me, much to the amusement of some co-workers. I still had a lot to learn.

Here's a short vocabulary list (by genre, with some definitions and film title samples) to help any newcomers:

Amateurs Local or regionally produced, featuring unknown talent. Often encompasses explicit footage shot during annual events, such as Mardi Gras in New Orleans or Hedonism Week in Jamaica, where one might encounter lowered inhibitions. First Time Fuckers is a prime example of this.

Self-explanatory, but a quick point of fact: Any title featuring restraint and beating of an individual on film cannot feature penetration as well. This is a U.S. restriction and does not apply to films shot outside this country. Foreign bondage titles must edit out penetration scenes in order to be featured stateside. Bondage Bitches made it through the censors.

Classics The Seventies produced more than disco, it brought pornography into the mainstream with titles like Deep Throat and Behind the Green Door. 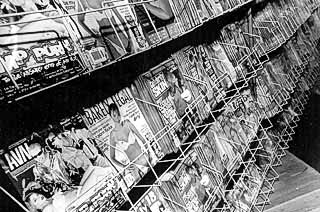 Directors Industry denizens are known either by name and/or by type of action one can expect in their films. Examples: Seymour Butts' (featuring his discovery Shane, now a starlet herself) gonzo series. There is much argument within the industry over who exactly pioneered the gonzo adult filmmaking style. The style features hand-held video cameras recording all action by one or more participants. If Jean-Luc Godard decided to shoot a hard-core movie on video without a script, this is what you might see. Maybe.

Female Ejaculation The thought behind this genre is that the women actually have to have an orgasm in order to ejaculate, therefore the action is real and not acting. I have heard that douching prior to filming has been substituted as ammo for the real thing, so who can say for sure? The Squirters & Gushers series boasts multiple volumes.

Hairy Women Okay, another genre I did not know about. Some guys don't like their babes trimmed or shaved as is the norm for most big-name starlets in the industry. Bushy Babes keeps these types happy.

Interracial Heterosexual sex between black men and white women. This was the combination that dominated this genre, with few titles featuring black women and white men. After all, Black Poles in White Holes doesn't sound as good the other way around ...

Lesbian All girl-on-girl action all the time. Licking Lezzies do indeed.

Latin Heterosexual sex with Latina females, partners vary racially. Coochie Mamas may or may not actually have the line "Coochie, coochie!" in it.

Male/Men All male cast, homosexual sex. If you ask, anyone will tell you that In the Navy is a good example of this.

Older Women Features women past a particular age. The oldest I've seen featured was titled 86 & Still Bangin'!! That was a dark day.

Overweight Women. Self explanatory, I believe. I've Got a Chubby for Chubbies!

Starlets If they were in the straight film industry, we would call them stars. Jenna Jameson, Linda Lovelace, etc. Basically, if you can be remembered by name, then consider yourself a starlet.

Transsexuals Usually pre-operative TS men having sex with other men. As always, there are variations on the theme. My Favorite Trannie.

Penetration in the Centerfold

My everyday life focus shifted dramatically over time. Amusing work-related anecdotes told to friends began to lose their novelty as my limited free time took its social toll. Friends and boyfriends began to drift away as I spent more time bonding over drinks with co-workers. 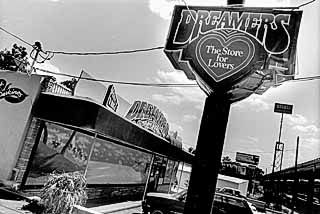 No longer wet behind the ears, I was fully immersed in this work and the industry. I looked forward each month to a new issue of AVN (Adult Video News), the industry trade publication. I would pore over information on new releases, bitchy gossip, and adult toys with enthusiasm and discuss it with customers. I no longer wondered about what my other friends were doing without me in their lives.

If money was the hook that snagged me, then it was my own personal curiosity that reeled me in for the catch. The change over time from the perpetually startled, stammering novice to an informed, title-spouting sex savant had been noticed by others. A rapid series of promotions propelled me to general manager of all stores. I reported directly to the owner and was responsible for all operations and personnel. This gave me all the validation I needed to completely step into the role I was given.

Customers are 99.9% men, hands down. Occasional groups of women come in and huddle around potential bachelorette party favors, whispering and giggling. The rare solo female will make a beeline straight for me to help her. She wants a movie "not like a cheesy adult movie" that she can watch with her husband or boyfriend. I know what she means when she says that: one that actually has a narrative structure, plot-style substance -- then you throw in your hard-core sex. The plot is ridiculous, of course, but at least there is the porno equivalent of visual foreplay compared to the usual assault of jumpy edits of people going at it.

1. Popular female stars are routinely paid thousands of dollars more per feature compared to their male counterparts. A top female starlet also has the opportunity to cash in by going on strip-club tours, doing autograph signings/photo shoots at adult bookstores, and personally endorsing adult products. Centerfold work in the large number of adult publications is yet another source of income available mostly to women in the heterosexual market. Men can up their financial worth in the market by choosing to do gay male porn, but there tends to be little crossover between performers in the genres. That women routinely stand to profit more than men is unusual in any industry, but it's doubly ironic that it happens in an industry that many feel degrades them.

There is a voice inside all of us that directs us through our lives. We have the free will to listen or ignore these inner dialogues. It is a gut feeling -- one's instinct. I chose to ignore mine for most of this period, but still was nagged by an uneasy feeling that continued to grow. I also couldn't shake a subtle yet persistent feeling of sadness for some regular customers of ours. By this point, I knew most of them by name.

They would come in daily, these customers, sometimes several times a day, trading out movies, lingering around the counter, and telling me about their lives. Adult stores and businesses took up so much of their lives that it in fact replaced them. Social interaction, outside of their jobs and the video store, consisted of solitary, detached voyeurism.

Thinking about all of this brought me around to a realization I had not wanted to accept about my life. Although we were on different sides of the counter, we were essentially the same. At some point in our lives, we had allowed something other than significant social interaction to fill up a hollowness that lingered inside. I became greatly disturbed at this thought. I knew at that very moment that I could never walk through those doors again as an employee. I sent my resignation in by fax the next day.

Now, I don't want anyone to think that I'm against the adult industry and its right to exist. That would be far from the truth. I believe there are many entertaining and truly sexy aspects of adult entertainment that can enhance relationships and sex between people. This industry will always shock, titillate, and satisfy as long as the demand exists. The point I want to make is my only real confession as an adult industry worker. What I learned is this: You cannot package, rent, or sell what people really want when they walk into an adult store. And what is it that people are looking for?

Not really all that mind-boggling when you think about it.

Someone once told me that our stores provided a quick fix for people in pain. I believe that this may hold true for some people. The search for light in someone else's eyes may be temporarily settled by distractions, whether it's the frantic job or the flickering, flat images on a glowing screen. I bet some are happy enough with this. Some will pick up and continue to search. Some will succeed.

Then you have those people that maybe just want to get off, I know that. It doesn't all have to be so damned deep.