On the Nature of Particle-Thickened Nasal Mucous ... 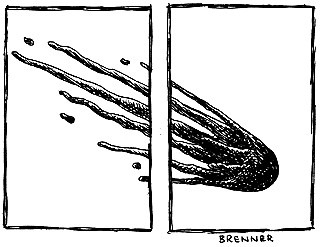 A truly annoying thing about snot is one of the forms it takes. Of course, snot -- or particle-thickened nasal mucous, for the high-toned set -- is a necessary and highly useful defense mechanism in the body's arsenal against disease. It can even come in handy, every now and then, albeit surreptitiously, one hopes, as a means with which to pass the time. (Although, okay, maybe "handy" isn't the right word there. Maybe "fingery" is more precise.) But there is, regarding this base material, at least one aspect that's beyond merely bothersome.

I'm talking about The Flap.

Maybe you don't know it by this name, though. Maybe that's only what I call it. It's when one of your nostrils is inhabited by a hard little flap of snot, a relatively wide micro-sheet of half-dried mucous that's joined to the inside of your nose by a bit of softer, wetter, more pliable snot that forms a sort of hinge there. Like there's this little door, all of a sudden, in your nostril's once-clear threshold.

And, after about a dozen attempts at this sniffing-and-blowing combination, during which attempts you've increased the action's force steadily and drastically, trying to dislodge the unwanted obstruction, and which action you can't seem to simply stop because it's gotten, by this point, to be a sort of personal challenge, nothing's changed. Sniff: Flap in. Blow: Flap out. And then you're wildly contorting your nose until you look like some character in a sci-fi movie right before the hidden alien face bursts out through the perfect human mask, and you're sniffing and you're blowing as with the granddaddy of all facial tics, and still The Flap remains, held tight by its cunning little hinge. 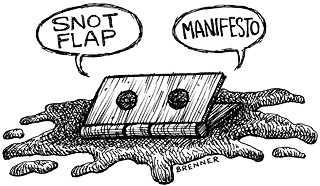 Maddening, to be sure.

And at some point, you either have the wherewithal to simply give up and deal with the constant flapping in and out, or you indulge in a little digital spelunking to accomplish that removal. Or, if you've become really hard-core about the situation and you're refusing to kowtow to The Flap, if you're not going to let it get the better of you because, by God, you'll show it just who's in charge here; it's not the boss of you, etc ... If you've reached the place where your sniffing-and-blowing technique has emotionally codified to the status of vendetta, you'll do Something Else. You'll sniff in, once, to get The Flap flapped IN. Then you'll use a finger to block the opposite nostril closed. Then you'll blow out one last time -- full gale force.

Which will most likely rip that hinge from its mucoid grasp upon the inner wall of your nostril and send The Flap whizzing like an olive-green bullet from the moist barrel of your snout.

This is not something you want to do in anything other than perfect privacy. And, in any case, you want to remember to keep an eye on The Flying Flap -- so you can remove it from wherever it happens to hit and, need I say, stick. But sometimes that little pilgrim goes so fast you just can't track its progress. At which point it helps to remember whatever rudiments of ballistics you may have gleaned from old episodes of Magnum P.I. or Matlock. That way you'll be able -- by considering your position relative to your surroundings, and the angle of your nose at the time of departure, and the relative wind speed and direction -- to plot its likely trajectory. And then it's simply a matter of search and seizure. Unless you're in a public place and prefer to leave that task to the unfortunate janitor. Which would, actually, be a fitting fate for that worthy.

Janitors are called janitors, you see, after the Roman god Janus. Janus had two faces -- one in the front and one in the back -- and he was so arranged in order to best perform his duties, in order to see people approaching from either side. This was important because Janus was the official Guardian of Doorways. And when you're the Guardian of Doorways, it just makes sense that you're familiar with things that have, well, hinges to them. Which would put those hinged things well within your particular Sphere of Responsibility, wouldn't it?

A little rationalization, like a well-blown Flap, can go a long way.

And you may think that's funny, but it's not.