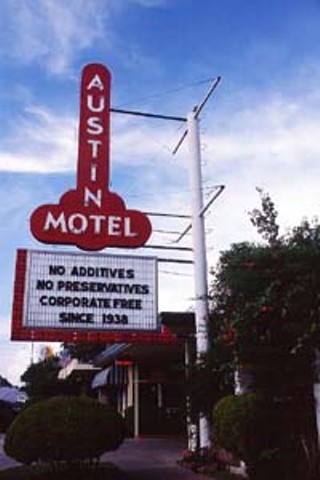 Dottye Dean never thought she'd come back to her native Texas to live, but her parents' dream and livelihood, the old Austin Motel tourist court, had slipped into a nightmare of disrepair and delinquence. A successful opera singer on the West Coast, Dean couldn't stand to see her parents' two decades of hard work and love for the old tourist court evaporate in a cloud of seedy drug deals and red-light raunchiness. So she decided to make the Austin motor court her pet project. One look at her resplendent renovation reveals -- as clichéd as it sounds -- a labor of love.

The original Austin Motel sign remains one of the avenue's boldest icons and has endured many a Freudian punchline for its rocket-red, sky-thrusting shape. But that's how things were designed back in the motel's day -- sleek, modern, space-age. Today, the Austin is an urban landmark, and owner Dottye Dean has created a comforting reminder of a time gone by.

You won't find one stick of stock motel furniture in the Austin. Each of the 41 rooms is individually designed: breezy décor complemented by white wicker in one suite might be neighbor to an antique haven grounded in solid maple in the next. The Executive Suites are the motel's centerpieces, featuring Saltillo tile, cedar-wrapped beams, and cozy Jacuzzis for two. The front half of the hotel is comprised of larger rooms and suites, most with amenities like fridges and microwaves. The back half of the motel is a wonderland of different subtly themed rooms, with motifs ranging from the tropics to the mountains, Italy to the Far East, and Monet to Mancini. My personal fave is the "Americana Room" featuring the original wild bicentennial-era red, white, and blue wallpaper.

Lounging in one of the white metal patio chairs by the crystal-clear, kidney-shaped pool, it's easy to get lost in a different time -- a time when big-finned chrome monsters whizzed by on their way to San Antone. Time seems to move a little more slowly at the Austin, and it's good to know that that kind of experience can be had just across the river on Congress.