The Beat of a Different Scanner 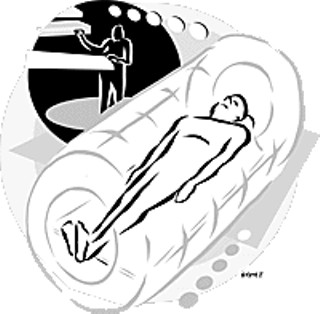 It was like being inserted headfirst into a giant, white cigar tube and having minimalist techno music hammered over my entire body. If robots were born and not made, it would be what a robot fetus experienced in the womb -- if the robot's mother was a bipolar drum machine stuck in manic phase.

It lasted almost an hour, it cost over $1,000 and proved -- ultimately and thankfully -- an unnecessary diversion.

I needed it because I'd done something weird to my back. Through improper lifting techniques malpracticed upon several large shipments of paper, by getting less than some RDA of regular and back-specific exercise, from sleeping in weird positions upon double-decker frameless futons so ancient that the floorward sides were beginning to decay, and due to being much less young than I was before I started, uh, decaying myself. Whatever weird thing I'd done, it was also painful. Scarily so: After a few days, even breathing too deeply was a crash course in agony.

I went to a doctor. I went to several doctors. They poked me, they prodded me, they tested this flexor and that extensor, they had me walk (painfully) and turn (ditto) and bend (ibid), they asked me to tell them the capital of Nebraska (Omaha). Eventually, these expensively degree'd medicos steered me to an outlet of the Austin Radiological Association, so that my condition -- which appeared merely compromised but might be way fucked -- could be fully ascertained. With MRI.

Magnetic resonance is a phenomenon discovered in 1946. Turns out that the combination of a strong magnetic field and certain radio waves will interact with the hydrogen protons in the human body, and that interaction can be measured. Those measurements can then be translated into images that, these days, exceed any other method in quality and clarity. The first clinical use of MRI, we're told, took place at Nottingham University Hospital in England in 1967. My first personal involvement with MRI took place at the ARA in Austin, Texas, in 1999.

Now, I realize that that sounds like sarcasm. But I'm serious here. When I talk about techno music pum-pum-pummeling my corpus while I'm stretched out in a giant cigar tube, I'm talking about what was, for me, a pleasurable experience. I like techno music. I enjoy close quarters: They're such a fine bulwark against the sociophobic tendencies that keep me from enjoying any music in the midst of packed crowds. And the bright light of the unit's interior, the hard, white plastic of that temporary coffin, the idea that some heavy-duty scanning of my insides was going on via orchestrated waveforms that my senses couldn't even detect?

It was Rammstein, I imagined as I lay there. All the members of Rammstein were standing in the room surrounding the scanning unit and its Brenner-engulfing hole. They were gathered around the machine and -- rhythmically, with extreme precision -- pounding the shit out of it with chamois-covered sledgehammers.

This made perfect sense, I thought, considering the visuals attached to their recent album Sehnsucht: portraits of the band by Gottfried Helnwein, the brilliant German artist whose gauze-wrapped and fork-embellished self-portrait had been an album cover for the Scorpions -- you know the one I'm talking about? Helnwein had photographed the Rammstein faces after mangling and compromising them with arcane medical apparatus; and here I was, with my back mangled and compromised, being photographed by arcane medical apparatus! How very synchronistic it all was! Why, Helnwein was probably out there right now, conducting the band in their concerted hammerstrikes, perhaps even forming a mini mosh pit with my wife or discussing the finer points of arcane medical apparatus-based face-mangling with the MRI tech! Of course! And there were streamers, too! Multicolored streamers that descended from the antiseptic rafters and twisted and shimmered like silken snakes dancing in time to the music ...

Well, I never squeezed the bulb. I never even thought about squeezing the bulb. I didn't want the goddam bulb, do you understand? What I wanted was a volume control. I wanted to turn it up.

But, too soon, the show was over. The drumming ceased; the lights shut off. The technician, with the efficiency of a good pizza chef, slid me out of the imaging machine.

I raised my head a bit, looked around.

Where had all the streamers gone?

I climbed gingerly off the thin table. My wife set down the magazine she'd been perusing and helped me hobble out of the room. A certain thumpa-thumpa-thump still echoing in my skull. A certain amount of removal still lingering from the Darvocets I'd popped earlier. A certain dread of Oh Christ, What have they found? That I have a strangulated hernia or somesuch? That it's cancer of the spinal thingamawhozis?

The tech did a preliminary look-see at the magnetographs of my spine and my spine's interior, then forwarded the images to one of the earlier docs.

It turned out to be sprained back muscles.

After all the testing and prodding and poking and thumpa-thumpa-thump, after all the missed employment time, after so many nights of bad dreams in which I ended up like Christopher "You'll Believe a Man Can Turn His Head Slightly To The Left" Reeve, it turned out that I was beset by nothing worse than muscles strained beyond endurance. Much like my financial standing, despite the buffering of health insurance.

But now I've completely recovered from the back; and am almost finished recovering from the debt. And I also have, for the trouble, a cherished memory of my own personal and skin-close techno concert, possibly performed live by Rammstein, courtesy of the good folks at the Austin Radiological Association.

In MRI, the strength of the transmitted magnetic energy is proportional to the number of hydrogen protons in the tissue, you see. And signal strength is modified by the properties of each proton's micro environment, such as its mobility and the local homogeneity of the magnetic field.

That's what they say, anyway.

You know what I say? I say: Let it rock!