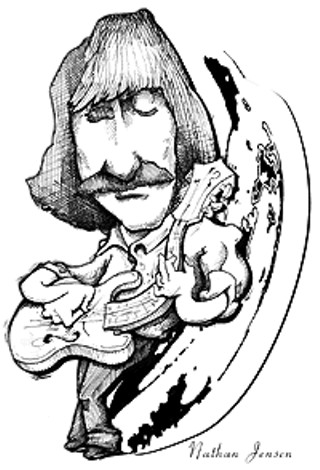 There was a whole fistful of picks he could've chosen from. I stretched out my eager hand to reveal my entire collection of tortoise Fender picks, black Gibson ones, and psychedelic no-names. He zeroed in on one particular pink jobbie and delicately lifted it out of my palm. "Ooh, pink! I'll take this one!" Sterling grinned wildly as he picked up the SG, sat on the bed, and began strumming. It seemed ironic, backward even -- that Sterling would be as giddy to play this modest Firebrand Gibson as I would be if one of my guitar mentors, like say, Holmes Sterling Morrison, let me play one of his sacred guitars.

The SG hummed and bucked. It seemed the Gibson company had carved this particular model just for him. The walnut body of the almost symmetrical, dual-horned guitar fit him to a tee. Some men look better than others behind a guitar, and Sterling Morrison could have been a Gibson cover boy. He slid into the intro of "I Can't Stand It," and I was lost. I imagined his lanky figure framed against the wail and fury of the original mid-Sixties Velvet Underground and Exploding Plastic Inevitable. I could just see it: his straight hair grown out a bit, accented by the facial hair of the day, colorful morphing images casting shadows on his stern features, his lean body a calm harbor in the ensuing frenzy; Gerard Malanga and Mary Woronov creating a cyclone of erotic terror with their whip dance; black-clad Lou looking fierce and frightened and in need of a fix; Cale executing his viola, and Moe pounding away on that sideways bass drum. The VU in their heyday; there wasn't much visually to go by back in 1985 -- a few pictures and videos of that wild period. But hearing those familiar churning runs at the hands of the man who originally played them made it all seem real.

He stopped suddenly; 1985 screamed back into reality, and I saw Sterling smirk.

"The SG's the greatest guitar ever made," he said reverentially, as his huge left mitt gently walked up and down the neck in alternating lead and rhythm formations, his right hand sweeping across the body, damping the strings, his long spine seemingly curved over the Gibson body. He backpedaled a bit and wistfully recalled some other fine models that he owned and had played, but I missed most of that part as I was so transfixed -- adoring the fact that Sterling and I shared a certain guitar fetish. "Pale Blue Eyes," "Femme Fatale," "What Goes On," he would run through a verse and chorus, or sometimes a whole song, then stop to talk about guitars some more.

The Gibson SG is magic. Rhythm players especially know this: Its broad yet slim neck, easy action, and body shape are all conducive to fast, hard playing. And Sterling played fast. It was Sterling's fast, fast, almost triple-time strum and nestled interplay against bandmate Lou Reed that cinched me as a VU fan -- me and a skadillion other Velvet-influenced indie kids in the mid-Eighties.

Early on in my "career" as a guitarist, I had decided that I was strictly a rhythm player, with no interest in stepping out to play lead. More accurately, this was decided for me by a combination of my spazzy, hyperventilating nature, lack of mathematical focus, and the advice of Rick Rosanno, a Florida guitarist I admired who once told me to "absolutely not learn anything else on the guitar." He said that my style was unique and strictly mine, and that if I learned a "bunch of noodley lead shit" that I would busy up what was already a fast and loose style. Whether he meant this as a compliment or not, I took it as license to not practice or develop any more skills. Plus, I had always loved the underdoggy role of second fiddles in bands, whether they be lead or rhythm players. I wanted to be Pete Townshend, not Roger Daltry, Mike Nesmith, not Davy Jones, Nancy, not Ann, Wilson.

My husband at the time and I ran the Velvet Underground Appreciation Society from our house in Stuart, Florida. He was a "manic-obsessive" for the VU, as friends would joke. He had seen the Velvets as a 16-year-old boy; they changed his life forever. His involvement with the fan club was his life. My appreciation was as sincere, just not as all-consuming. My main connection to the VU was music, that rhythm: the Sterling Morrison sound.

Now the whole world was approximating that very same rhythm, and many modern combos professed Sterling and the VU crew as sonic mentors. Most of my favorite bands at the time, the Feelies, Shop Assistants, Sonic Youth, the Smiths, R.E.M., at least touched on that strum. Even today, Sterling's unique sound has carried on.

Sterling's mom lived in the next town over, Jensen Beach. She worked at the local animal shelter's thrift store, and when we'd shop, we'd stop and say, "Hi." Once, when my husband was clearing out a closet (probably to make room for more Velvets crap), he donated the black Japanese trenchcoat my mother carried me in during her pregnancy. I made him go to Sterling's mom and buy it back. She was very nice about the whole ordeal and didn't charge us.

When Sterling would come up from Austin and later Houston to visit his mom, he would call us up to get together. We had many crazy, fun times with Sterling, and anyone who knew him -- as many in Austin did -- can testify to his charmingly erratic and unpredictable entertainment value as a chum. One night, we played pool at one of the few rock "venues" in the teeny little conservative burg, and I got pulled over for drunk driving despite not having had a drink in months. Once, we took Sterling, Martha, and Maryanne to Disney World, and en route, at a pre-theme park stop at some scary place like Sambo's or Denny's, Sterling displayed a habit Moe Tucker had warned me about. If you are the type of person who saves something on your plate for last, she told me, don't do it around Sterling. He'll reach over and grab it and somehow get the words "You didn't want that did you?" out of his mouth full of your crunchy french fries before you even realize that your food has been pilfered.

By 1990, when my now-ex and I decided to move to Austin, Gail's house in Houston became a regular stopover on trips across from Florida. Sterling and I always talked guitar shop, and it later occurred to me that even though I experienced amazingly little sexism as a "girl" guitarist, that Sterling was the one man who took me most seriously about playing, or at least made me feel like he did. He became my guitar guru, telling me to wire the mighty SG for stereo and to take out that lame plastic nut and put on a nickel or brass one so that the strings would resonate sweetly. He later confirmed that that was how he had rigged one of his guitars, and that it would probably be tough for me to acquire two Sun amps to flesh out the effect, but if I could, I should. He also offered some insight into other personalities in the VU. And despite his penchant for bluntness and downright orneryness, he showed remarkable restraint and even kindness when talking to me about Lou and other open, festering wounds in his life. This of course, was not the case when he and I were not one-on-one. In a group of three or more, he was as direct and abrasive and as informed and opinionated as ever.

Despite many fond, silly memories of my brief and few times with Sterling Morrison, it is that first visit that'll remain burned in my heart forever.

Sterling put down my guitar and asked if he could keep the hot pink pick I handled him along with the SG. "Take as many as you want, Sterling," I eagerly chirped. "Nah, thanks! This one's special ... do you mind if I keep it?" I smiled back. He stuck the pink pick in his pocket and put the guitar down.

Chronicle Features editor Kate Messer now wishes she had invited Sterling to come to Austin to see Power Snatch, the band she played with in the mid-1990s. She thinks he might've dug it.