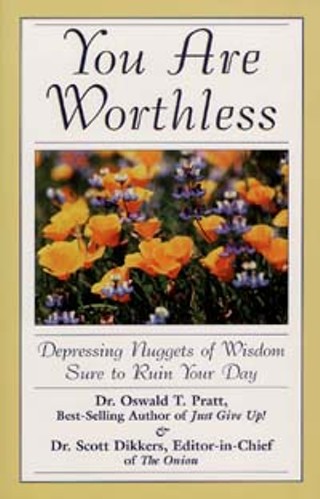 Depressing Nuggets of Wisdom Sure to Ruin Your Day

Finally! A self-help book with the vinegar and grit to tell it like it is. Enough with the mollycoddling of all those weak-willed dreamers who mewl and whimper about how mistreated they are, who can't get their own shit together so they seek out pathetic scraps of self-esteem in the vapid, inane, artificially sincere blatherings of some self-anointed "guru" of personal contentedness. This whole "inspirational" book racket does nothing for these sorry-ass sad sacks except encourage their pitiable delusions that they're "OK" and that they have an ice cube's chance in hell of finding a shred of happiness in life. C'mon, people! This world is a vale of tears, a sweatshop, a charnel house, crammed with nothing but liars, cheats, and frauds out to get to the front of the line and grind you into the dirt in the process, and the sooner everybody realizes that, the sooner we can all go back to nursing our beers and muttering bitterly to ourselves without fear of interruption.

That's why You Are Worthless is such a breath of fresh air (or would be if there really were such a thing in our soot-choked excuse for an atmosphere): Dr. Pratt knows precisely what a waste this godforsaken existence of ours is and isn't afraid to spell it out for all the great big blubbering babies out there who just don't get it. He lays it on the line right there in the chapter titles: "Your Worthless Self," "Your Good-for-Nothing Friends," "All the Other Idiots," "The Goddamned Kids," "The Nightmare That Is Love," "Your Faith: What Has It Ever Brought You But Grief?" There, don't you already feel that phony veneer of individual value and social merit you so wretchedly cling to beginning to blacken and slide off? Ah, but that's soft-pedaling it compared to the savage hatchet job on your ego Pratt provides in the raw, rancid meat of the book. "You're not that good-looking," goes a depressing nugget of wisdom in Chapter One. "Boy, you're really screwed up," goes another. And a third weighs in with "I would be willing to wager that at some point your mother was holding you, looking at you, and saying to herself, "What was I thinking?'" With body blows like those, even the most clueless of boobs would find it difficult to sustain that little flicker of hope inside that anything they do matters. To anyone.

And that's just a handful of the bleak, dismal truths included here! Pratt includes dozens more, covering every conceivable aspect of your dreary, dreadful life, from the people you hang out with ("Your friends say they like you, but really they only like how they feel around you. You barely figure into the equation at all.") to your children ("No one else in this society is particularly grateful to you for bringing those rotten kids into the world.") to your career ("Perhaps if you wear shiny shoes to work, no one will notice that you're an incompetent loser."). Really, if you're not a quivering, sniveling blob of misery after finishing this book, well, there's something wrong with you.

But then, there's something wrong with you anyway, isn't there? Sure there is, otherwise you wouldn't be sitting here reading this crappy little review at some cafe where they charge too much and never bring you the right thing anyway, or sitting on the bus, surrounded by a crowd of equally miserable drones and misfits, or in whatever vermin-infested hole you live in. You'd be out doing something, like climbing Mount Everest or piloting the space shuttle or finding a cure for cancer. Face it: You are worthless.

You Are Worthless co-author Scott Dickers is one of the guiding lights behind The Onion parodic newsweekly.