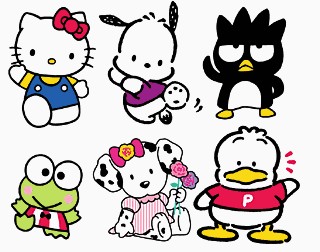 Despite my Hello Kitty fixation (Did you know that Hello Kitty lives in London?), even I am forced to admit that there are other inhabitants in the Sanrio Universe. Designed to appeal to Sanrio's core 9-13 year old customers, each of these characters created by the Japanese toy giant are just as important in their universe as Hello Kitty is in mine. Like soap operas, the Sanrio Universe is populated by subsidiary characters who revolve around the main character.

Pochacco, meaning "chubby," is a sports-minded pup. He looks a little bit like a zippy Japanese Snoopy. He is often pictured running after a soccer ball, with his floppy ears following behind him. This vegetarian canine is described as the most popular character after Kitty by the Highland Mall Sanrio store sales staff.

Badtz Maru (Bad and Good) is a mischievous little penguin living in Gorgeoustown with his pinball-playing father. A favorite among boys and older girls, Badtz Maru is easily the bad boy of the Sanrio world. His hooded eyelids and seeming scowl make him look a little like a penguin James Dean. If Sanrioland has a transgressor, an "other," it's Badtz Maru. Usually Badtz's products come in black or silver, and have more of a modern, techno look to them.

Keroppi currently resides with his family in a big house on the edge of Donut Pond, the largest and bluest pond around. This is good, as his career in Sanrioland appears to be on a downward slope. The frog used to be the second-most popular figure next to Kitty, but his popularity is waning. If he was a Hollywood actor, it would be time to hit Betty Ford and find a comeback vehicle. Not quite condemned to the "where are they now" files -- but definitely headed for Vegas.

Spottie Dottie This winning Dalmatian pup is a New York City fashion expert. She wants to look her best, and she wants to make sure her friends do as well. She's often seen with either a pink bow or a pair of sunglasses.

Ahiro No Pekkle "Pekkle the Duck" is an Australian wannabe lifeguard who has a little trouble with his swimming. He's a laid-back duck described as loyal to his friends. His love of dancing makes him Sanrio's answer to John Travolta in Saturday Night Fever. Think of him as the disco duck.

Sanrio has been around since 1960, and the older items can fetch big bucks. A vintage Hello Kitty telephone offered recently by Austin's Hogwild toy shop was auctioned off for around $600.

This month, to celebrate her big 25th birthday, Hello Kitty is going on a world tour, and is having a photo contest to celebrate! Details should be available in the November issue of Seventeen.