This Essay for Entertainment Purposes Only ... 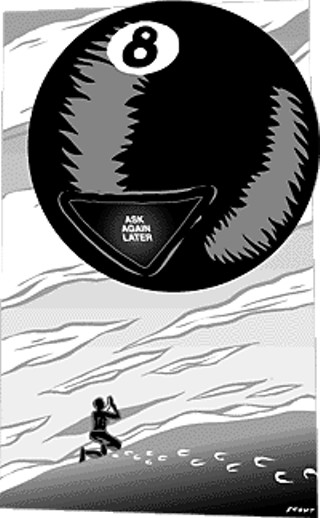 Imagine how children across America will feel when they discover that one of their most enduring and popular toys is actually a tool of the occult! We're not talking about the Ouija board, despite that demonic diversion's frequent place as fodder for fundamentalist Sunday morning rants. No, the real stealthy tool of Satan is a palm-sized black plastic sphere with 20 possible different answers to life's most mysterious questions (so long as they are asked in a yes-or-no form). Is there any other way to explain an implement of such magnitude?

The reason the Magic 8 Ball is an occult power tool, in my humble opinion, is that it says it isn't. This type of childlike logic always inspires the suspicion that whatever someone is making the effort to deny must be true (i.e.: "Clinton's impeachment trial was not about sex!"). The small black oracle's packaging reads, "Magic 8 Ball to be used for entertainment purposes only."

Right. When I asked the Magic 8 Ball if it was a tool of the devil, it answered, "It is certain."

What more proof do you need?

The Magic 8 Ball is an object of worship. Invented 50 years ago, it has spawned such Internet sites as The Magic 8 Ball Autopsy, The Talking Kurt Cobain Magic 8 Ball Site, and The Smoking Head of Bob (which served as a Magic 8 Ball site until the friendly folks at Tyco sent a cease & desist letter).

The fact that the Magic 8 Ball is at its core an eight ball conjures up the phrase, "Behind the eight ball," a term used to refer to someone who is at such a disadvantage that they are almost cursed. And if the link between curse and demonic tool isn't clear enough for you, it's time for that remedial occult class.

obsession begin when I was -- eight. It was a gift from my mother, a conservative Baptist lady who spent years writing the White House trying to convince President Bush that Halloween ought to be abolished on religious grounds. Little did she know of the innocent Magic 8 Ball's powers; its influence worked even on her. Now, that's stealth.

Oh, my relationship with the ball of magic proceeded amicably enough. I consulted it whenever I needed. Elementary school dilemmas such as "Will I have a pop quiz on the state capitals tomorrow?" seemed like just the sort of probing life question that the ball could handle. Unfortunately, the "Don't count on it," answer lulled me into a false sense of security. So began my downward academic spiral. Thank you, Magic 8 Ball. I still, to this day, do not know the capital of Idaho.

As I grew older the questions begin to be more, er, personal in nature. Would I get invited to a party? Would the blond-haired, blue-eyed, captain of the seventh-grade football team ever ask me out? The fact that I never got the answer I wanted never seemed to be a problem. It was the act of asking -- the shaking and the hoping -- that suspended dreary reality. In junior high, an especially sucky period, I went through six of the damn things. Consumer tip: Throwing them across the room does not constitute shaking.

Despite my emotional dependence on the trusty round oracle with the mysterious blue liquid, I do not currently own a Magic 8 Ball. I don't need that kind of temptation in my life. I'm bad enough without having one in my house. I can be caught surreptitiously checking them out: A sneaky sashay to the toy aisle when I get my oil changed at Wal-Mart, or a quick trip to Urban Outfitters during lunch. Those stolen glances at the ball give me the thrill of illicit occult activity without any of the risk.

I thought for sure I was the only person in the world with this particular toy problem. Not so. The New Year's Eve party I went to last year was at the home of a fellow Magic 8 Baller. Out of habit, I picked it up and checked the outlook for '99. "Will I hear that #@!!$%* Prince song more than 1999 times this year?" I asked the brave little ball. Just as the foamy bubbles from my too-vigorous shaking began to recede, the ball was jerked out of my hands. A room full of twentysomething professionals became a room full of junior high girls snatching at the prize, squealing, "Oh, Oh, Let Me! Let Me!" Tellingly, one of the squealers was on the lucrative end of the mental health field.

A legislative aide wanted to know if he was going to get lucky during session. "Better not tell you now" was the reply. Then a UT graduate student wanted to know if she was going to get lucky before the start of the semester. The questions were coming fast and furious, and the poor Magic 8 couldn't keep up. The bubbly blue chemical froth made it impossible to see the answers. So someone whipped a miniature key chain Magic 8 Ball out of a pocket. Still warm from its original owner, we shook it and tried to read the teeny, tiny printing on the inside of the ball. Alas, our eyes were far too old for such small letters. We strained to see. What a surprise to realize that the questions of the Magic 8 Ball were exactly the same questions asked of 8 Ball back when I was a kid. We were still obsessed with sex.

The folks at Mattel (who purchased original 8 Ball purveyors, Tyco) must have realized that many of the questions asked of the psychic sphere are about possible romantic entanglements. They now produce and market an "Electronic Magic 8 Ball Date Ball." Packed in hot pink, the ball is "The ultimate fortuneteller just for girls," thus reinforcing the skewed worldview of Seventeen magazine. This electronic version with 88 different answers offers similar insight as the original's smarmy swami declarations, but with vague variations: "I think yes," "Cannot predict now," "Good chance," "Still thinking," etc.

The disappointing thing about this electronic fortune teller is that it doesn't need shaking. To get a response, one presses a button on the top which triggers the little ball into playing a tune while heart-shaped graphics precede letters which dribble out an electronic answer. The display works like one of those annoying message boards where words move from right to left, revealing only one or two at a time. In their efforts to ring high-tech bells and blow LED whistles, Mattel forgot the shake. The lack of shaking make the ball's answer somehow less personal and less authoritative. As in homeopathic medicine, shaking gives the ball the necessary energy to complete its task. Without the shaking, the ball's answer is an enervated electronic entity.

For those who find the peppy, almost positive response of the classic Magic 8 Ball too cloying, there is now "The Sarcastic Ball," made by Archie McPhee's Accoutrements. "It tells it like it is," says the label. When asked a question such as "Will our three-year-old Dalmatian ever stop peeing on the carpet?" the Sarcastic Ball answers "Yeah, and I'm the Pope." The Electronic Magic 8 Ball offers, "Maybe." Sadly, it must be acknowledged: The Sarcastic Ball comes a lot closer to the truth.

From the same folks who brought you The Sarcastic Ball, there's also "Madame Zelda's Crystal Ball," which glows in the dark and features a giant, disquieting eye on the top. It has somewhat updated colloquialisms in place of the classic Magic 8 Ball responses: "No doubt about it," "So it shall be," "Cannot foretell now." Yet these variations have nowhere reached the market penetration of the original.

It seems that everyone has played with the Magic 8 Ball at one time. An informal survey of former Magic 8 Ball users revealed that many felt a sense of empty disappointment following their consultation with the ball. After all, when people go to the trouble of seeking out an oracle, they want the oracle to be right. Or at least have a clue. As a traumatic sixth-grade experience with the Tarot card reader at the Halloween church carnival taught me, people don't want to have their fortunes told by a sixth-grader out past curfew. And they don't want to pay for the privilege. The clerk at the hip discount store offered little condolence, "They're not really accurate. But it's better than spending your money on the psychic hotline."

As to what this really means? "Better not tell you now."