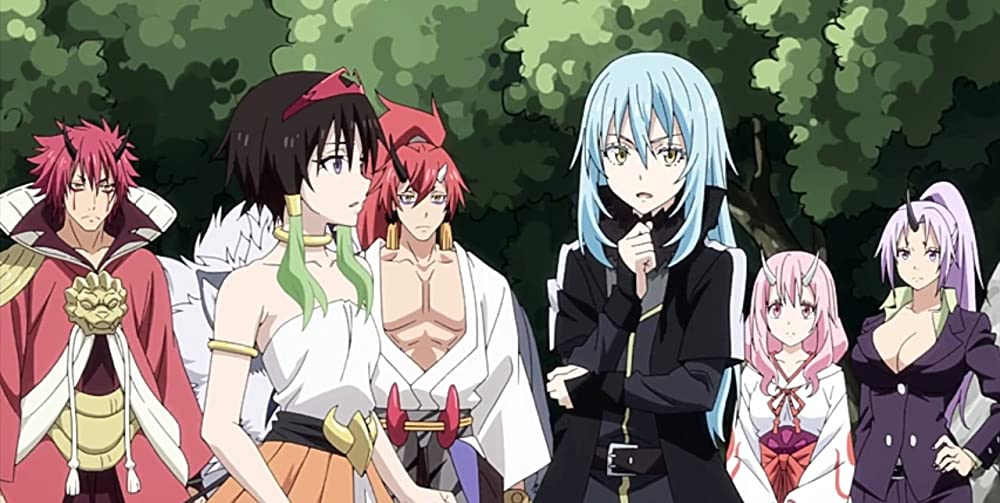 That Time I Got Reincarnated as a Slime the Movie: Scarlet Bond

Why would an anime make the transition from series to film? Sometimes to take advantage of scale, sometimes to tell an out-of-canon tale that doesn't fit in a linear way to core continuity, and sometimes, as in the recently released wrap-up to the two-season The Quintessential Quintuplets series, because the narrative works better as a feature than as episodes. All of which raises a core question: How accessible do you make the movie to first-time audiences?

In the case of the unbelievably wordy high fantasy That Time I Got Reincarnated as a Slime the Movie: Scarlet Bond, the answer is "not at all."

After all, the original light novels start off in the most bizarre fashion, with a 37-year-old Japanese salaryman called Satoru being murdered and then reincarnated in a Dungeons & Dragons-influenced world as a sentient ball of slime called Rimuru (voiced by Okasaki in the Japanese original and Brittney Karbowski in the English-language dub). That was the beginning of season 1, and since then Rimuru has become the shape-shifting lord of a magical kingdom who is best friends with a giant dragon who can also change shape, and hangs around with a coterie of attractive trolls, dryads, and demon lords in tight-fitting outfits while lazily solving political intrigues.

If you found yourself blinking a lot during that explanation, then Scarlet Bond is definitely not for you. But then, beyond familiarity with the franchise, this may not be the most rewarding experience for long-term fans either. Between clumsy comedy (ho-ho, Rimiru's secretary Shion can't cook); an airless script about the mystery of who is poisoning Queen Towa (Fukumoto/Cherami Leigh), monarch of a neighboring country; and a Dragonball-level dedication to cramming in cameos for every single recurrent background character, Scarlet Bond might have been better as a season. Maybe then the introduction of wandering handsome swordsman/ogre Hiiro (Uchida/Jonah Scott) might have been given enough space to justify making him the central character, but instead he just seems as cardboard and two-dimensional as the cackling schemers behind the plot against Towa.

Worst, Scarlet Bond collapses into the hourlong, supposedly epic but ultimately low-stakes multifront battle de rigueur in too much anime right now. That leaves no room to explore the story's most interesting character: Rimiru himself. Rather than tell the standard fish-out-of-water aspirational fantasy tale, Slime creator Fuse has created a fantasy realm where the smartest guy, armed with real-world smarts, is in charge. It's like putting Tyrion Lannister on the Iron Throne, then just having him pop up occasionally to spout exposition. The animators are more fascinated by Hiiro's bland persona and his absurd pecs. Next time, more slime. That Time I Got Reincarnated as a Slime the Movie: Scarlet Bond, Yasuhito Kikuchi