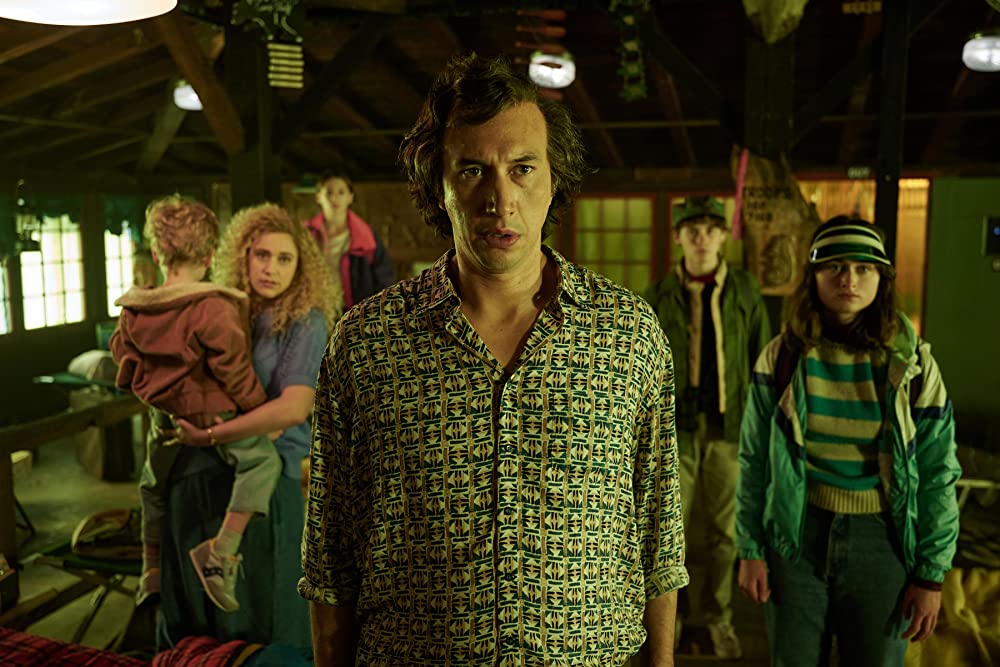 In modern usage, there has yet to emerge a mainstream successor to postmodernity. Sure, post-postmodernism is a logical stopgap, but feels a bit lazy, no? Postmillennialism is a little too on the nose, and hyperhybridism sounds like some adverse condition of electric car owners. No consensus there, unfortunately, but I think we can all agree that postmodernism is strictly for the history books, man, like totally nowheresville. Which means it’s a perfect time for nostalgia, a perfect time to take a look back at those early, halcyon days when we were only beginning to be helplessly cut off from experience, when the anxiety of disaster and conspicuous consumption were new and exciting feelings of everyday life. A return to the 1980s, naturally, and the world of Noah Baumbach’s ambitious, hilarious, but ultimately uneven White Noise, a film nestled somewhere between "fever-dream period piece" and "villain origin story," the villain here being either modern society itself or late-stage capitalism, take your pick (but why not both?).

White Noise is based on the seminal 1985 novel by Don DeLillo, an author with the uncanny knack to see the future. DeLillo comes from a long line of novelists as cultural theorists, and his book is a scathing critique of, among other things, academia, the nuclear family, and the underlying dread of death and calamity. It’s also one of the funniest novels of the 20th century. DeLillo’s style, a mismatch of tonal understatement and the absurdity of an event, is basically the de rigueur of contemporary comedy, and Baumbach harnesses that style to great effect for much of his adaptation. Jack Gladney (Driver), an esteemed Midwest college professor specializing in Hitler studies, and his wife, Babette (Gerwig), are just trying to raise their four children and live out the American dream in their Spielbergian suburban microcosm. All of Jack’s children – teens Heinrich (Sam Nivola), Denise (Raffey Cassidy), and Steffie (May Nivola) – come from different ex-wives, with toddler Wilder being the latest addition, courtesy of Babette, to this blended family. But this erosion (evolution?) of the institution of marriage is perfectly fine. What’s not so fine is Babette sneaking an ever-increasing amount of little white pills and the subsequent memory loss they’re provoking. And what’s not fine at all, not one bit, is the toxic gas cloud forming in the air, the result of an unfortunate marriage between freight train and tanker truck.

No stranger to depicting the complicated lives of deeply flawed intellectuals and the people who love them (see The Squid and the Whale, Margot at the Wedding, et al.), Baumbach has expanded his palette here to include car chases, dance numbers, and massive special effects (although credit where credit’s due: Cinematographer Lol Crawley deserves every award he has picked up on the festival circuit and then some). Most of the film hums along smoothly with a breezy pace that belies the sheer density of the dialogue – detached, self-aware, and yet vibrant, alive. The cross-talking in White Noise hasn’t been heard in cinema since the heyday of Robert Altman, four or five characters overlapping each other at once, but that’s the point, isn’t it? We’re all just talking past each other.

But Baumbach struggles to harness a balance of tone, or at least a facsimile of it, with the freewheeling-ness of it all. It’s like watching an Olympic gymnast perform a near-flawless routine, only to land on shaky footing a time or two, eliciting the sympathetic “Oh!” reaction from the crowd. Here, forays into broad comedy and slapstick falter, drawing attention in all the wrong ways, and the crescendo of the second act makes way for a muted ending, and as with that gymnast’s performance, it’s the mistakes that linger. Still, the entire cast is pitch-perfect, everyone inhabiting their roles with an expert ease. Cassidy and Sam Nivola as the two elder Gladney offspring are the secret weapons in this unabashed labor of love, embodying the paranoid skepticism and trivial knowledge that’re now innate qualities, as the background hums with that titular substatic. And while it may seem quaint to consider today, there was once a place of solace, away from the unraveling randomness of it all. Beyond the banality, this place whispered of a spiritual presence, hinted at the divine. A wonderful oasis called the supermarket.