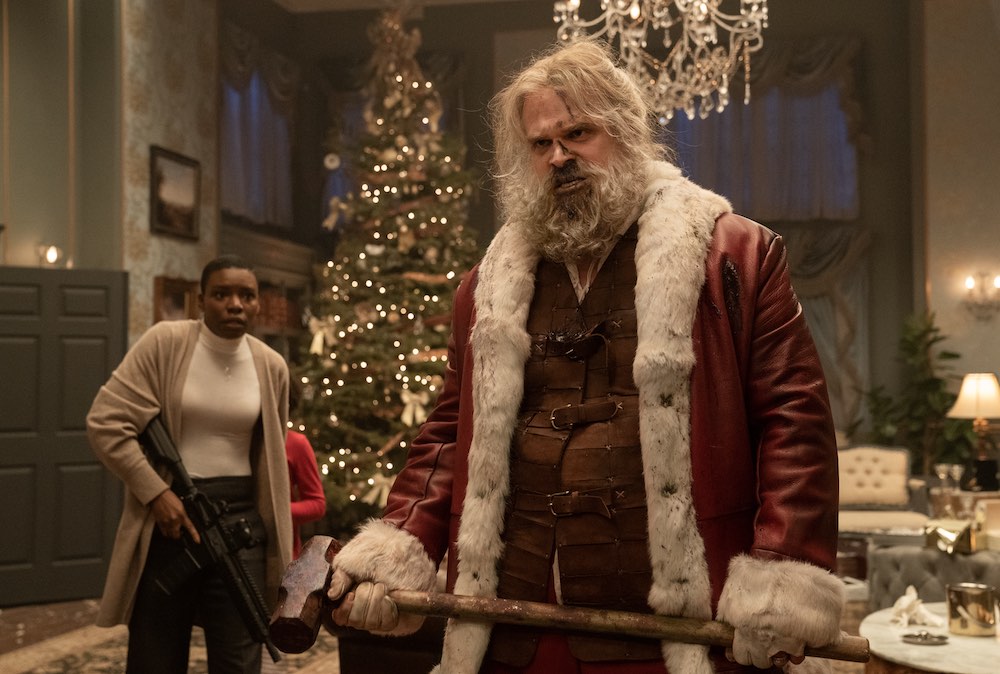 Given the endless permutations of holiday movies and John Wick clones, perhaps it was only a matter of time before someone dreamed up a hyperviolent Christmas movie. But a hyperviolent Christmas movie where Santa Claus himself murders his way through a house of trained assassins? Give director Tommy Wirkola credit: Even the most studied child of holiday exploitation couldn’t have seen this coming. And despite a premise that seems destined to overstay its welcome, the biggest Christmas miracle of Violent Night is that the whole thing hangs together surprisingly well.

’Twas the night before Christmas, and a drunk and disheveled Santa Claus (Harbour) is stumbling through his annual obligation of delivering presents to children worldwide. Frustrated by today’s youth – who only seem to desire cash and video games – Santa toys with the idea of throwing in the towel on Christmas altogether. But when Santa finds himself trapped at a luxury home in the middle of a hostage situation, he must channel a little bit of Christmas magic to become the unstoppable killing machine he was in his youth.

On paper, Violent Night is a tonal nightmare, one whose uneasy marriage of action, humor, and rank sentimentality seems tailor-made for Redboxes everywhere. Granted, the film is never far from complete collapse. There are too many competing elements in play for any single storyline to truly shine. When the film leans too heavily into violence, it undercuts the comedy; when the comedy takes center stage, it makes for an awkward bedfellow with the hard-R violence that defines the fight sequences. It’s a tricky line to walk for a Christmas movie – even one as unconventional as this – and Violent Night is not above the occasional stumble.

But somewhere along the line, the film producers made two key decisions. The first was casting David Harbour as a holiday icon by way of Bruce Willis’ John McClane. It’s not a stretch to say that Harbour makes the entire film work. His in-world character seems as surprised at his presence as the audience, and Harbour’s commitment to playing Santa as a befuddled everyman who happens to know a little magic is one of the film’s best bits. The result is a Santa Claus uncomplicated by backstory, which gives Harbour all the latitude he needs to find a winning character amidst the madness.

And the second smart decision? Putting the film in the hands of Norwegian director Tommy Wirkola. Best known for his duology of Nazi zombie movies – Dead Snow is okay, Dead Snow 2: Red vs. Dead is borderline brilliant – Wirkola is the rare director who can juggle a dozen different tones without ever succumbing to the shuffle. In a lesser film, the Home Alone homages of Violent Night would feel forced and pandering, but Wirkola finds the subtle discomfort in the Home Alone franchise, tapping into the grotesque body violence that the Wet Bandits suffer at the hands of a child. No matter where the story takes his film – from comedy to action to Hallmark levels of sentimentality – Wirkola sustains this unholy marriage of genres.

Somehow, it all works. The barrier to entry for Christmas classic status remains low in Hollywood, and Violent Night will easily slot into rotation alongside movies like Krampus as holiday counterprogramming. And if the film manages to blow the doors off the box office this weekend – hey, this is the year Terrifier 2 released wide, anything is possible – this may not even be the last we’ve seen of David Harbour’s Murder Claus.