In the latest release from the recently revived Austin-based Drafthouse Films, Dutch provocateur Alex van Warmerdam (Voyeur, The Dress, Borgman) begins with what feels like misdirection, focusing on everyone around Günter (Dewispelaere) but not Günter himself. Not surprising, since he seems to avoid honest interaction (of course his chosen career is as an actor). He keeps his adult daughter at very precise distance, and is in a secretive affair with a fellow actor (Pheifer) whose husband (Kesting) is directing them both in a new play. He deliberately ring-fences these elements of his life – potentially a defense mechanism, allowing him to remain incurious about the mystery of his childhood.

Luckily for him, everyone else seems very interested in his life: a jealous cast mate (Bokma, a fine portrait of a middling talent whose career is slipping away), a cuckolded husband, the mysterious group who seem to have him under surveillance, a bishop obsessed with women’s track and field. Some of this – the simplest parts, the interpersonal drama played out in the rehearsal room, the power dynamics between actors and directors – are genuinely fascinating and darkly fun, as director Karl quietly abuses his position for his own ends.

If Warmerdam had kept to that refined perspective, with quibbling about blocking and line delivery, then Nr. 10 might have become more of a complete film. But instead it gets buried under Günter’s sudden shift from his own supporting character to the central figure, searching for his lost mother and seemingly in the middle of some quasi-religious conspiracy. It’s almost as if Warmerdam (who also wrote the script) felt obligated to be Warmerdamesque, injecting weirdness and suddenly shoving Dewispelaere midframe while still expecting him to be a passive figure. That might have worked if the final reveal about Günter’s mysterious origin as a foundling had a little more Kaspar Hauseresque questioning of identity to it. Instead, it devolves into a slightly silly and thematically threadbare disappointment. 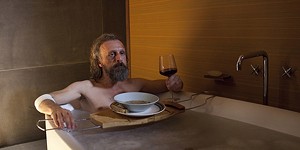 Borgman
This Dutch film is a darkly nuanced fable that keeps us consistently off-balance.