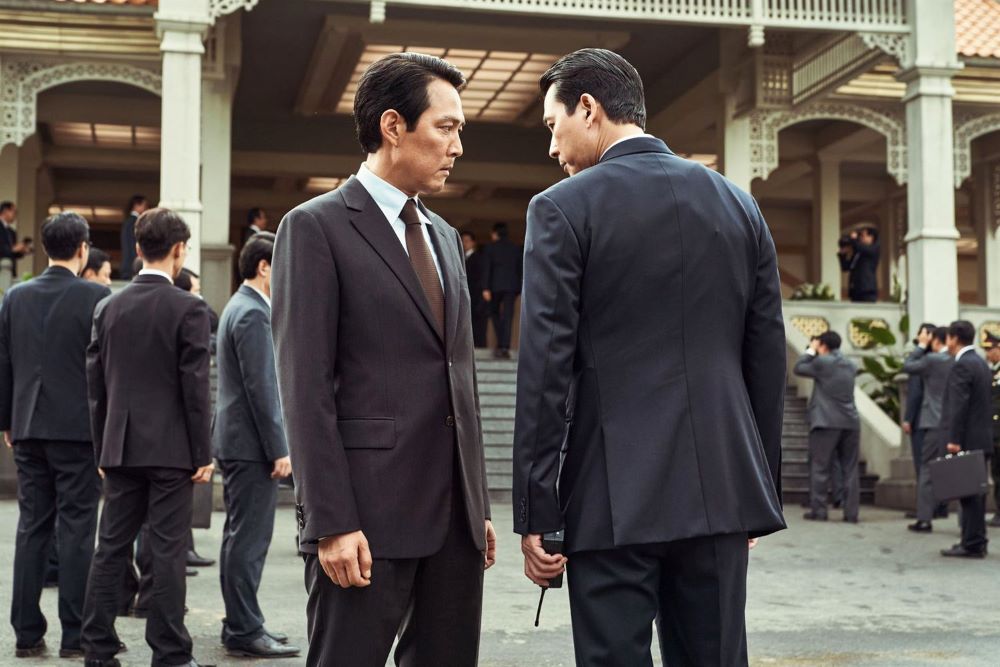 Donglim. It's the name of a ghost, a myth, a boogeyman in South Korean intelligence community circles, a North Korean spy who has eluded all searches and funneled crippling information across the border.

In his directorial debut, Squid Game star Lee Jung-jae has crafted a brutal, razor-sharp spy thriller carved from the same flint as morally murky crime flicks like Infernal Affairs, Beat Takeshi's Outrage trilogy, Heat, and his own performance in 2013 undercover drama New World, where all sides of the law are locked in a death spiral of self-recognition. But the stakes are infinitely higher than a heist or a few dead cops and crooks: Burning in the background is the threat of full-blown war between the two states and millions dead.

That's what's reinforced for the audience as the search for Donglim just becomes a pretext for the gang war that starts to rage between two officers of the Korean Central Intelligence Agency: Foreign Unit Chief Park Pyong-ho (Lee pulling quadruple shifts as producer, co-writer, director, and star) and Domestic Unit Chief Kim Jung-do (Jung, The Good, the Bad, the Weird). Tempers fray when an assassination attempt is made against the unpopular self-appointed president (never named, but clearly coldly savage dictator Chun Doo-hwan), and friction turns to smoldering resentment as as a series of operations fail, all seemingly because of Donglim. Even as the threat the mysterious figure poses becomes ever more deadly, the titular hunt for the spy becomes an excuse for vying entities to cut each other off at the knees. Macho hubris and jockeying egos are enabled by Lee's real target as a storyteller, the terrifying corruption within the military dictatorship of 1980s South Korea, a malevolent regime that enabled torture and disappearances, all depicted in grueling manner here. In a searing indictment of both protagonists, they'll stand and calmly observe, only adopting moral outrage when it affects someone close to them.

Caught with a mixture of cool reserve and neck-snapping energy by director Kim Jee-woon's longtime cinematographer Lee Mo-gae (I Saw the Devil, Ilang: The Wolf Brigade), Hunt is an ugly morality play, briskly told and given chilling, crackling energy by Lee and Jung. Drawing heavily on real-life atrocities, human rights violations, and diplomatic incidents that nearly spiraled into full-fledged war, it twists and turns in the mire of broken allegiances, and somehow makes both men more sympathetic the more compromises they make.