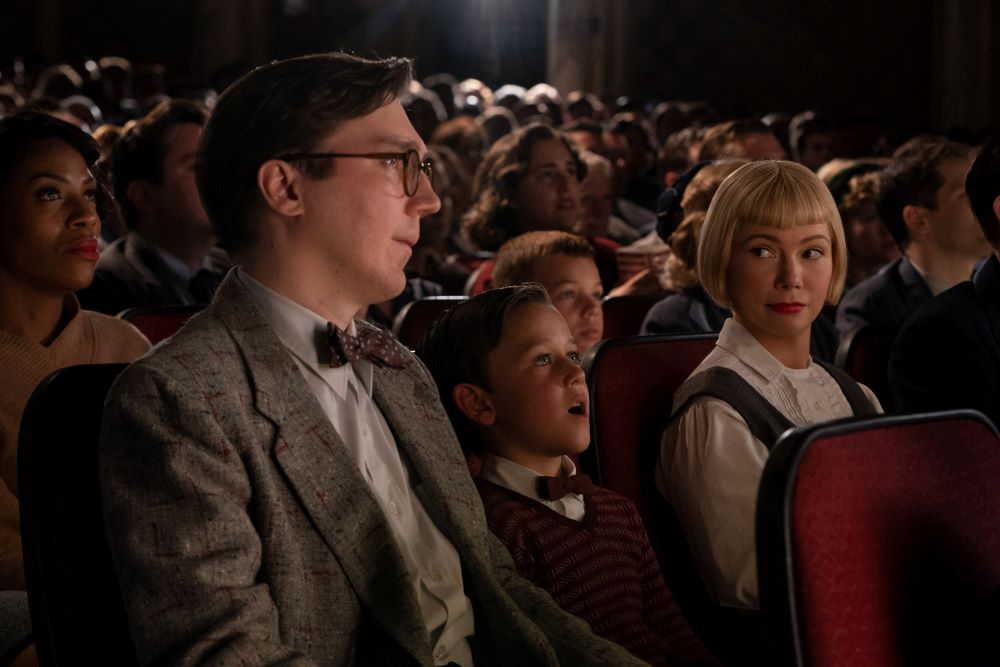 Steven Spielberg, arguably the most popular and commercially successful film storyteller of all time, delves into his personal history for story material in The Fabelmans. No sharks, no extraterrestrials, no Nazis, pirates, or dinosaurs this time as narrative antagonists; here, Spielberg looks to his past and his early family life in what might be considered an authorized biography. Spielberg’s “Portrait of the Filmmaker as a Young Artist” is his most personal work, and as such it marks an atypical storytelling approach for the moviemaker. Yet, in going personal, Spielberg has lost none of his popular appeal (the film won the People’s Choice Award at the Toronto International Film Festival, usually a harbinger of future accolades). While the film provides many invaluable insights into Spielberg’s technical and thematic tropes that can be seen repeated throughout his career, the filmmaker also burnishes aspects of his life story and leaves out chunks of years to create what is inevitably a self-indulgent yet delightful origin story, appropriately called The Fabelmans.

Almost as much as the film tells the backstory of how the filmmaker discovered his vocation and learned his chops, The Fabelmans is also the story of Spielberg’s parents and their dichotomous approaches to life. As Mitzi and Burt Fabelman, Michelle Williams and Paul Dano deliver brilliant performances (as does the rest of the well-chosen cast), he the genius scientist who would prefer that his son, Sammy (played by LaBelle in a careermaking performance and by Francis-DeFord as a young child), made useful and tangible things rather than imaginary film stories and entertainments, and she a proponent for the arts and following your heart’s desires.

The couple is a fascinating pair and sometimes their story threatens to overwhelm the young filmmaker’s story. It’s as if Spielberg were still trying to explain it all to himself, especially now with the distance of them both being deceased and the perspective of his own parenthood to guide him.

In crafting The Fabelmans, Spielberg harnessed several of his frequent collaborators: co-scriptwriter Tony Kushner, cinematographer Janusz Kamiński, editors Sarah Broshar and Michael Kahn, and composer John Williams – all of whom add their signature polish to this most personal Spielberg delectation. Notably, Sammy’s experiences as a victim of antisemitism also make up a significant portion of the drama, a facet of the story that has become culturally topical again.

In an impactful sequence, a visiting uncle (Hirsch) who had run away with the circus warns Sammy that they are both kindred souls who are “meshuga for art,” but that this characteristic would always come into conflict with family demands. It seems that with the valorization of his parents in The Fablemans, Spielberg is trying to finally reconcile his two loves. Spoiler alert (although not if you’ve seen more than a few Spielberg films): Young Sammy and grownup Steven both find happy endings.