It would be all too easy to compare Devotion to Top Gun: Maverick. As the second fighter pilot drama to star Glen Powell released this year, it’s not unfair to say that it lives in the shadow of the Tom Cruise-starring box-office behemoth, especially given that Maverick is overall a more robust film and having to stand up to its pedigree after the fact is unfeasible. But a direct comparison between the two films also feels disingenuous to the objectives of Devotion’s story, and the fact that this takes on a different tone of aviator heroism. It’s defined by a more sober type of restraint rather than bravura pop bombast.

That’s due in no small part to the tender true story at the heart of the picture. Based on Adam Makos’ 2014 book Devotion: An Epic Story of Heroism, Friendship, and Sacrifice, it follows the friendship between naval pilots Jesse Brown (Majors) and Tom Hudner (Powell) in the midst of the Korean War. But maybe what the film is more prominently about is Brown being the first Black aviator to complete the Navy’s basic flight training and ends up the only Black man in his squadron, perpetually ostracized and constantly degraded, abased, and infantilized. As the new recruit, Hudner has joined the fleet in search of some type of meaning, and soon he and Brown form a delicate, sometimes taut relationship with each other, as well as the rest of the flyboys (with supporting performers including Jonas and Cross).

If you happen to know the story of Brown and Hudner then you know to expect a bit of an emotional journey. Devotion is nothing if not indebted to a litany of preceding war films that act as an assessment of loyalty and friendship in the face of destructive violence, and the gut punch of the real events ensures that the film packs the same emotional wallop as many of its precursors. It’s committed to the hallmarks of the genre, for better and for worse. Though undeniably sincere and crafted with a sturdy visual sense from cinematographer Erik Messerschmidt, there’s as much rote storytelling here as there is surprisingly thoughtful character work. The script by Jake Crane and Jonathan Stewart does little to deviate from the true events, which is admirable in some respects and awkward in others. A detour in which the pilots dock at Cannes and go to a party with Elizabeth Taylor seems to mostly be true, but acts as a somewhat questionable digression within the greater scope of the film.

The whole thing is carried, of course, by its two leads. Powell is effective as Hudner but mostly acts as a functional foil to Majors, who’s in this to steal the show. His portrayal of Brown is tactful and moving, with so much subtle internal love and anger expressed so effortlessly. Brown is a man who just wants to make it home to his wife, Daisy (Jackson), and daughter every day, but he also knows he’s meant to be in the sky, despite how often he’s told that he can’t do it. He and Hudner form an interesting contrast, with the latter’s by-the-book sensibilities at odds with the lived experience of a man who has learned the necessity of breaking the rules that seek to subjugate him. Their dynamic helps to lift a film that can otherwise be stiflingly prosaic. Though, if nothing else, its Thanksgiving release makes it an inoffensive respite with the family while at home for a couple of days. The parents will love it and weep. 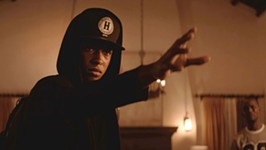 Sleight
A street magician must save his kidnapped sister