In a close-knit community in Ireland's County Donegal, the men fish the waters, and the women work at the fishery. The town is small enough that, when the women are on a smoke break at the factory and an ambulance arrives at the water’s edge, the women run straight for the shoreline. There’s been another drowning – a regular enough occurrence in these rough waters, it would seem. But what’s startling is the admission that it’s considered bad luck to teach children how to swim. The current is so strong, they don’t want to encourage anyone to risk drowning by aiding someone else actively drowning. The smart play is to choose not to take action.

And in God's Creatures, inaction is a choice in itself, as when fishery foreman Aileen O’Hara (Emily Watson, quietly towering) chooses not to ask too many questions of her twentysomething son Brian (Normal People breakout Paul Mescal) – where he disappeared to for years on end, and why he’s suddenly returned home, eager to start back up the family oyster farm. Aileen and Brian have a special connection – he’s all wide smiles, she’s tender and indulgent – but when an accusation is made against Brian, Aileen makes a choice and must live with its rippling effects.

The effects are not good. But you already knew that from the under-the-skin score by Danny Bensi and Saunder Jurriaans, dominated by percussion that mimics the clacketing of oyster shells on the factory line and halting strings that recall foghorns and a bone-deep feeling of unease. The sound design ups the ante, making palpable the wind and rushing water.

For all the fierceness of the elements, co-directors Anna Rose Holmer and Saela Davis, who previously collaborated on the well-regarded 2015 indie film The Fits, are in no rush here. They’ll spend minutes on Aileen in her kitchen, alone, smoking a cigarette and fretting; that commitment to stillness pays off in dividends during the film’s few moments of violence – startlements that work like a jolt of adrenaline until the film returns to its natural resting state of stillness, alertness, unease. Beautifully acted and stubbornly resistant to easy catharsis, God’s Creatures drifts to an end in a final, minutes-long shot. It’s an ellipsis, not a full stop, and feels true to what’s passed and to what keeps these people going: that life is just something you learn to live with. 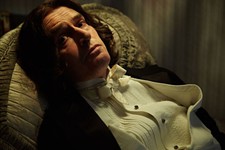