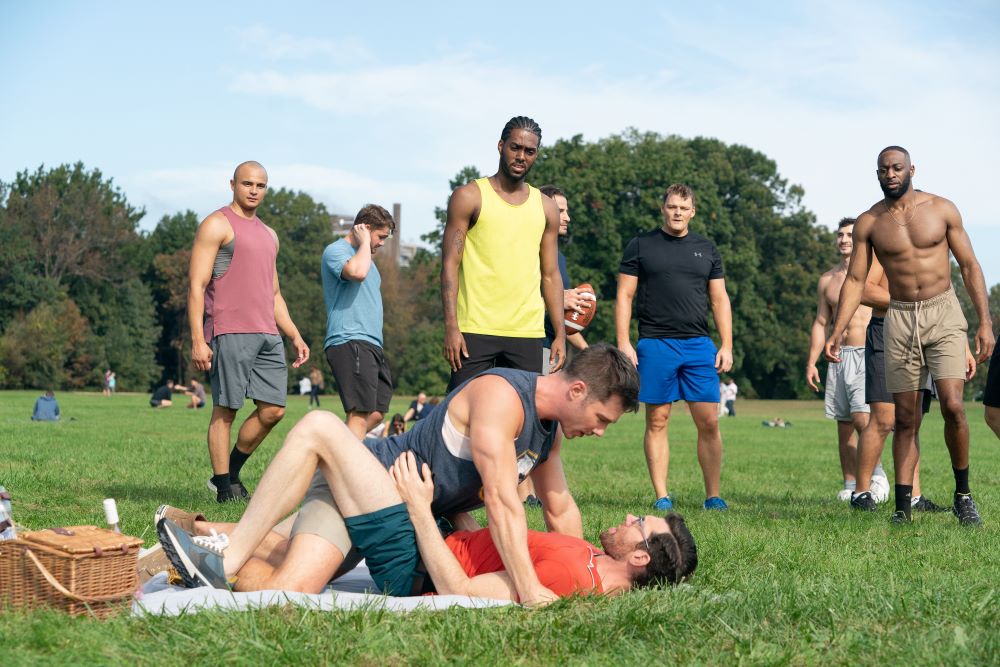 Bobby Leiber (Eichner) is at that age. He's at the point where he still goes to shirts-optional clubs and has swiped right on Grindr a lot. Yet even though he stays in good enough shape to impress if he needed, he's most comfortable chatting with the older guys about how these young hookups probably don't have a thought in their heads. So of course he's not going to try to fall in love with the corn-fed abs and small-town conversations of Aaron Shepard (Macfarlane), but can he resist this "gay Tom Brady"?

Rom-coms, gay or straight, are about the will they/won't they. Bros may not be the first gay rom-com, but it is (as the producers have made it known) the first gay romantic comedy from a major studio featuring an entirely LGBTQ principal cast. Moreover, it's a deliberate effort by director, co-writer, and rom-com veteran Nicholas Stoller (The Five-Year Engagement, Forgetting Sarah Marshall) to get inside modern gay relationships – or, more especially, affluent, white, middle-class, cis gay male relationships in New York.

Like all modern R-rated rom-coms, Bros has an element of sex comedy about it, mostly about the awkwardness of one-night stands or of asking and receiving. It's arguably less explicit than something like another Stoller project, Forgetting Sarah Marshall, but with a lot more exposed skin than When Harry Met Sally…. Those scenes really show how often Hollywood in the past has othered any kind of queer sexual contact, and find a different kind of humor: the gay perspective on the ridiculousness of gay sex, just as any scene with some suitor thrutching obliviously on a bored Sandra Bullock shows the ridiculousness of straight sex. (Three's company, four is just awkward, as one of the best cringe sequences shows.) Most importantly – and it's stupid that we still have to say this – it's gay sex in a mainstream, multiplex-ready movie that's not about AIDS or pushing aside closeted shame. It's about love and passion and fun, and occasionally an awkward sense of obligation.

And, of course, what really matters is the relationship. Eichner and Macfarlane have a fresh and unique energy when it comes to rom-coms – and it's not just because they're two guys. As Leiber, Eichner tones down his early histrionic and playfully acerbic comedy style for something a little more bitter. There's a delicious edge of frustration to Bobby's self-pitying yelp whenever Aaron just disappears (a habit of his) midway through a conversation, while Aaron melts into the floor every time Bobby devolves into the kind of self-righteous cliche that he clearly never wants to be. Eichner and Stoller have written a script that, in some ways, echoes Matthew Lopez’s epic Tony-winning drama The Inheritance in its themes of honoring without emulating gay history, even if it's done through the slightly heavy-handed mechanism of Bobby working on the advisory board of a new LGBTQ museum (although this does allow for Jim Rash to fume about bi erasure).

Now, as a cis heterosexual man not living in New York, I can't honestly say how accurate this all is – but that's not the point. Eichner and Stoller have done something important in making a comedy about modern gay love that says it's just like modern straight love – well, no, scratch that. Their whole film is about showing how modern gay relationships aren't quite the same as modern straight relationships, but the differences aren't important. Well, they are, but not in the ways that bigots and morons want them to be. They're not bothered about explaining, but they are quite happy to show audiences their experience, and let them play catch-up. And, yes, when you get to the end, you'll get that happy ending. It's a rom-com, after all. 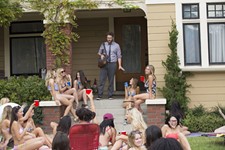