With a title like Three Thousand Years of Longing, George Miller’s highly anticipated follow-up to the blockbuster hit Mad Max: Fury Road sounds like it should be a hot and sweltering epic romance to end the summer on, some good, classic, high-octane fun before the fall hits us with awards season fare. Starring powerhouses like Tilda Swinton and Idris Elba, you’d expect nothing less. Instead, Miller’s latest feels like a film that’s been waiting to be released since the late 2000s, a CGI-driven adventure that zooms through time and space with wannabe Tarsem Singh visuals and an overstuffed story that is never given room to breathe.

Three Thousand Years of Longing is One Thousand and One Nights lite. Swinton plays a character of solitude, Alithea: a divorcée who enjoys academia and travel. While on a trip to Istanbul, she finds a strange glass object in an eclectic antique shop and an urge overcomes her to purchase it, not knowing that a djinn (Elba) resides in its depths, patiently waiting to be released. Alithea eventually does just that in the comfort of her hotel room – after she accidentally breaks the glass bottle while cleaning it, Elba’s muscular body bursts into the hotel room, all electricity and abs, and thus their story begins.

The first half of the movie focuses on the djinn’s journey: He tells three tall tales selected to unleash desire within Alithea, create a yearning so powerful that she uses the three wishes she has been given wisely, so he can move on from his prison. Alithea’s yearning, though, is difficult to connect with. Miller’s speedy pacing and off-putting use of humor create a mixed bag, leaving each story less satisfying than the one before it. Neither sweeping nor enchanting, the djinn’s choppy lifelong lessons feel shallow and dull (not to mention, the djinn’s second tale is chock-full of fatphobia, which is a disappointment to say the least).

Yet, somehow, Alithea becomes transfixed by the djinn, and the second half of the movie turns into a soft romance between the two. She delights in learning about her new lover, but always ponders if his feelings are genuine (she does, after all, use one of her wishes to make him reciprocate her yearning). The contrast in the tonal shift is bold, but jarring – suddenly Miller’s film feels like an entirely new beast. Miller’s own storytelling is as sloppy as the djinn’s, and the longing he so wishes for us to partake in feels forced, unearned, and alienating. Where Mad Max: Fury Road was lean, Three Thousand Years of Longing feels like a rough draft that should have stayed in a dusty bin somewhere in the middle of a tourist shop. 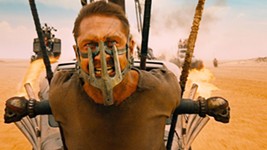