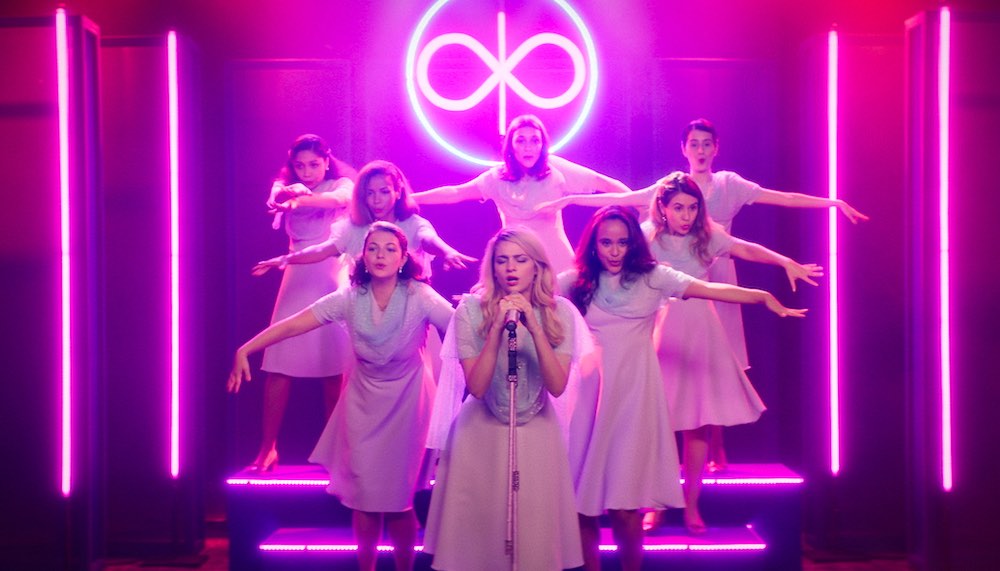 Medusa begins with an exorcism. A woman, arched backward, body folded in half, walking on all fours staring into the camera, dancing in a possessed fervor to hypnotic synth music, drenched in orange-and-green neon. The woman’s form is unnatural, aimed to make the viewer uncomfortable. Slowly it’s revealed that the dance is being seen on the phone by a young woman taking the bus, but the woman is unsafe. Trailing closely behind is a girl gang, wearing plain white masks, stalking her. They beat her, slut-shaming her for her “sins.” They think they are protecting her by punishing her into submission.

Anita Rocha da Silveira’s fantastical horror film was written in retaliation to the rise of evangelical Christianity in Brazil, and the power the religious group is gaining politically. Her film isn’t subtle, following a group of women who believe in their faith so vehemently that they roam the streets at night attacking any woman who walks freely. Medusa focuses on Mari (named after the actress playing her, Mari Oliveira), a woman in the sect whose face becomes permanently scarred after a strike goes horribly wrong. The attack sends her on a journey to find Melissa, a woman of myth who was allegedly the first victim of this group’s violence – branded a home-wrecker – whose beautiful face was burned in order to purify her soul. This fable leads Mari to take a job as a nurse in a clinic for coma patients, in the hopes that Melissa lies there.

Medusa is the kind of horror film that should feel biting, a protest against a growing political climate that threatens the safety and rights of women in da Silveira’s home country. Yet the intentions are more admirable than the sum of its parts. There are some interesting recurring motifs throughout, like the mirroring of Mari putting lip gloss on a new recruit versus Mari applying Vaseline to the mouths of her patients, and how taking care of bodies feeds into her growing tenderness toward those who are suffering. Images of snakes shadow her throughout the film, creating a striking visual that blends the Medusa mythology. The myth, after all, stems from the demonization of Eve, so it should come as no surprise that Medusa is about women finding their inner demons, the ones that make them screech in agony, screaming for freedom from the patriarchy.

In a climactic scene, stripped from Eyes Wide Shut, Mira and her closest friend, Michele (Tremouroux), attend a party in the middle of the forest, where everyone is wearing masks and dancing with a sensual intensity. The celebration is cut short by the Watchmen, a group of toxic men that “protects” the town from sin. It’s a scene that should feel explosive, joyous until it’s painful to watch, but it falls flat, because unlike Kubrick’s masterpiece, there’s nothing magnetic about Mira’s journey.

These kinds of bizarre, dreamscape moments make Medusa never necessarily dull, but it’s like watching someone throw bright pink pudding at a wall to see if it sticks. What begins as a punchy, feminine-biting satire becomes fuzzy after the first act. It’s an admirable effort, but an overstuffed, demanding one as well.