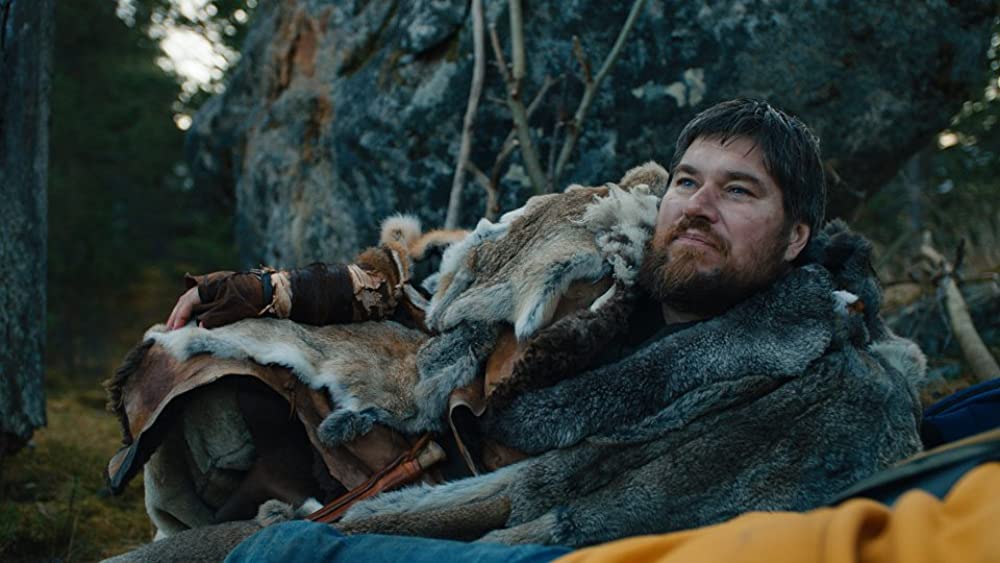 Martin (Bjerg) may look like a Viking, but he's actually just a regular modern guy with some issues. The oddly oblivious protagonist of Danish social comedy Wild Men, he's taken to the mountain life surprisingly well, if not quiet as well as he thinks. He may have learned how to hunt a bit, but his Grizzly Adams existence doesn't involve giving up his headphones and folk tunes. But he's trying, like when he engages in a little back woods medicine on Musa (Youssef). "I need an adventure," he tells the hapless intruder on his mountain retreat, who's on the run from something a little more serious than midlife angst.

Superficially, what's missing from the lives of these men is a sense of reasoned purpose, and a place in modern society (Martin feels out of sorts while, as an immigrant and a crook, Musa's really on the fringes). But what's really missing for much of Thomas Daneskov's tender and bittersweet comedy is women. They're at the unseen end of a phone call, or talked about as absences: even when one is in the scene, what should be a two-shot is deliberately off-center, leaving her as a disembodied voice and the frame purposefully unbalanced. While Martin rambles on like a discount Danish Walt Whitman about how men are meant by nature to be alone, the very composition of the cinematography makes him look like an amiable fool. That's a point re-enforced by police officer Øyvind (veteran character actor Sundquist) who is in luke-warm pursuit of the hapless duo as they trek to a Viking re-enactment camp. A marginally less world-weary version of Tommy Lee Jones' Sherriff Bell from No Country for Old Men, he appreciates what's missing from his life, even while Martin flees from his concerned wife (Gråbøl).

But there's also some truly entertaining comedy hidden in here about Scandinavia's adoration of Viking history. It comes out in an underlying idiocy that reflects a very Nordic crisis of masculinity - one that, unlike most American cinematic examinations of the issue, doesn't devolve into one-dimensional tropes about toxicity. Jonatan Rolf Mose's purposefully unbalanced cinematography isn't simply about an absence of the feminine, but instead of his characters feeling like they lack a center or a purpose. No wonder Martin tries to find some meaning in a life that plays less like the bold adventuring in Assassin's Creed Valhalla and more like resource-collecting in Horizon Zero Dawn. After all, his "authentic" barbarian experience is more like a video game than any genuine historical vision.

Yet Martin's desperate amiability, expressed through Bjerg's bulky, shambling presence, seems at odds with the simmering crime drama that Musa brings with him. There's never a singular direction for the film and its sub-plots, but instead it's as if Daneskov strikes for a central mood, then lets each element wander a little away from it: not far enough to be disruptive, but never quite cohesive. Like the misguided men it follows, its charm is in its disorder.