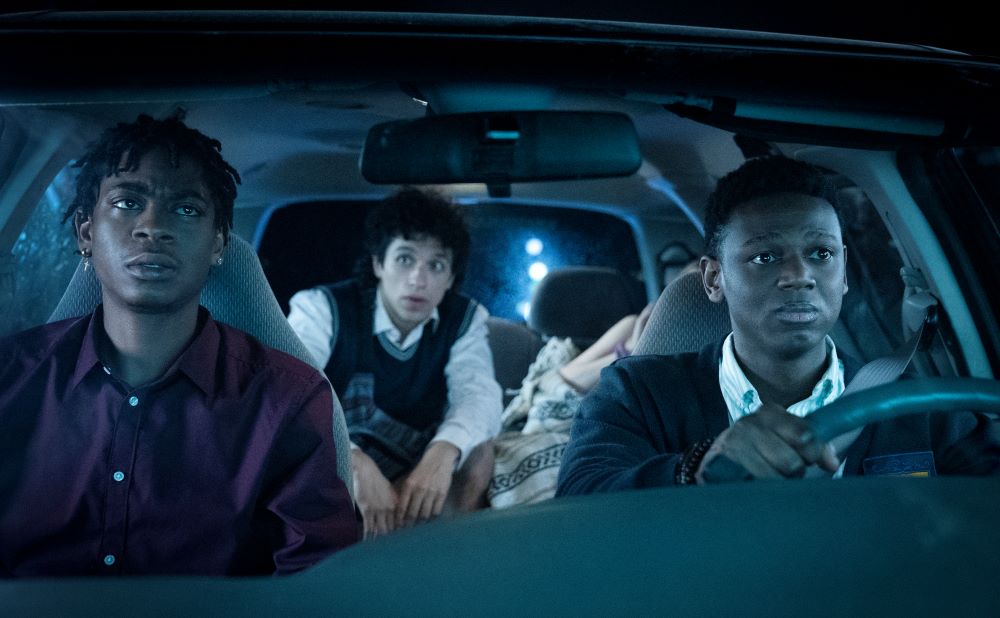 The last hoorah: the pre-graduation rager where a group of friends do a tour of some kind with the hopes that the perfect mix of drugs and alcohol makes for the best night of their lives. As it happens, these movies always spin out – a series of unfortunate events that keeps our protagonists away from having a good time. In the case of Emergency, that prevention is an unconscious, white, teenage girl in the middle of the living room of a college house rented out by three men of color.

The three college boys are Kunle (Watkins), a Princeton-bound wunderkind; Sean (Cyler), a go-go-go party boy; and Carlos (Chacon), a gamer nerd who refuses to leave the house without his fanny pack full of snacks. Their dynamic is crucial, with the exterior drama siphoning out their own inner conflicts, like Kunle not telling Sean he can’t room with him next year (a classic college film trope) and Carlos being the odd man out in the group. Their performances and chemistry with one another are the glue that holds this chaos together, and the almost-deadweight of the girl in the car is a grenade, a ticking time bomb that could go off and escalate the situation, putting the innocent college students in a dangerous pickle.

The ominous threat of two Black kids getting mucked up with the police looms around every corner as the three friends try to figure out the safest way to get this stranger some help. The film is not subtle when it comes to what negligent, casual racism looks like – from a white professor using a college course as an excuse to say the N-word, to a crazy bunch of white frat guys dressed in tribal costumes assuming Kunle is a part of their rival Black fraternity. Emergency is certainly obtuse when it comes to its messaging, but the setting gives the film some fuel, an added familiarity to its storytelling that allows these layers to not feel too grave and stacked.

What Emergency gets right is that it’s usually these careless biases that put people like Kunle and Sean in situations they don’t deserve to be in. A kind person like Kunle values human life above himself, where the white and white-passing folks surrounding him don’t value his. Where the film loses steam is in its configuration; the slow-paced journey from setting to setting builds the tension a bit unevenly in service of the film’s themes. These bumps in the road leave Emergency imperfect, but it’s still a chaotic and thoughtful ride worth hitching onto.