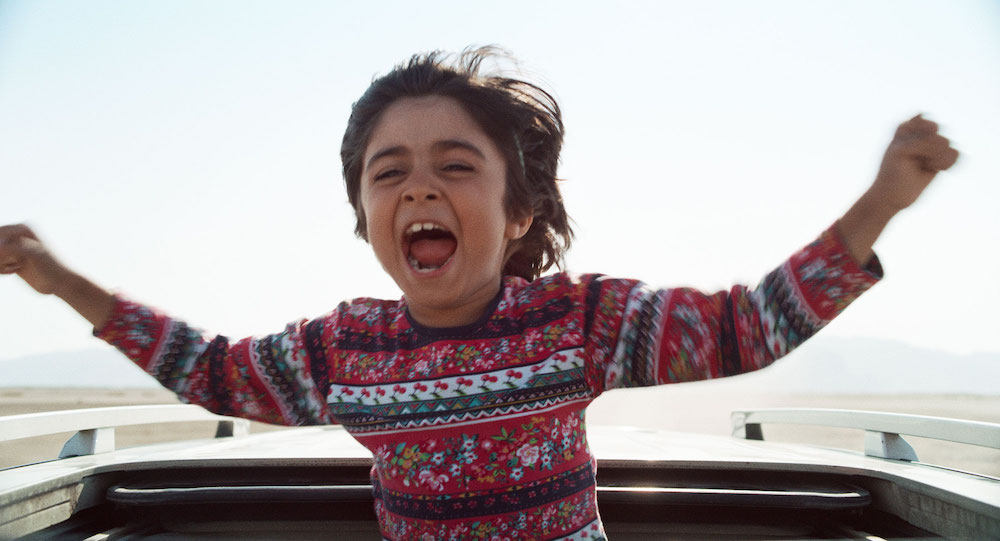 Hit the Road begins with a delicate score, a tranquil moment that’s quickly interrupted by the static of a cellphone, one that’s not supposed to be in the car with the family of four that’s on the run. The younger brother (Sarlak) has smuggled it in, the beginning of many antics from this child whose disruptive nature breaks up the dread of what’s to come at the end of the family’s journey. The young kid is to believe his older brother (Simiar) is going away to get married to a beautiful wife, but the reality is much bleaker, as the family races off to a future where their son is safe from the oppressive Iranian government, but far away from them.

Panah Panahi’s debut isn’t dour, though. It’s speckled with lighthearted moments to offset the looming dread of the finish line: a cyclist who joins the ride after crashing because the child is pestering him out the car window, an overbearing mother (Panahiha) who plucks a tuft of hair from her elder son’s head while he dozes off out the window dreaming of 2001: A Space Odyssey, or a karaoke break where the young child screams to his favorite Iranian pop song. When the going gets tough, the tough crack a joke to lighten the mood. Like Little Miss Sunshine, the road trip is merely a vessel for escalating deeper thoughts and conversations, many of which feel like the musing of Panahi himself.

Panahi is no stranger to his country separating families, because his father, the iconic Iranian filmmaker Jafar Panahi (Offside, The Mirror, Taxi), has been arrested and banned for making his films on numerous occasions. With Panahi’s experience in mind, the film unlocks a more personal story, an odyssey that layers in Panahi’s experience with family separation and his deep admiration for cinema. The father (Majuni), who is often the butt of the joke hobbling around on a broken leg, has sweet moments with each of his sons in the third act. The first is with his eldest over an apple as they sit on two rocks in a riverbed, an awkward conversation between a father and son at an age where tenderness is extracted by way of dental health concerns. The second is more whimsical, with the father and his youngest son discussing Batman. The thermal suit the father is wearing slowly starts to look like an astronaut’s as the earth they’re lying on slowly morphs into deep space. It’s possible to see Panahi as both iterations of the son, one too young to understand the nuance of a difficult family situation and another much older, more jaded, but deeply in love with the art form for which his own father risked his life.

Hit the Road is stuffed with thoughts, ideas, and metaphors, which can leave the film feeling weighty and thick, but for those willing to dig and see past its simplistic charms, it’s quite an ambitiously layered debut.