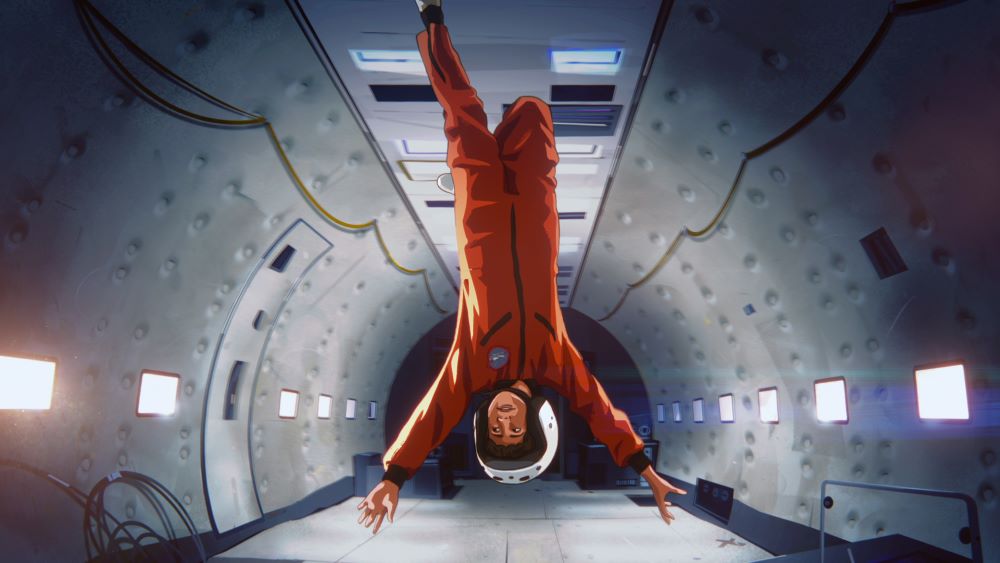 Apollo 10½: A Space Age Childhood sees director Richard Linklater returning to his roots in more ways than one. The Texas icon whose oeuvre is so often defined by his nostalgic head trips and loose, freewheeling hangout structures has again crafted a story that allows him to utilize those qualities in a film that mines material from his own coming of age, not unlike his seminal Dazed and Confused. Couple that with his return to rotoscope animation after Waking Life and A Scanner Darkly, and you have the most true-to-form Linklater film since 2016’s Everybody Wants Some!!

Apollo, naturally, is set in Linklater’s hometown of Houston. Playfully crossing historical revisionism and nostalgic waxing about the touchstones of his childhood, it follows a young boy named Stanley (Coy) as he grows up in the late 1960s under the shadow of NASA at the height of the growing excitement of space exploration, in anticipation of the eventual Apollo 11 moon landing. NASA is an inescapable part of everyday life for Stanley – practically everyone he knows works for or knows someone who works for them in one way or another. It isn’t long before Stanley finds himself at the behest of the agency. Almost on a whim, he’s plucked off the school playground by some suits for help with a special task: a preliminary test trip to the moon in a lunar module that was built a tad too small.

The idea is something of a fantastical anchor to a film whose actual through line is more concerned with the vivid depiction of specific time and place. The era and city in which Linklater grew up is depicted here as a time both simpler and more hazardous in ways a child wouldn’t pick up on until years down the road – those anecdotes narrated by Jack Black as an older Stanley guide the film through its carousel of memories from an older perspective. A generous portion of the run time is devoted purely to fond descriptions of being a child in 1969 and what it was like going on a trip to the local amusement park, the family dynamic at home, escapades with other local kids around the neighborhood – anything and everything. Stanley’s actual trip to the moon isn’t necessarily an afterthought, but maybe more of a grace note the movie lands on as a culmination of Stanley’s entire childhood as he takes one small step into his future.

The amorphous structure may be off-putting for those looking for something more traditional from the logline of “animated movie about a kid that goes to the moon,” but this outline of a childhood is unburdened by conventional design. All of this is conveyed through the beautifully and uniquely drawn and rendered character animation, a style that allows the film to portray all of its bygone cultural hallmarks with a singular visual verisimilitude. It makes this vision of the past feel like personal manifestations of recollection, Linklater’s preoccupation with time once again taking the ultimate forefront of what his projects are really about. It may feel somewhat slight when it’s all said and done, but Apollo is packed with Linklater’s unique voice and breezy attitude that makes you feel right at home.