Even if your reason for watching these annual programs of Academy Award-nominated short films is purely financial – i.e., to get a leg up on your competitors in your Oscar pool – you’ll find rewards greater than potential gambling profits in these collections of films. Each film has already been chosen as a top-ranked contender in its category by Academy branch voters, and can therefore be almost considered as part of a curated showcase. Processes of elimination have already culled the submissions down to the top five contenders, so that viewers can be assured of a program that presents the best of the best.

Of the five films in this Live Action program, only one hails from the United States. So, if nothing else, the program is a bit of a stationary junket to other locales. All the films provide a strong sense of place and narrative specificity. “On My Mind” by Martin Strange-Hansen (a former Oscar winner in this category) is a good example of that. Set in Denmark, the film tells a puzzling story about a man who wanders into an empty bar and insists on performing a particular karaoke song. He has his reasons, which aren’t revealed until the end, but until that point, “On My Mind” offers a glimpse of three well-drawn characters, their interactions, and their surroundings. It’s a story that could take place almost anywhere, but, nevertheless, occurs primarily within the confines of a memorable bar.

“Please Hold,” the U.S.-made film by K.D. Davila, has a provocative premise and a distinctive setting. A science-fiction story set in the fully automated near-future, “Please Hold” depicts the plight of a young Latino man who is incarcerated by society’s computerized system in which there are no human beings to intervene on behalf of his release. He is trapped in a Kafkaesque situation and most of the action takes place in a imaginatively detailed prison cell.

“Ala Kachuu” (“Take and Run”) tells a harrowing story about bride kidnapping in Kyrgyz. Made by the Swiss filmmaker Maria Brendle, the film makes arranged marriages, by contrast, look like a positively modern social development. This brutal cultural tradition traps the film’s heroine, a girl who moves from the countryside to the city to study, in an untenable position that evokes strong viewer empathy.

Riz Ahmed, who was nominated for multiple acting awards for Sound of Metal a couple of years ago, stars in the British film “The Long Goodbye.” It’s a short, hand-held drama by Aneil Karia about a crowded Muslim household readying for a celebration that is cut short by a sudden and deadly police roundup. In a brief amount of time, the film gives way to a variety of emotions, ending with a piercing poetic declaration.

Finally, “The Dress” by Tadeusz Lysiak of Poland is a wonderful character study of a motel maid. A little person, Julka figures that her uncommon stature requires her to eliminate the possibilities of love and sex from her life. Then she gets her hopes up when a handsome trucker rolls in. Within the course of a half-hour, we witness a solitary character undergo a range of emotions and new experiences. Again, it’s a universal story told with a view into an unfamiliar world. 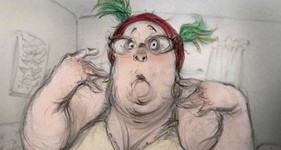