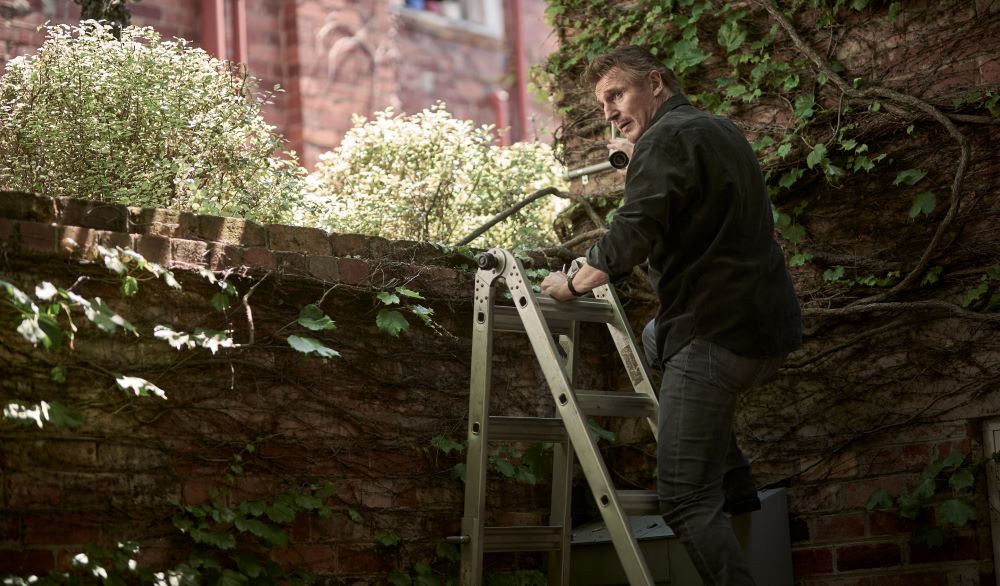 The world of government secrets and undercover agents should be a lot more exciting than what Blacklight has to offer. Yet another clunky thriller predicated on having Liam Neeson afford it some form of legitimacy, this Mark Williams-directed film is part political intrigue, part actioner, part family drama – all destined for the bargain bin. If nothing else, it’ll be a great addition to whatever $10 “Neeson Five Film Collection” DVD it ends up a part of on Walmart shelves in a couple years.

This time around Neeson is Travis Block, an agent for the FBI who specializes in saving the skin of undercover agents who have bitten off more than they can chew (don’t worry – Neeson does yell at someone that they’re “in too deep” in complete earnest). He’s great at his job, but at his maturing age and with a family he wants to spend more time with, he tells Director Robinson (Quinn) that it’s his time to retire. Like clockwork, this is just the moment when he becomes embroiled in a conspiracy that forces him to stay in the game just long enough for one last assignment – one that may lead back to his very own agency.

This story is no remarkably ingenious piece of conspiratorial pulp, to be certain, but in the right hands it could have been a sturdy little genre affair. It only takes 10 or so minutes to figure out that won’t be the case here. The debut screenplay from Nick May (and co-written by Williams) lumbers apathetically through plot beats with all the enthusiasm of the same half-awake coma viewers may find themselves in. The plot drifts through various storylines and intersecting characters that never feel particularly cohesive or interesting; a subplot about journalist Mira Jones (Raver-Lampman) who gets involved in events by trying to bust the story open feels especially languid. It’s a script that sabotages everyone and everything in its path: No performance here is good, but that’s no immediate fault of the actors given what they have to work with.

There’s less action here than you may expect, often opting for a slightly more subdued quality, which may be commendable if any of the drama or action were at all stimulating. If you’re not watching actors stumble through awkward dialogue, you’re watching a fight or a shoot-out that looks fit for a daytime crime show. There are gestures toward a movie with a bit more interest in true cinematic verve – a car chase where Neeson pursues a target who is recklessly driving a dump truck through city streets brings things to life momentarily, but this is of course fleeting. Don’t worry, what this lacks in craft or story it compensates for with weird cultural commentary about woke millennials and social media. Someone at one point talks about how, “Nowadays this world is ruled by ‘gotcha’ moments on Twitter,” like that’s some kind of grand societal statement. If that sounds like your kind of thing, Blacklight is here to serve you. For anyone else, well, I’m afraid even an actual black light wouldn’t reveal anything worthwhile at this crime scene.