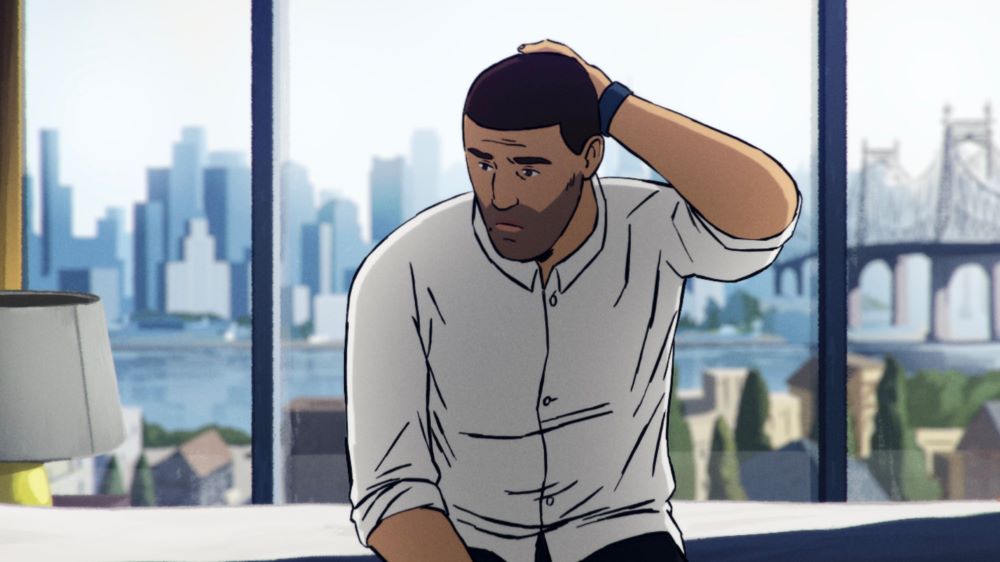 Amin is restless. An impending marriage and the purchase of a new house could make anyone a bit tense, but there are stronger, deeper currents unmooring him. There’s a past he has withheld from his fiancé, a history that he hasn’t stopped to examine himself. But with the help of his high school friend, filmmaker Jonas Poher Rasmussen, he relates his extraordinary story, one grimly familiar yet markedly singular, to the camera. To his partner. To his friend. To himself. Amin is restless.

Growing up in Afghanistan in the Eighties, young Amin’s life is marked by a number of dots connected here. His father is taken in for “questioning” by the communist government that had toppled the country’s monarchy in 1979, and never heard from again. Raised by his mother and older brothers and sisters, Amin discovers, with the aid of Jean-Claude Van Damme, that he is gay. When Afghan authorities attempt to round up Amin’s brother for conscription in the military, the family flees Kabul for Moscow, where they repeatedly attempt to migrate to the West. Constantly avoiding corrupt Russian police and dealing with merciless human traffickers, Amin is witness to heartbreaking degradations and unsuccessful escape attempts, including a particularly harrowing journey in a stripped-out hull of a boat on the Baltic Sea. When, finally, he is able to step off a plane in Denmark, his family has been scattered across Europe, he is a teenager and a refugee. His closest family, one brother and two sisters, are thankfully close by in Sweden.

Director Rasmussen uses evocative Rotoscoped animation to tell Amin’s story, which imbues Flee with a layer of intimacy, further captured in Rasmussen’s and Amin’s introspected conversations about the film itself. In living a life of constantly moving forward, unable to stop for fear of persecution or death, Amin now is given the time to reflect and recognize the motives, the shame, the guilt, the responsibility, and ultimately arrive at fragile acceptance. Flee’s story, Amin’s story, provides for us a valuable mirror with which to understand ourselves, and our desire for meaning in an incredibly harsh universe. In sharing his story with the world, Amin and Rasmussen have given us a truly generous gift.