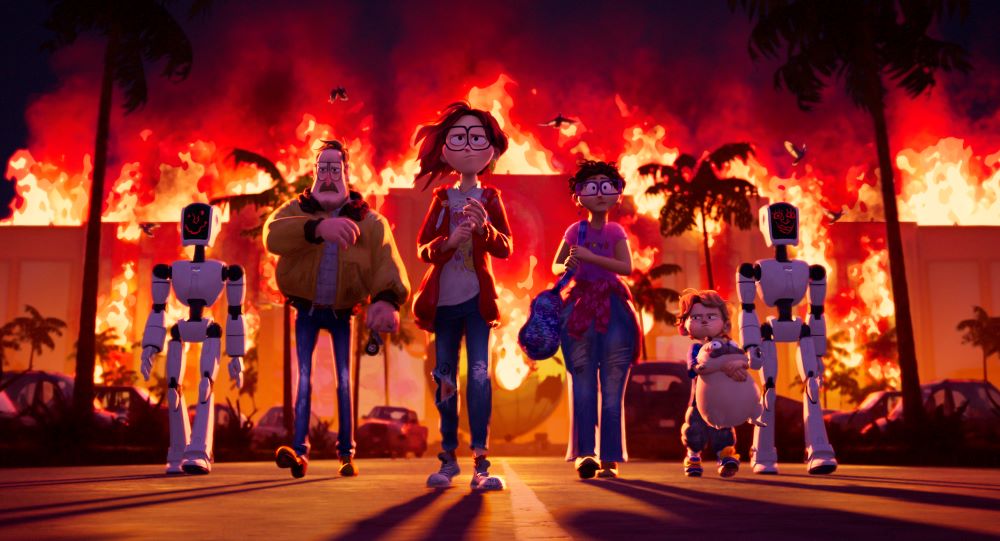 The Mitchells vs. the Machines

Putting the “fun” in “dysfunction” is what The Mitchells vs. The Machines is about, and what family doesn’t have some issues? Even the Mitchells – or, as Katie Mitchell (Jacobson) puts it, the worst family of all time. Well, that’s maybe an overstatement, but teen hyperbole is something adults live with, just as Katie has to deal with how dad Rick (McBride) seems to accidentally stamp over her dreams and then make things worse when he tries to make things better. Like his decision to turn her flight to film school (and away from home) into a family road trip. Sure, she’s fine with dinosaur-loving kid brother Aaron (Rianda) coming along for the ride, and even ever-enthusiastic mom Linda (Rudolph), but a week in the car with dad? What can be worse? Well, the next generation of robotic assistants turning on humanity, for starters.

That this boisterous, blissful, and goofy animated flick was produced by Phil Lord and Christopher Miller will justify any comparisons to their gleefully anarchic and innovative work on The Lego Movie and Spider-Man: Into the Spider-Verse, but the real roots of this uproarious family comedy lie in the Disney Channel’s cult favorite, Gravity Falls. Rianda and Rowe both wrote for the animated show about two kids spending the summer in the wilderness with their curmudgeonly great uncle while strange and supernatural events transpire, and they have only honed their grasp of intergenerational dynamics and bizarre sci-fi comedy into something even sharper and fluffier with the Mitchells (series creator Alex Hirsch even gets a story consultant credit here). It wouldn’t be hard to imagine the Mitchells rolling into the show’s Mystery Shack, and Rick getting ripped off by Grunkle Stan while Katie and Wendy bond about the weirdos in their lives. It’s in no way derivative of the show, but it has that same giddy blend of heart, humor, and adventure.

What’s delightful is that every member of the Mitchells is adorably dorky in unique ways, yet they always feel like a family, especially in the midst of the film’s incredible and innovative action sequences. It’s deep in the design of the film: the hyperkinetic energy of the fast-moving story gives space for intriguing little hints about who each character is, like the way that everything related to Rick has a hand-carved feel to it, or how big events get Katie’s stylized back-of-a-notepad doodles and giddy Flash animation, or how the realm of the world-domineering PALs is a gorgeous, neon-edged Tron riff. None of that is to just look cool: Instead, it feeds into a touching family story that asks us all to have a little more understanding for those close to us. At the same time, The Mitchells vs. the Machines doesn’t pull any punches about the perils of oblivious IT dudebros (personified by Eric André as Silicon Valley knucklehead and accidental Armageddon invoker Mark Bowman), and that just makes Rick’s technophobia just a little more poignant and on point.

But while The Mitchells vs. the Machines has its points to make, it’s also deftly funny, and never didactic. You’ll care about the message because you’ll care about – and probably identify with – the Mitchells. Can they survive the robot apocalypse with only their questionable smarts, their lovable dysfunction, a kind-of dog, two hilarious malfunctioning robots (Armisen and Bennett in fabulous bickering-duo mode), their personalized No. 3 Robertson head nonslip screwdrivers, and a burnt-orange 1993 stick shift station wagon called Iron Eagle? Of course they can. They’re the Mitchells, and you’ll love every second on the road with them.

The Mitchells vs. the Machines, Michael Rianda, Jeff Rowe